Bird, who partners Davide Rigon and Miguel Molina in the #71 AF Corse-run Ferrari 488 GTE, believes Balance of Performance games were being played by the Ford Chip Ganassi squad ahead of race week.

The quickest Ford GT during the test day was the #69 car, which set a best time of 3m57.526s in the hands of Richard Westbrook.

This was 2.8s off the ultimate class place established by Corvette driver Oliver Gavin, and a shade under six seconds slower than the 3m51.534s best set in last year's race.

While Ford did not complete a qualifying simulation on the test day, Bird questioned the similarity of all four of the Fords' lap times, which were all within six tenths of a second.

"I just find it amazing that they say they are struggling when all their drivers were so close to each other, all nine of them," Bird told Autosport.

"If that is their genuine pace, fair enough for doing that, but I don't think I have ever heard of that before at Le Mans. Let's put it this way: it is unusual."

The closest matched car was the #66 Ford GT trio of Olivier Pla, Stefan Mucke and Billy Johnson, who all set best times all within 0.142s of each other. 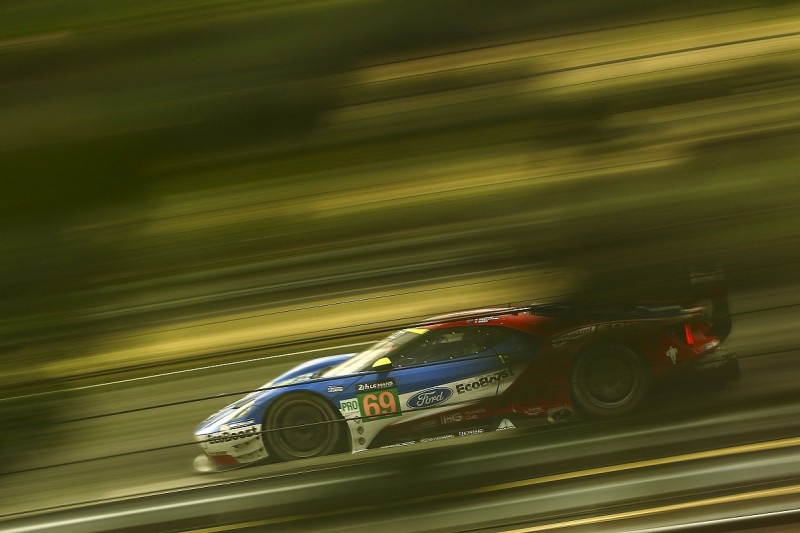 "I think it is a big shame that this game is being played like this," continued Bird.

"I would prefer the racing to just happen on the track, you go as quickly as you possibly can.

"If you're not quick enough, you go testing and you develop it and you make it quicker.

"I understand why we have BoP, I understand the reasons and the implications of it, to make it better for the viewer - because you don't want a car which is three-seconds a lap quicker.

"But it can be frustrating having to play this game and play it well; it is like a game of chess at times and it gets you down sometimes."

Ford is now running 20kg heavier than it did at Le Mans last year, and with an amended turbo boost, while Ferrari is racing in an identical spec to 2016.

Last year at Le Mans, amendments to the BoP were made on the Friday before the race, and race organiser the Automobile Club de l'Ouest reserves the right to make changes up to and including the race itself.