Rigon and co-driver Sam Bird finished a distant third in the #71 AF Corse Ferrari 488 GTE, a lap behind the victorious Ford GT of Stefan Mucke, Olivier Pla and Billy Johnson and the second-placed Porsche 911 RSR of Michael Christensen and Kevin Estre.

It came after a late safety car bunched up the field and allowed Rigon to go on the attack against the ailing #91 Porsche of Richard Lietz, who was struggling on a set of worn tyres.

Rigon made a forceful pass on Lietz at the Bus Stop chicane in the closing stages to finally secure what he admitted was a fortuitous podium finish.

"The podium only came thanks to the safety car and a perfect strategy," Rigon said. "We can't delude ourselves.

"We chose to fit the hardest tyre because we knew our only chance would be in the second part of the race, by double-stinting. At the start it was very hard, we suffered a lot.

"We started on used tyres but we managed to stay with the group. We saved new tyres for the end, we went to catch up the Porsche and I passed.

"It wasn't easy because Lietz had better straightline speed than me. More than once I drew alongside him, I overtook him on acceleration because I had better tyres but then he recovered the position.

"I'm sorry to have used such bad manners to pass Lietz, as he's a great driver and a friend. But at that point I could not do otherwise." 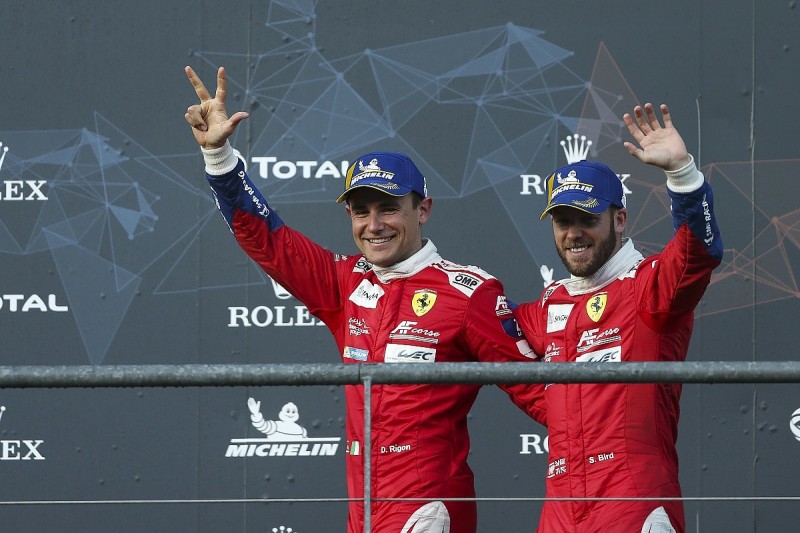 Rigon echoed his Ferrari bosses by calling for a reset of the GTE Pro Balance of Performance before the next six-hour WEC race at Silverstone in August.

"I hope that the FIA and the ACO can rebalance things because Ford and Porsche were too fast for us, BMW, which struggles in the corners, and Aston Martin," he said.

"Our race pace is great but it's not enough to aim for the victory."

The sister #51 Ferrari of James Calado and Alessandro Pier Guidi was eliminated from contention in a pitlane incident with the GTE Am class Project 1 Porsche.