Stoffel Vandoorne had handed the #28 JOTA Oreca-Gibson over to Tom Blomqvist in a leading position for the final stints, despite Blomqvist having been spun round at the start by Da Costa in the #38 sister car.

Da Costa was also at the wheel for the end, after Anthony Davidson brought the car they share with Roberto Gonzalez up from fourth to second.

Da Costa, who took his third win in a row in three different cars after also winning in Brazilian Stock Cars and Formula E, said his first ever international win on home soil felt amazing despite the lack of fans in attendance at the Algarve International Circuit.

"It's my first international win at home in cars, it feels amazing," he said.

"It's so sad that we're in this pandemic and there's no people. It would have been amazing to see the grandstands and the support today. It is what it is, but super happy with this.

"It's my third win in a row in three different cars, so I'm riding the wave, enjoying life, having a great time with these guys and the team."

On fighting Blomqvist at the end, Da Costa added he "was quicker than Tom but I knew that without traffic it would not be possible to overtake.

"He was driving really well doing, no mistakes. I was just waiting for traffic if the opportunity came up. I could see the slower GTs coming up and I decided to close the gap that lap to have a go and it happened.

"I feel for him because I've been in exactly that situation in Bahrain but I'm so happy to win at home."

He also apologised for spinning Blomqvist round at Turn 3 at the start, which dropped the #28 car he shared with Vandoorne and Sean Gelael back to last. 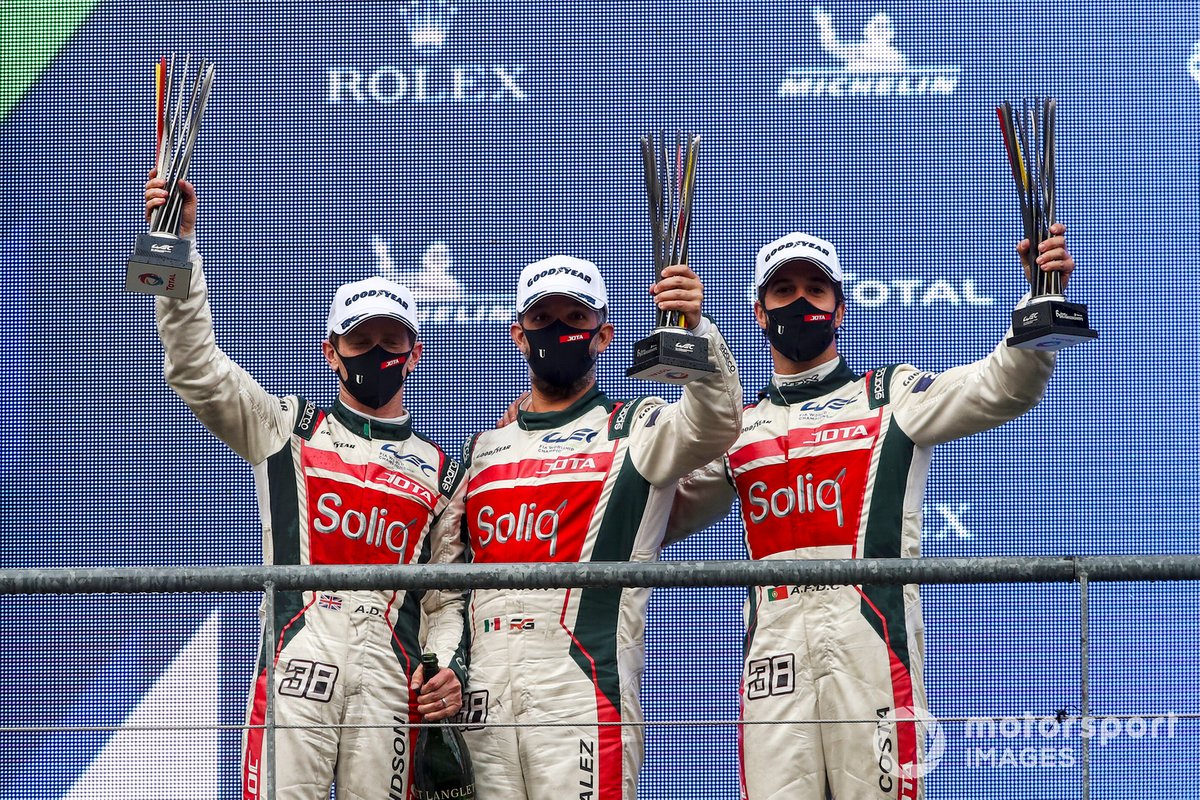 "It was just an awkward situation and when I saw that it wasn't going to work out I tried to back out but I just needed another metre to make it work. And I guess Tom didn't see me and I ended up hitting him," Da Costa said.

"I felt really bad. It was a racing incident, but you don't want to have contact with your teammate. I'm very glad that we got to have that showdown at the end to clear things out and have a nice clean fight at the end to put on a show.

"I apologise to the whole team and the #28 crew. In the end I didn't mean for that to happen obviously."

Davidson said he enjoyed watching Da Costa and Blomqvist tussle for the win at the end of the race, in sharp contrast to Toyota which didn't allow its leading hypercars to fight wheel to wheel but instead decided to switch positions to see which car was quicker.

"It's fun to watch the two JOTA cars fighting it out in the end in the way it should be fought out," Davidson said.

"No team orders, they were just trusting the professionals behind the wheel to do the thing they're best at. There was huge respect there between Antonio and Tom.

"You need that mutual respect. We have that in the team and it was fun to watch that with our hearts in our mouths.

"It's fun to see Antonio at the peak of his game right now. I just enjoy watching this guy and having him in our team."