Austin WEC: Audi and Toyota top a practice session each on Thursday

Marcel Fassler topped the times in the opening session, run in dry conditions, in the #2 Audi R18 e-tron quattro.

Anthony Davidson then claimed top spot in a delayed wet session, held under the cover of darkness, aboard the #8 Toyota TS040 HYBRID.

Mark Webber ended up third fastest in the best of the Porsche 919 Hybrids, which are running in high-downforce specification for the first time this weekend.

The Australian driver's 1m51.919s was half a second quicker than fourth-placed Alex Wurz in the leading Toyota.

Audi was on top on a drying track in the night session when the chequered flag came out, before Anthony Davidson crossed the line to post a 2m01.333s.

His time on intermediate Michelin tyres bettered Tom Kristensen's previous mark in the #1 Audi, set on wets, by more than a second and a half. 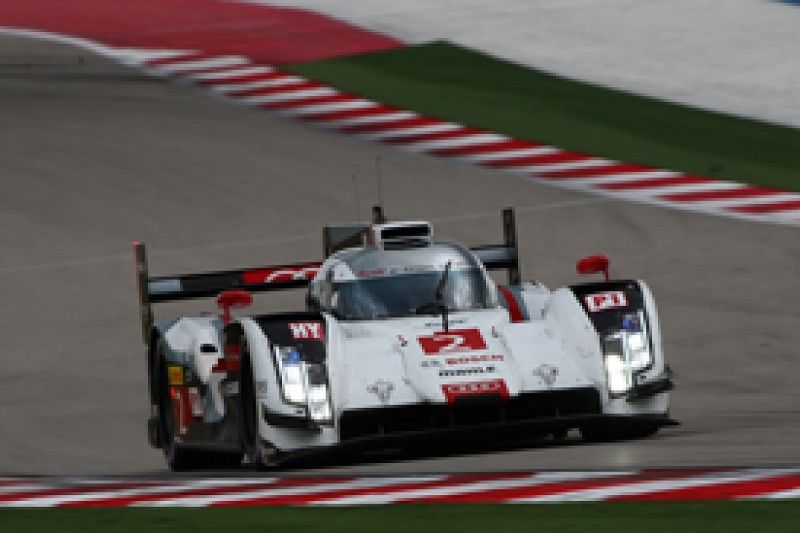 The session had been delayed by an hour by a thunderstorm, which prevented the marshals from taking up their posts under local bylaws.

The LMP2 class was led by the Extreme Speed Motorsports HPD-Honda ARX-03b in the hands of Ryan Dalziel, on a 1m58.111s set in the opening session.

That put the one-off WEC entry over a second clear of Olivier Pla in OAK Racing's G-Drive Ligier-Nissan JSP2 in the dry session.

GTE honours were taken by Darren Turner in the best of the Aston Martins, his Pro class Vantage GTE heading the two Am Astons in the hands of Richie Stanaway and Pedro Lamy respectively in the time.

Krohn gets LMP2 Ligier for 2015, eyes USC and WEC programmes