The #8 Toyota has suffered a first blow, losing a lap on the #7 sister car due to a brake change seven hours into the Le Mans 24 Hours.

The cards in the 88th edition of the race were reshuffled by two consecutive safety car periods, one for a crashed GTE Am Ferrari in Porsche Curves and one for a big accident for the #30 Duqueine Oreca of Tristan Gommedy at the first Mulsanne chicane.

With lengthy repairs needed to the barriers, Toyota used the long interruption the change the front right brakes on the #8 TS050.

The brakes had been causing overheating problems all race, prompting the team to try and clean the brake ducts of Kazuki Nakajima, Brendon Hartley and Sebastien Buemi's car during the pitstop.

That appeared not to have solved the issue, so just before the seven-hour mark Toyota decided to perform a full front right brake change.

"We will take the chance under safety car to bring the #8 into the box to properly fix the brake cooling issue," a Toyota spokesperson confirmed. 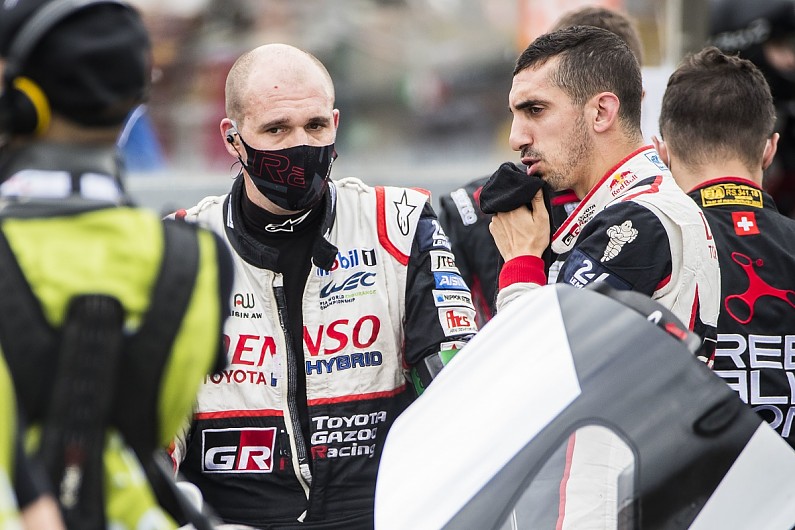 That dropped the #8 car back behind the first #1 Rebellion of Norman Nato, a full lap plus two minutes behind the leading #7 car driven by Jose Maria Lopez.

The second safety car caused more disruptions, as LMP2 frontrunner Gabriel Aubry ground to a halt in the #37 Jackie Chan DC Racing Oreca. The Frenchman slowed coming out of Arnage and finally parked his car at Porsche Curves.

Oliver Jarvis also came to a stop in the #16 G-Drive by Algarve Oreca, but managed to restart and reach the pits.

Before the second safety car, Bruno Spengler spun in the #4 ByKolles after his rear wing appeared to fall off in the Esses.

Spengler also made it back to the pits where the LMP1 privateer team, which had already lost eight laps due to an early alternator problem, is attempting to fix the damage.

Jean-Eric Vergne led the LMP2 class at the restart in the #26 G-Drive Oreca.

James Calado kept his GTE Pro lead in the #51 AF Corse Ferrari, with the #75 Iron Lynx Ferrari of Andrea Piccini controlling the GTE Am class.