Toyota remained comfortably in control of the 2020 Le Mans 24 Hours after four hours, with Kamui Kobayashi leading the race from Brendon Hartley

The two Toyotas were running out of sync to each other after Sebastien Buemi was forced to curtail his first stint in the #8 TS050 with a suspected puncture.

That meant they initially settled into an ebb and flow of trading the lead based on their stints, but partially through quicker pitstops the #7 car established a net lead.

At the four-hour mark Kamui Kobayashi, who took pole on Friday for the Japanese marque, led team-mate Brendon Hartley by 40 seconds.

Both Rebellion cars continued to lose ground at a steady rate of three to five seconds per lap. Third-placed #1 car of Gustavo Menezes was in danger of being lapped after four hours, a fate that already befell the fourth-placed #3 car of Le Mans veteran Romain Dumas.

The fifth and final LMP1 entrant, the #4 ByKolles car, spent time in the garage in the third hour with an alternator problem and returned to the track eight laps down.

In LMP2 the #39 Graff Racing ORECA gained the lead in the second hour with James Allen behind the wheel, but that car disappeared from the front due to a spin from Vincent Capillaire in the Porsche Curves after 3h30m, which prompted the Frenchman to make an extra pitstop.

In the #37 Jackie Chan DC Racing, Will Stevens made rapid progress and took over the lead of the race before handing over the car to Ho-Pin Tung. At the four-hour mark the car was running fifth, but it was the only LMP2 runner to have made seven pitstops.

Job van Uitert drove the #32 United Autosports ORECA to the front before handing over to Will Owen, who assumed the lead after four hours, courtesy of earlier stops for both Tung and the #26 G-Drive of Roman Rusinov.

Formula E champion Antonio Felix da Costa made good progress after his #38 Jota ORECA qualified in the pack and handed the car over to Roberto Gonzalez while running in the top three.

The #30 Duqueine ORECA is also in the hunt after stellar driving by Konstantin Tereschenko, passing the polesitter #22 United Autosports of Phil Hanson.

The #97 Aston Martin took control of GTE Pro in the third hour. Maxime Martin caught and passed the #71 AF Corse Ferrari of Miguel Molina for the lead in the first Mulsanne chicane around 2h20 into the race, before handing over the car to Ford refugee Harry Tincknell.

In the #51 AF Corse entry Alessandro Pier Guidi also passed Molina, who then handed the car over to Sam Bird. Bird remained in third throughout the fourth hour but cycled to the lead at various times on a different pitstop cycle. 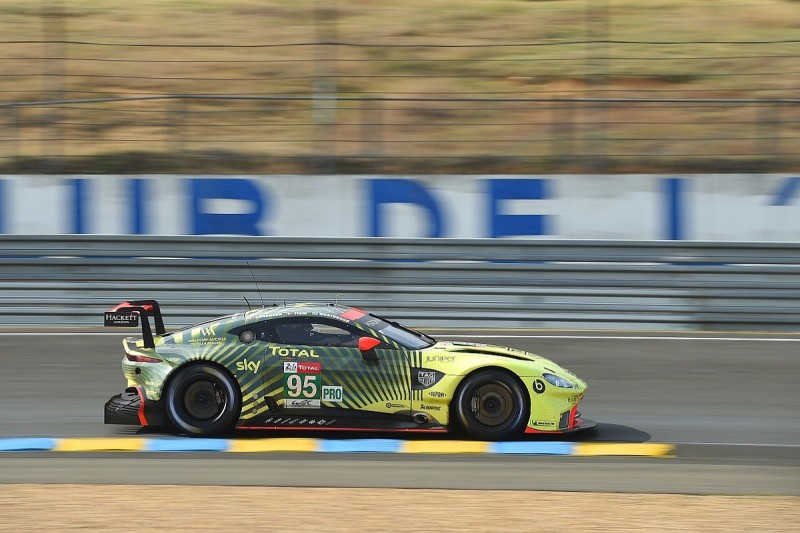 Laurens Vanthoor took the reins of the #92 Porsche 911 RSR-19, which went off-sequence after a puncture for Michael Christensen. Porsche are struggling to match Aston Martin and Ferrari for outright pace, #91 driver Fred Makowiecki languishing in seventh.

In GTE Am the #83 AF Corse Ferrari of Emmanuel Collard benefited by pitting under a Slow Zone to vault into the lead just before the four-hour mark.

Ross Gunn initially led the way throughout his stint in the #98 Aston Martin. When he handed over the car to the team's amateur driver Paul Dalla Lana, the car dropped to third as the competition was still using its pro drivers and the Canadian businessman lost time by going off in the Porsche Curves.

Augusto Farfus took over the #98 Aston before the four-hour mark to reclaim lost ground.

Salih Yoluc then assumed the lead in the #90 Aston, but was caught and passed by Larry ten Voorde in the #56 Team Project 1 Porsche before a Slow Zone promoted Collard to the lead.