Toyota driver Sebastien Buemi is predicting a race of survival in this weekend's Le Mans 24 Hours courtesy of wet conditions and a high number of event rookies.

The Swiss driver believes that getting through the traffic without incident will be the key to a race that is forecast to be affected by rain for much of its duration.

He has admitted to concerns about the amateur drivers and in particular the rookies, who have had less track time ahead of this year's rescheduled race as a result of the cancellation of the traditional pre-event track day.

"I'm going into the race thinking it is a survival race," said Buemi, who shares the #8 Toyota TS050 HYBRID with Kazuki Nakajima and Brendon Hartley.

"Contact could happen much more easily than it did in the past and I will try to go with an extra margin [when passing slower cars].

"A professional driver when he gets to Le Mans starts at a very good level, but the amateurs haven't had the test day and been able to think about it before they come back."

Buemi suggested that the problem of negotiating amateur drivers in the LMP2 and GTE Am classes will be exacerbated by the longer period of darkness in this year's double-points round of the World Endurance Championship.

"It is so difficult with the amateurs in the night: they take such a big margin, they don't know where to go, they drive in the middle [of the track], it is really dangerous.

"Sometimes they move, but most of the time they move too late and that can create an accident.

"They need to stick to their racing line as much as possible and we can drive around them." 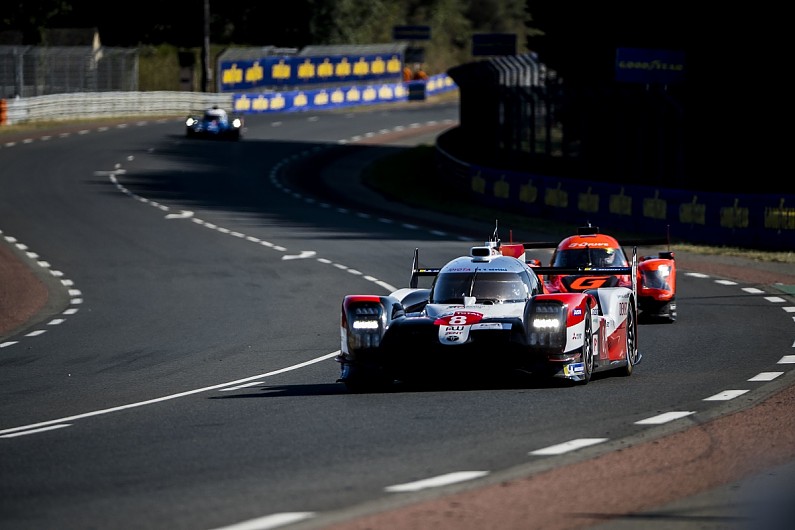 Hartley said that he hoped that the amateurs will become more accustomed to the track and the conditions as the race wears on.

"It has certainly felt that there are a few more newcomers out there this year," he said.

"We've all been new to Le Mans and it takes a while to get up to speed, but hopefully during the race they will figure it out and understand where we are going to go [when passing]."

Toyota Gazoo Racing Europe technical director Pascal Vasselon revealed that he is briefing his drivers to be extra vigilant in traffic this year.

"That has been part of our briefing with our drivers, that this year there are a lot of rookie drivers and they need to take care," he said.

There are approaching 40 Le Mans rookies on the entry for this year's race.

The pro-am classes, LMP2 and GTE Am, also make up a higher proportion of the field than in previous years.

It is possible that it will start raining as early as 7pm, most likely with thunderstorms, and the percentage chance of rain will increase through the night.

Forecasts suggest a dry period of the race just after dawn on Sunday, with a brief return of rain later in the morning.