In the latest of our series of races picked out by Autosport journalists, we look back at the 2011 Le Mans 24 Hours - which brought an end to the 'diesel wars' with one of the race's closest finishes in history

I'm fortunate enough to have attended 10 of the most recent 11 editions of the Le Mans 24 Hours, either enjoying the atmosphere as a fan in the campsite or as a journalist trying to keep abreast of all the action from the media centre. The one that I didn't manage to get to was the 2011 race, which just also happened to be one of the all-time classics.

No regrets there though, as watching at home on TV meant I could follow the drama much better than I could have hoped to in the grandstands, and watch live the race's breathtaking final showdown that culminated in the fourth-closest finish in the event's history.

The 2011 race also has the distinction of bringing to a close the 'diesel wars' era of Le Mans, five years of intense competition between Audi and Peugeot that are often overlooked in comparison to the hybrid era that followed.

PLUS: The top 10 Le Mans races of all time

My memories from my first two visits to the Circuit de la Sarthe in 2009 and '10 of watching trackside the Audi R15 (in both original and 'Plus' guises) and the original Peugeot 908 HDi FAP whizz past remain vivid, the spaceship-like hum of these machines providing a constant reminder that this generation of LMP1 machines were operating on the cutting edge of technology.

For the first time, in 2011 Audi and Peugeot had both brought all-new cars to Le Mans at the same time to coincide with the revised regulations, which were aimed at slowing down the increasingly rapid LMP1s. For the German manufacturer, this meant replacing the unloved R15 Plus, which had taken a fortuitous 2010 win as the Peugeot challenge imploded through unreliability, with the all-new R18.

It was Audi's first closed-top car since 1999, after a decade of running only open-cockpit cars, and also featured a new 3.7-litre V6 turbodiesel powerplant that was much lighter than the V10 in the back of the R15.

Peugeot's new car meanwhile, simply called the 908, looked outwardly similar to its predecessor but likewise did away with four cylinders, with the previous-generation V12 motor making way for a V8. But, as Sebastien Bourdais explains, it had a major design flaw.

"Our entire concept was meant to have a ton of front downforce," says Bourdais. "But the model was somewhat off and early on we had to run with a lot more rear wing than the design intended. So the car was very draggy and we didn't have the speed.

"We had to run two or three degrees more of rear wing than was intended by the design of the car. And when you do that, the performance on those long straights at Le Mans, it kills you."

The 2011 race also has the distinction of bringing to a close the 'diesel wars' era of Le Mans, five years of competition between Audi and Peugeot that are often overlooked against the hybrid era that followed

The second round of the 2011 Intercontinental Le Mans Cup season at Spa marked the first time the new machines went head-to-head (Audi instead gave the R15 Plus one final hurrah at Sebring), and it was Peugeot that came out on top with a decisive 1-2 finish, the new car's issues proving less of a problem on a more conventional circuit.

But the roles were reversed when it came to qualifying for the big one as Audi locked out the top two positions. Benoit Treluyer grabbed pole in the #2 car he shared with Lotterer and Marcel Fassler by just 0.061 seconds ahead of the #1 R18 driven by Romain Dumas, while the best of the Peugeots, the #9 car piloted by Simon Pagenaud, was third, 0.272s off the pace.

It was clear that on raw pace during the day, when track temperatures were at their highest, Audi had the edge over its rival manufacturer around the Circuit de la Sarthe. That was partly because of how little downforce Peugeot were forced to run to stay competitive on the straights, but also because the 908 "was a bit hit and miss" on the medium tyre favoured by Audi, according to Bourdais. When the track was cool enough to use the soft, at night-time and during some morning rain showers, Peugeot looked to have an edge.

Adding to the intrigue was that Peugeot was able to pull off 12-lap stints, one more than Audi, and that meant it could get by on 28 pitstops over the course of the 24 hours. The one R18 that was left standing at the end of the race meanwhile had to stop 31 times, but being able to eke out the tyres a bit longer meant it spent 22 seconds less in the pits than the only Peugeot to go the distance with a relatively trouble-free run, the #9 car. 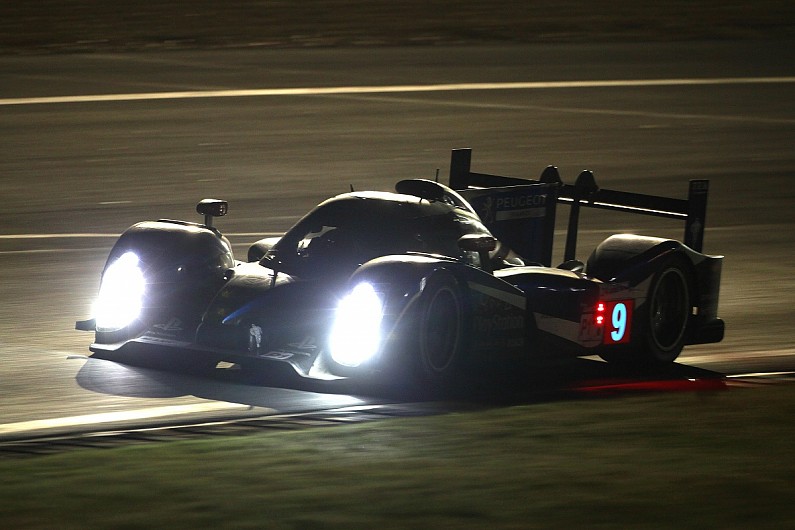 Less than a third into the race, the #2 car was on its own as both of its sister cars were written off in spectacular accidents while trying to lap slower traffic. Under an hour into the race, Allan McNish's terrifying crash in the #3 R18 at the Forest Esses deprived Audi of its de facto lead car, shared by the Scotsman, Tom Kristensen and Dindo Capello.

Then, during hour eight, Mike Rockenfeller was lucky to walk away unscathed from a massive impact with the Armco barriers in the #1 car, ruling out the 2010 race-winning crew as well.

The battle raged through the night and into the morning hours between the sole remaining Audi and the two Peugeots still in contention for the victory, the #7 and #9 cars (the #8 was delayed early on with a brake-balance adjuster issue and then lost further time to a puncture and a penalty).

At this point it seemed like the #7 machine crewed by Anthony Davidson, Marc Gene and Alexander Wurz was the stronger bet for victory, the #9 car having been reduced to just Bourdais and Pagenaud with an unwell Pedro Lamy having been stood down by team management after just one triple stint in the evening.

That was until Wurz put it in the barriers at Indianapolis with just over five hours to go, an accident which cost the #7 crew four precious laps and which made it a straight fight between the #2 Audi and the #9 Peugeot. Installed at the wheel of the Audi at this point was Treluyer, who was midway through a marathon quintuple stint of 55 laps, which Michelin claimed was the longest ever for a set of dry tyres at Le Mans.

As the race neared its conclusion, it looked like Audi, with Lotterer back at the wheel for the final three hours and 40 minutes, had done enough. But there was to be one final twist - a slow puncture that threatened to force the #2 car to make an additional stop.

Luckily for the German marque, the tyre held on just long enough for it to be changed at the same time Lotterer was due in for fuel anyway, with just 35 minutes left on the clock, although the resulting slower final stop was what set up the super-tense finale with the #9 Peugeot. 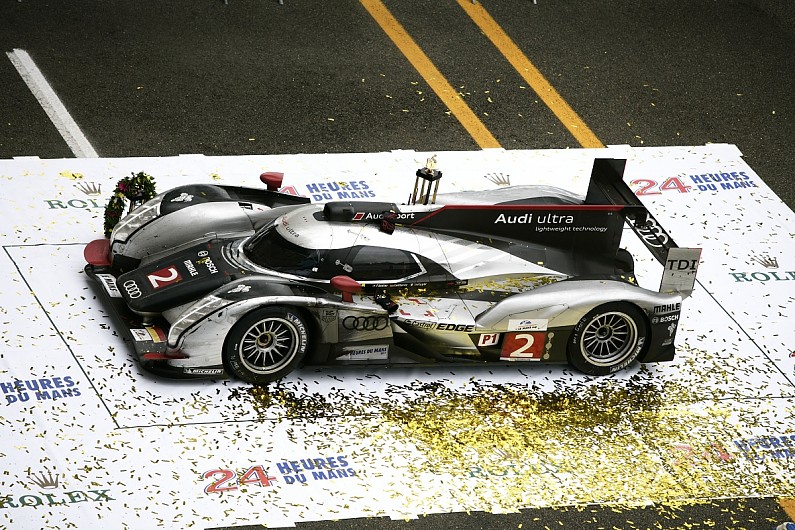 And so it was - with fresh rubber, Lotterer more than doubled his advantage over Pagenaud to seal Audi's 10th Le Mans victory and what would turn out to be the first of three triumphs for himself, Fassler and Treluyer, with just 13.854s in hand over his rival.

A slow puncture threatened to force the #2 car to make an additional stop, but luckily the tyre held on just long enough for it to be changed at the same time Lotterer was due in for fuel

"It was pretty heart-breaking to come 13 seconds short at the end," reflects Bourdais. "We did the best fight we could, it could have gone either way.

"But at Le Mans if you end up having to run less downforce than you'd like, the next thing you know, you don't switch on the tyres, you degrade them a bit more.

"That can be traced all the way back to [that design error]. We have some interesting stories from the first time the car rolled out in Le Mans configuration at Paul Ricard, everybody was pretty scared! It was a pretty wicked car originally. It was a heck of a car, but it just missed the mark at Le Mans."

Behind the five surviving diesel cars, honours in the unofficial 'petrol' class went to Rebellion Racing. In its third year in LMP1, Alexandre Pesci's squad finally emerged as a serious contender, having replaced the Judd V10 motors in the back of its pair of Lola B06/10s with a Toyota V8. While one car failed to finish after a crash for Jean-Christophe Boullion, the other, piloted by Neel Jani, Nicolas Prost and Jeroen Bleekemolen, was sixth, just a lap down on the heavily delayed Oreca Peugeot in fifth.

There was no shortage of other storylines in the LMP1 class in 2011 - the most memorable being the abject failure of the Aston Martin AMR-One project, which remains the British manufacturer's last foray into the top division of sportscar racing. Fatally undermined by an unreliable, under-developed and unconventional straight-six petrol engine and inadequate preparation time, the ill-fated machine would warrant an entire article of its own.

On top of that, there was the return of the legendary Henri Pescarolo's team to La Sarthe after a year away, World Rally Championship squad Kronos Racing entering an old Lola-Aston Martin with an all-Belgian crew including Jacky Ickx's daughter Vanina, and the first-ever hybrid-powered car at Le Mans developed by Swiss firm HyTech and entered under the banner of 'Hope Racing', a foreshadowing of what was to come in LMP1 in the years that followed.

And that's to say nothing of the fantastically varied LMP2 class or the newly rebranded GTE Pro division, in which Corvette triumphed over factory rivals Ferrari and BMW. 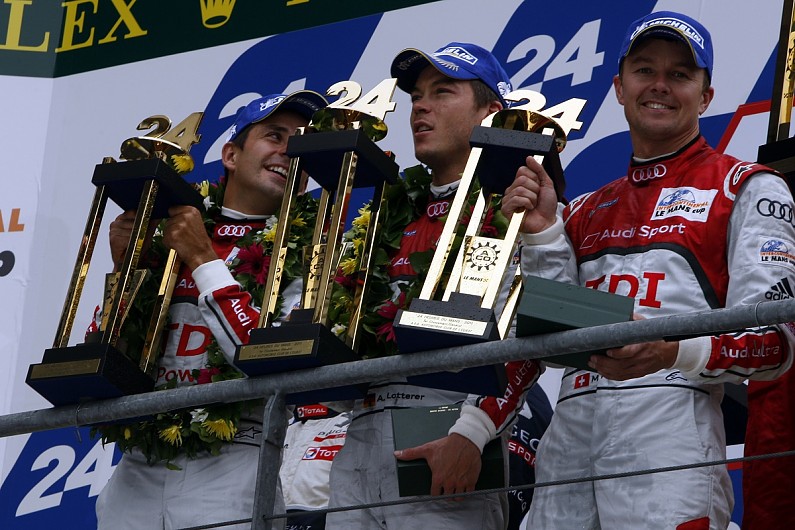