Gustavo Menezes, Bruno Senna and Norman Nato had a trouble-free run in the polesitting #1 Rebellion R-13, taking advantage of being slowed only by 0.55 seconds a lap under the system of LMP1 success handicaps introduced for the 2019/20 season.

The more lightly penalised of the two Toyota TS050 HYBRIDS, the #8 car shared by Sebastien Buemi, Kazuki Nakajima and Brendon Hartley, was powerless to challenge the Rebellion, with Buemi dropping 23s back in the opening hour.

Hartley brought the car home 51s down on the Rebellion, which scored only its second outright, on-the-road WEC win following its first triumph last year in Shanghai.

Points leaders Mike Conway, Jose Maria Lopez and Kamui Kobayashi took the final podium spot in the #7 Toyota which was slowed by 2.77s a lap, versus 2.21s for the sister #8 car. The trio were two laps down on the winning car.

It was a win that had seemed unlikely in the early stages when di Resta dropped down the order, prompting an early changeover to Hanson that put the team off-sequence.

But consistent pace from all three drivers steadily put the United ORECA back into contention, and by the time di Resta brought the car in for a splash-and-dash with 20 minutes to go the #22 car was 1m20s up on its nearest rival, the #37 Jackie Chan DC Racing ORECA.

Ex-Formula 1 driver di Resta ultimately finished 24s ahead of the car shared by Will Stevens, Ho-Pin Tung and Gabriel Aubry, which was delayed early on when Stevens was punted into a spin by the Racing Team Nederland entry of Frits van Eerd.

The Signatech Alpine ORECA lost two laps with a brake failure in the second hour, ultimately finishing sixth in class, while the one-off DragonSpeed entry dropped to ninth and last in class with a brake problem with just 10 minutes remaining. 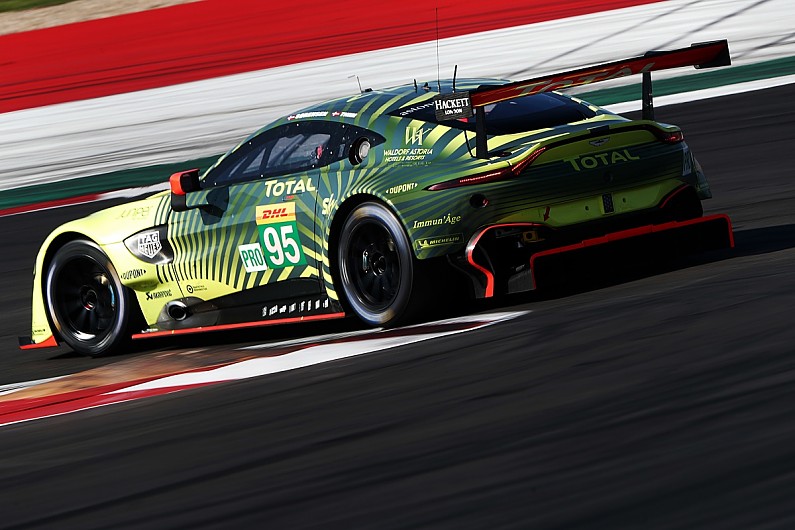 Thiim was able to establish a buffer in the opening stint, and resisted a late charge from the #92 Porsche of Michael Christensen and Kevin Estre, which finished only 4s in arrears.

Alex Lynn and Maxime Martin ran second in the #97 Vantage for much of the race, but Martin dropped behind Estre in the penultimate hour before Lynn conceded a position to the #51 Ferrari of James Calado and Alessandro Pier Guidi in the final half hour, finishing fourth.

The second Porsche 911 RSR-19 of Gianmaria Bruni and Richard Lietz was in the mix for a podium finish as well before a battery problem caused the #91 car to stop on track with just over an hour to go, dropping the pair to seventh and last in class behind the solo Corvette C8.R.

Aston Martin took a double victory in the GTE ranks as the #90 TF Sport entry of Charlie Eastwood, Salih Yoluc and Jonathan Adam scored a third Am win in four races.