The #8 Toyota crew were handed a clear path to victory when Jose Maria Lopez made a crucial slip-up in the sister #7 TS050 Hybrid in the fifth hour of the race.

Lopez made contact with the #90 TF Sport Aston Martin of Jonathan Adam at Turn 15, picking up floor damage that required a trip to the pits that cost the #7 almost two laps.

The car Lopez shares with Mike Conway and Kamui Kobayashi had been right in the hunt at half-distance, with Lopez trailing Buemi by just a few seconds at the time of his incident.

Heavy rain in the final 30 minutes prompted both Toyotas to change to wet tyres, and then again to extreme wets, as a crash for Loic Duval in the #28 TDS Racing ORECA with 12 minutes left on the clock brought out a safety car that remained on track until the finish.

Despite a late spin for Nakajima, the #8 crew hung on in the treacherous conditions to score a third win of the 2018/19 superseason by a lap over the #7.

With the 1000-mile Sebring race offering 32 points for a win instead of the usual 25, it means Alonso, Nakajima and Buemi now lead the drivers' standings by 15 points heading into the final two rounds of the campaign.

Completing the podium was the #11 SMP Racing BR Engineering BR1, which recovered from an early puncture to finish best of the rest - albeit 11 laps down on the winning Toyota.

The #3 Rebellion-Gibson R-13 looked well set for the final podium place after both SMP cars hit trouble, the #17 BR1 dropping out when Egor Orudzhev crashed in the second hour.

But late issues for the #3 dropped it behind the leading LMP2 cars, giving the #11 car shared by Vitaly Petrov, Mikhail Aleshin and ex-Formula 1 driver Brendon Hartley a spot on the podium.

The #1 Rebellion dropped out when Mathias Beche crashed while trying to lap a backmarker in the fifth hour, while the #10 DragonSpeed BR1 was ruled out with mechanical problems. 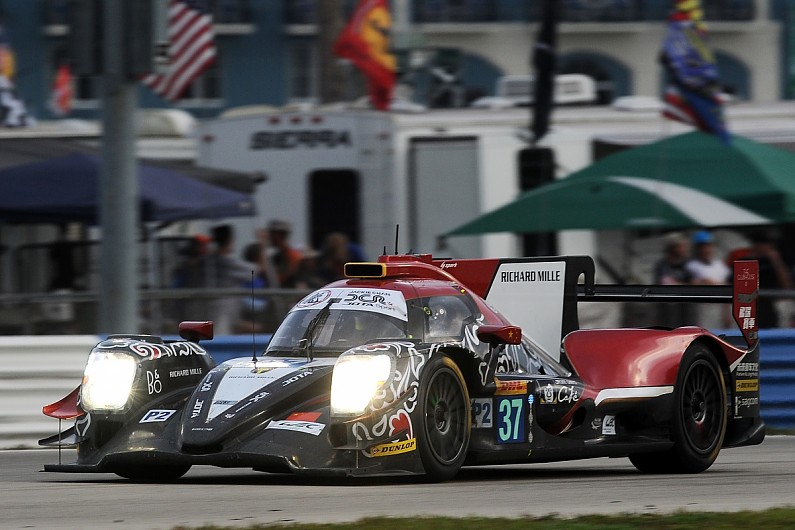 The new drivers in the #37 ORECA took control of the class early on and established a big lead over the car's only real rival, the #36 Signatech Alpine ORECA, ultimately beating Nicolas Lapierre, Pierre Thiriet and Andre Negrao by 27 seconds.

DragonSpeed drivers Anthony Davidson, Pastor Maldonado and Roberto Gonzalez recovered from an early brush with the barrier to take third in class, a lap down. 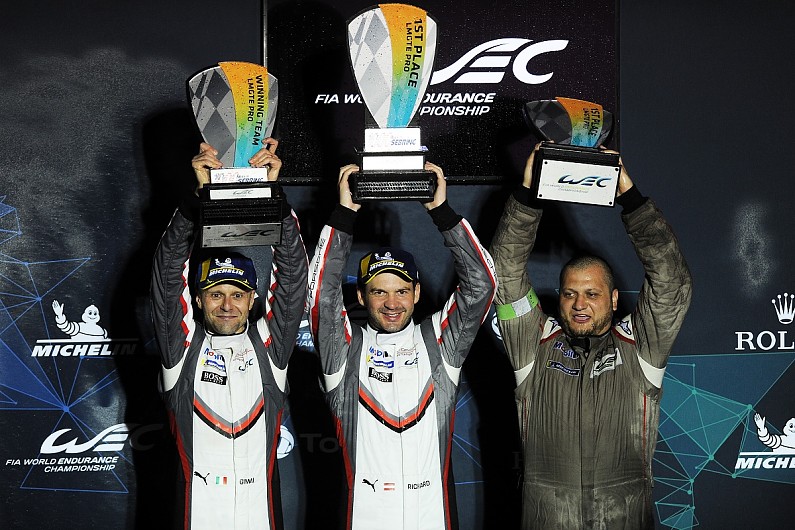 Porsche took an unlikely victory in the GTE Pro class as Gianmaria Bruni and Richard Lietz took full advantage of the late rain.

BMW had been on course for its first WEC victory after Martin Tomczyk passed the Ford of Jonathan Bomarito to snatch the advantage in hour six, and Tomczyk's team-mate Alexander Sims at one point led by more than 10 seconds.

But that advantage was lost in the pits when the rain arrived, as Porsche turned around the #91 car faster than BMW to change to wet tyres.

Tomczyk, Sims and Nicky Catsburg had to be content with second place, ahead of the #67 Ford GT of Harry Tincknell, Andy Priaulx and Bomarito, which had commanded much of the race.

Priaulx had led by more than 20 seconds before the first safety car period, but once the pack had been bunched up the Ford appeared to struggle for pace after the sun set.

The two AF Corse-run Ferraris sandwiched the #92 Porsche of championship leaders Kevin Estre and Michael Christensen, who had to serve a stop-and-go penalty when Estre made contact with the Aston Martin of Darren Turner.

Project 1 Racing, racing with a spare Porsche that was hastily shipped to Sebring following the squad's dramatic testing fire, completed the class podium in third place.