The #7 Toyota led the way in Le Mans 24 Hours practice, with a late improvement from Sebastien Buemi in the sister #8 car securing the manufacturer a session 1-2.

Jose Maria Lopez recorded a 3m19.626s lap aboard the #7 TS050 HYBRID with around an hour of the four-hour session remaining, but that effort was trumped with 10 minutes left by Kamui Kobayashi, who lowered the benchmark by another nine tenths.

His eventual best of 3m18.718s was more than two and a half seconds faster than the best time set at the test day earlier this month, which two-time Formula 1 world champion Fernando Alonso managed in the sister #8 car.

Buemi moved the #8, which had spent the majority of the session outside the top three, up to second with a 3m19.275s on his final lap.

The #8 completed more laps than any other in the LMP1 class - 55 - while the two Toyotas managed more than 100 laps combined.

Buemi's effort dislodged the #3 ORECA-built Rebellion R-13 from second, although Thomas Laurent did improve that car's time on his final lap to end the session 0.708 seconds off the pace in third.

Laurent had stopped the car on track in the final hour, but was able to recover to the pits and returned to the track to complete the session.

Ben Hanley ended up fourth for DragonSpeed and best of the BR1 cars, finishing almost a second faster than the #11 SMP Racing entry.

The #1 Rebellion of Neel Jani, Andre Lotterer and Bruno Senna ended up sixth ahead of the second SMP car, with the sole ByKolles car eighth and five seconds off the pace.

The #5 car stopped on track in the first five minutes, although did return to the track to set a fastest time of 3m25.203s, while the sister #6 car propped up the overall timesheets after completing just seven laps.

Its running was cut short as the team began to replace its engine in the final hour.

Vergne sets the pace in LMP2 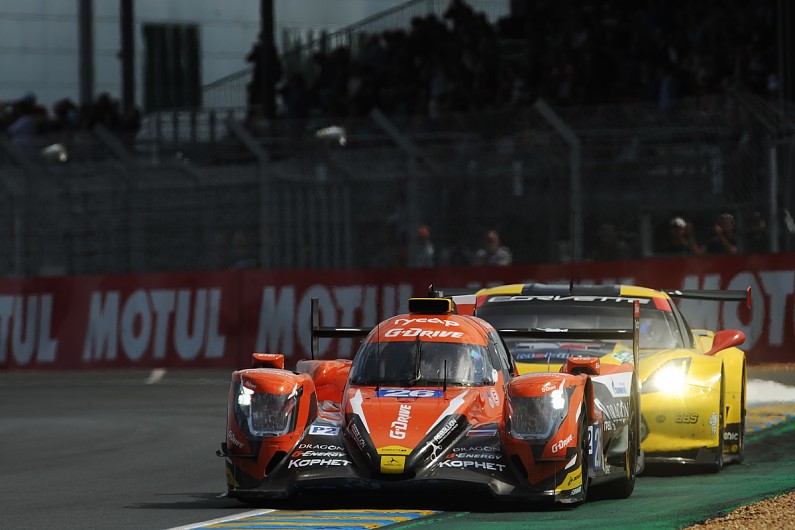 Jean-Eric Vergne underlined G-Drive Racing's status as LMP2 pre-race favourite by topping the timesheets by over half a second.

The Frenchman, sharing the #26 TDS Racing-entered ORECA 07 which Alex Lynn qualified on pole last year with Andrea Pizzitola and Romain Rusinov, was the only driver under the 3m27s bracket, clocking a 3m26.529s in the final hour of the session.

Paul-Loup Chatin's early benchmark of 3m27.054s in the #48 IDEC Sport ORECA was good enough for second in class, ahead of the second TDS Racing ORECA, the #28 example driven by 2013 event winner Loic Duval.

ORECAs filled the top five positions in class, with a late effort from Le Mans debutant Paul di Resta aboard the #22 United Autosports Ligier putting him best of the rest behind Nathanael Berthon's Dragonspeed and Tristan Gommendy's Graff-So24 entries, albeit still 1.755s off the pace.

Several LMP2 runners hit trouble in the session, including the #37 Jackie Chan DC Racing ORECA of Nabil Jeffri, who had an incident at Indianapolis and did not return to the circuit.

The #47 Cetilar Villorba Corse Dallara which set a lap good enough for eighth in the hands of Felipe Nasr early on stopped at the second chicane with a left-rear puncture, although Giorgio Sernagiotto managed to get back to the pits.

Porsche on top in GTE battle 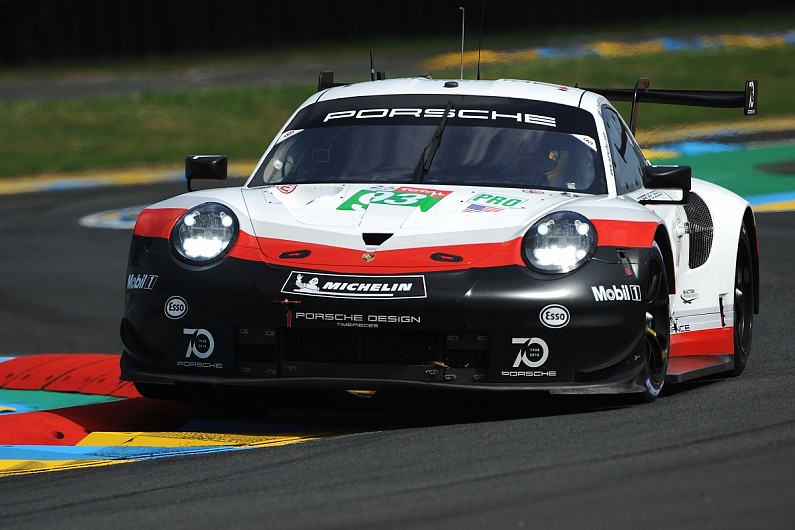 Porsche led the way in GTE Pro, locking out the top three places in class.

Laurens Vanthoor set the fastest time halfway into the session with a 3m50.859s in the 'Pink Pig'-liveried #92 Porsche 911 RSR, which remained the benchmark until the final 20 minutes - when Patrick Pilet took over at the top in the #93 car with a 3m50.121s.

It wasn't an entirely smooth session for Pilet though, as his car suffered right-front damage when he clipped the end of one of the barriers exiting the second chicane, forcing a return to the garage for repairs.

Gianmaria Bruni was third in the Rothmans-themed #91 Porsche, a further 0.003s back.

Porsche's fourth entry, the #94, was sixth fastest in the hands of Romain Dumas, followed by the second of the Ferraris and the remaining three Fords.

Corvette, BMW and Aston Martin all endured a low-key session, filling out the bottom six places in class between them.

After being handed a boost in the latest round of Balance of Performance changes, the lead Aston Martin Vantage GTE was only 15th-fastest, 3.606s off the pace, one place behind the quicker of the BMW M8 GTEs.

Ex-F1 driver Giancarlo Fisichella was the best of the non-Porsches in the #54 Spirit of Race Ferrari, a little over a tenth further back, fractionally clear of the second Dempsey-Proton car.