The #7 Toyota TS030 HYBRID shared by Nicolas Lapierre and Alex Wurz was confirmed on pole more than an hour after qualifying finished, following problems with the timing system.

The Toyota duo were nearly two seconds clear at the top of the timesheets amid the introduction of a new qualifying procedure.

The grid is based on the aggregate time of the two best laps of two drivers in each car.

The four-lap average of Lapierre and Wurz was a 1m48.021s, which compared with 1n49.995 of the sister car, driven by Davidson and Buemi during the 20-minute session.

The best Audi R18 e-tron quattro, which was driven by Loic Duval and Tom Kristensen, was a further 1.3 seconds down in third place.

Lapierre explained that Toyota had called the changeable conditions right: he started on intermediates before Wurz took over on slicks.

The Joest Audi team started both cars on intermediates, but each came into the pits for wets before completing a lap. They subsequently changed to slicks for the second half of the session.

Joest technical director Ralf Juttner said: "We started both cars on inters, but both drivers [Duval and Benoit Treluyer] said it was too wet, so we went to wets.

"In hindsight, we should have stayed on inters because the rain lessoned. After the first driver, we were already in the shit."

The best of the Rebellion Racing Lola-Toyota B12/60s ended up fourth fastest ahead of the second Audi, in which Treluyer was joined by Andre Lotterer. 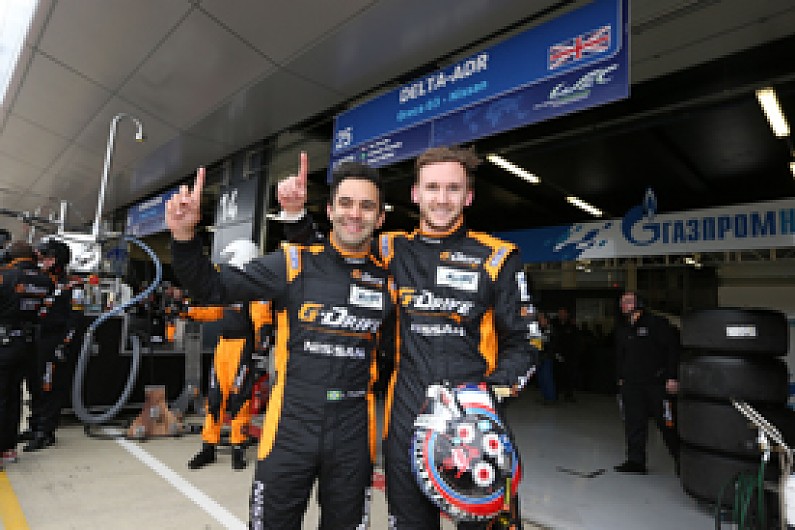 The LMP2 times were headed by the G-Drive/Delta-ADR shared by Antonio Pizzonia and James Walker, which ended up 2.5s ahead of the OAK Racing Morgan-Nissan LMP2 driven by Olivier Pla and Alex Brundle.

Walker, who is driving a prototype for the first time this weekend, said: "We went out on a cut slick, which stood up to two or three laps around here."

Aston Martin Racing dominated in the GTE rankings, filling out the top three positions on the final timesheets.

Stefan Mucke and Darren Turner ended up fastest ahead of Pedro Lamy and Bruno Senna in the second GTE Pro class Vantage GTE. Jamie Campbell-Walter and Stuart Hall were third fastest overall in GTE and quickest in the Am division.