Emma Kimilainen says her collision with Megan Gilkes in the first W Series race at Hockenheim was her "worst case scenario", making it difficult to launch a championship bid

After being left out of position as a result of a stalled start from fourth on the grid, Kimilainen was struck sideways at the entry to the turn six hairpin by Gilkes on the opening lap of the race, after Gilkes outbraked herself on a damp track and lost control of the car.

The incident ended the races of both drivers and triggered a significant safety car period, with the race eventually won by Jamie Chadwick - continuing her dominant weekend - who now leads the championship with 25 points.

The short W Series calendar means that there are just five races remaining in which Kimilainen - who was Chadwick's closest rival in both free practice sessions - can begin a championship challenge.

"It makes it frustrating, today was the worst case scenario to be honest because this was the one thing I didn't want, a DNF in a race as the calendar is so short," said Kimilainen after the race.

"My aim is now to win every single race from here so that I may have any chance of winning the championship. 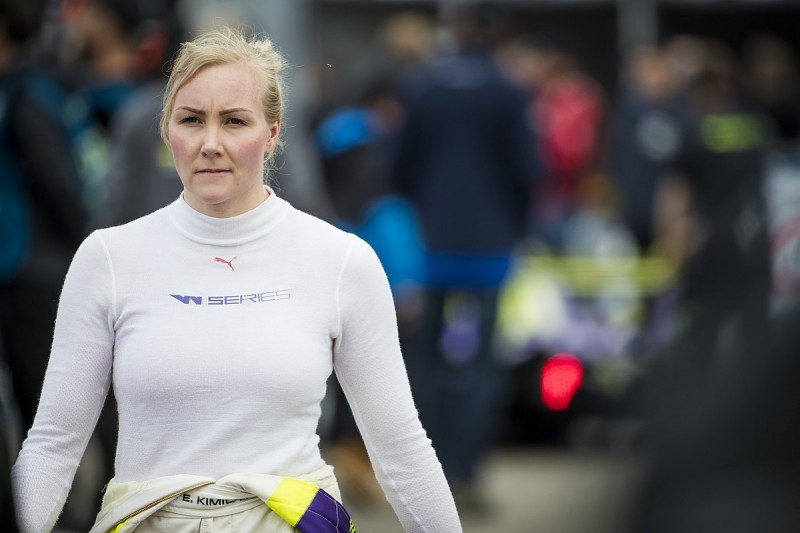 "I understand that it's hard now but it's not impossible and I won't give up in trying to do that.

"Megan made a mistake and lost control of her car - maybe it's because of a lack of experience - but I'm not mad at her.

"Once that situation had started, she couldn't do anything to prevent it and it's just one of those things."

Kimilainen had complained of some pain in her head on team radio immediately following the heavy impact, but was cleared after precautionary medical checks.

Gilkes, who at just 18 is the youngest driver on the grid, accepted full responsibility for the clash, putting it down to her lack of experience of the Formula 3-spec car in the wet conditions.

"It was completely my mistake: I was on the side of Kimilainen on the damp side of the track on cold tyres and unfortunately I outbraked myself and couldn't stop in time," explained Gilkes.

"It's a shame because not only did I end my race but also someone else's.

"I'm really frustrated with myself after that mistake but I'll learn from it and pick myself up for the next race."

Beitske Visser took her first W Series win of the season in Singapore to keep the title battle alive, as Jamie Chadwick dramatically crashed out.