Reigning MRF champion Jamie Chadwick took victory in the inaugural W Series race at Hockenheim, completing a clean sweep on a dominant weekend in which she topped every session

Chadwick started the race - held in damp but drying conditions - from the pole after impressing in a wet qualifying where she eclipsed the rest of the field by a margin of almost two seconds.

Starting on older, worn tyres, Chadwick led from the line but locked up into the hairpin while under pressure from Sarah Moore and went wide on the exit.

Moore assumed the lead, before Megan Gilkes and Emma Kimilainen - out of position after stalling on row two at the start - collided at the hairpin and brought out the safety car.

Fabienne Wohlwend - who had lined up alongside Chadwick in second - also suffered a poor start after wheelspin that dropped her back down the grid. 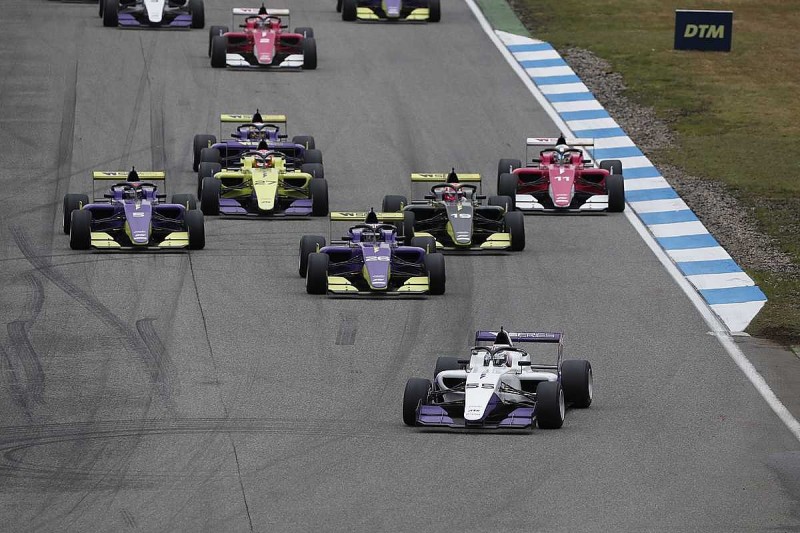 With the field regrouped under the safety car, Chadwick took the lead from Moore at the restart, with former GP3 driver Alice Powell also joining the fray and overtaking Moore for second a lap later.

Despite an almost race-long challenge from Powell, Chadwick extended a small but steady lead and took the chequered flag to complete a dominant first weekend in the series and assume lead of the championship.

Powell spent the second half of the race battling with 18-year-old Marta Garcia, who made her return to single-seater racing this weekend to complete the podium with a third place.

Beitske Visser ended the race in fourth, ahead of Moore - who had run wide at the hairpin and lost places after the restart. Despite several attempts, Moore could not make a move stick on Visser and crossed the line in fifth, defending from a recovering Wohlwend in sixth.

Miki Koyama had an impressive race to finish seventh, scything her way through the field from 17th on the grid. Behind her in eighth was Tasmin Pepper - who also starred in a strong drive from 16th.

Gosia Rdest made one place up to finish ninth, while Australian Caitlin Wood completed the top 10.