The British driver took second place in Saturday’s race at the Red Bull Ring, coming second to fellow Brit Alice Powell, and making history was the “icing on the cake for this weekend.”

Moore’s helmet for this season, which she raised money for via crowdfunding from fans, also features the LGBT rainbow.

Today Sarah Moore became the first openly LGBTQ+ driver to stand on a podium during a Grand Prix weekend. Congratulations for such a great race @smgirlracer26 #equalitydiversityinclusion #LoveIsLove ##pride pic.twitter.com/AKdDDrDBNk

Moore said in the post-race press conference: “I’ve just seen Catherine’s tweet come up on my phone and Matt Bishop messaged me to let me know the news.

“That just makes it even more special for me, it makes the helmet and my special design worth it.

"So yeah, happy Pride Month to everyone, I hope I’ve done you proud.”

She said: “I think during Pride Month, that means so much to me, especially with my helmet coming into this season – I’ve got the rainbow for the whole LGBT community, not just for myself, to support everybody.

"Being in W Series is a great opportunity to do it for the whole community and for me that just makes it extra special, the icing on the cake for this weekend.”

Moore says she has never encountered any issues around her sexuality within motorsport and says it has always been accepted, but said “from what I’ve heard, it seems to be a little bit harder for men than it is for women.

“But I think if we all stick together and we grow the community, the only way is up, and it’s only going to make it easier in the future for the community.” 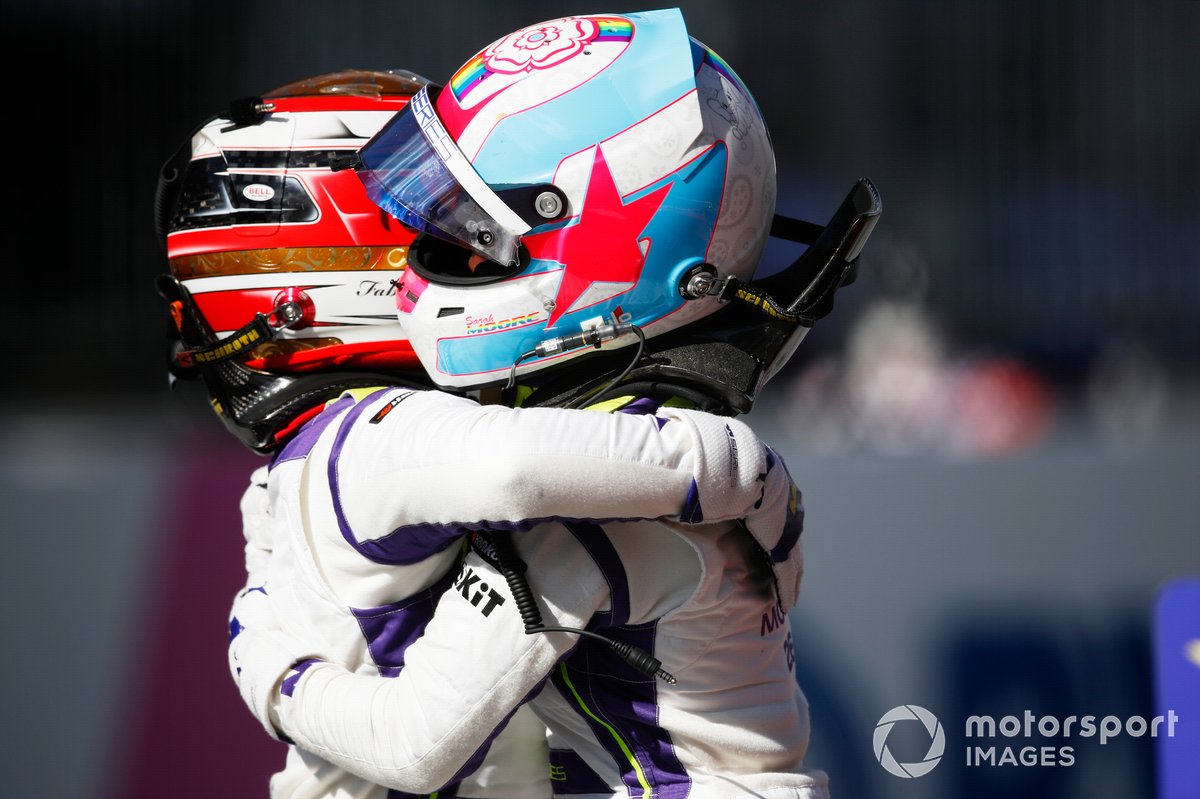 Asked whether she thinks more LGBT visibility in motorsport will increase representation, Moore said: “I think with me being part of the Formula 1 weekend, I think that just gives me the extra opportunity and obviously there are more people that we can reach out to, to support the LGBT community but also people that are not out just to make them feel a bit more comfortable and like they’ve got someone they can talk to or approach.

"I’m quite an open person and I’m always happy to help or support anybody that’s part of the LGBT community.

“[To LGBT drivers] I would say just reach out to people that are in the industry.

"I’m an ambassador for Racing Pride and I know all the other ambassadors are very approachable.

"So you know, if you want to contact Racing Pride, all of us are open to answering questions or just if you want someone to talk to, reaching out to people who are a bit higher up for support and guidance or to answer any questions that you’re unsure of.”

Moore also praised the “massive step for Racing Pride” which came after Aston Martin Formula 1 Team announced a partnership with the initiative, adopting a rainbow halo for Pride Month, which she helps will boost both awareness and understanding.