Marta Garcia took her maiden W Series win in commanding style at the Norisring, ahead of championship contenders Beitske Visser and Jamie Chadwick

Garcia got a rapid start from pole at the beginning of the race and ran the remainder of the 36 laps around the Norisring entirely untroubled, eventually leading Visser and Chadwick over the line by a margin of just over three and a half seconds.

Chadwick had lined up second on the grid but a slow getaway helped fifth-placed Visser go ahead for the position, ultimately remaining there for the remainder of the race.

The Williams Formula 1 team development driver, pictured below, did mount a challenge on Visser over the course of the final two laps, but could not make a move stick.

Visser then went on to claim a second successive second place and moved 10 points behind leader Chadwick in the championship standings.

Fabienne Wohlwend was fourth, just holding on to finish ahead of Emma Kimilainen by a little over 0.4s.

Kimilainen returned for the fourth W Series round at the Norisring after missing Zolder and Misano as a result of an injury sustained in the opening round at Hockenheim. 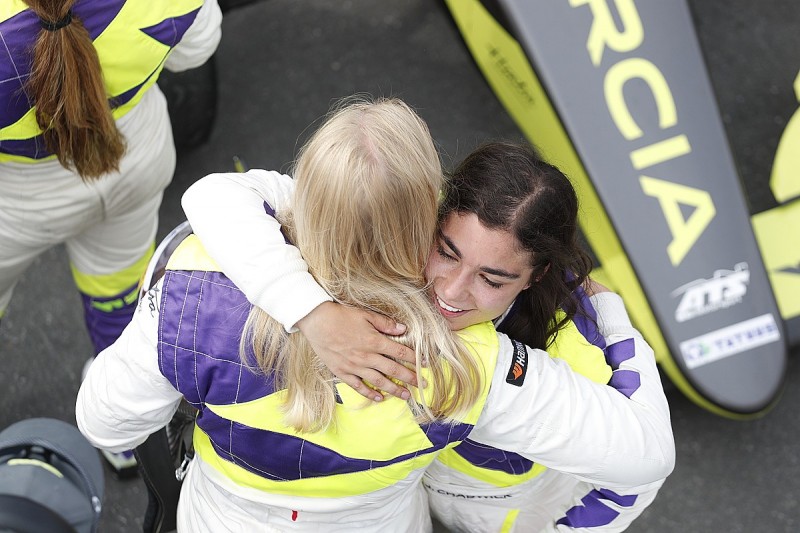 She impressed by finishing fifth after starting eighth, meaning she recorded her first points in the championship.

Miki Koyama once again enjoyed a strong race and another consistent points haul with a sixth-place finish from ninth on the grid.

She was ahead of Sabre Cook and Tasmin Pepper in seventh and eighth respectively.

Esmee Hawkey scored her best finish of the season so far with ninth place, despite losing track time in the first free practice session due to her clash with Alice Powell.

Naomi Schiff equalled her best finish in her home race by completing the top 10.

Powell's disappointing weekend went from bad to worse as she recorded a second retirement in a row.

After the Friday morning accident with Hawkey left her with an injured wrist, Powell was forced to start from the back of the grid for the race as a result of a gearbox problem in qualifying.

Powell had managed to battle through the field and was running as high as eighth at one stage, but pulled into the pits with three laps remaining and ultimately failed to finish.

Jessica Hawkins continued her strong form over the course of the Norisring weekend and had a battle for position with Kimilainen, but pulled into the pits to retire at the same time at Powell.

Friday pacesetter and fourth-place starter Gosia Rdest had a similarly disappointing race having damaged her front wing on the opening lap in the skirmish at the first hairpin, before being called into the pits to change it by race control.

A slow pitstop coupled with a drivethrough penalty for speeding in the pitlane meant she dropped back through the field and crossed the line in 14th.

Kimilainen "always" intended to return to W Series after injury