The race was twice red-flagged, with the first start halted due to a crash for JGH Racing's Rob Hodsen and Wepol Racing's Marek Cerveny on lap four. Both are thought to have escaped serious injury.

After a brief delay, the race was restarted over eight laps, with RC213V-S-mounted Rutter getting the jump on poleman Hickman off the line and leading the BMW rider across the opening tour.

Hickman grabbed the lead from Rutter early on the second lap and immediately began to open up a small buffer as he sought his fourth Macau GP success.

Kruger, Kostamo and Sheils were all taken to hospital, with only Kostamo kept in overnight for surgery on his spine - which was deemed successful - and the others released later in the day.

The race was initially suspended, with rumours circulating that it could be re-run on Sunday.

Then organisers took the decision to abandon it entirely because the Sunday schedule - which features the headline Macau GP Formula 3 race, two WTCR contests and the FIA GT World Cup - was too congested to fit in a further attempt at the Motorcycle GP.

Riders also had no more fresh tyres left in their allocation.

The initial ruling was that the race would be declared null and void because insufficient laps had been completed.

But after further discussion, organisers have instead awarded Rutter the victory by 0.298 seconds from Hickman on the basis of just one lap of racing. 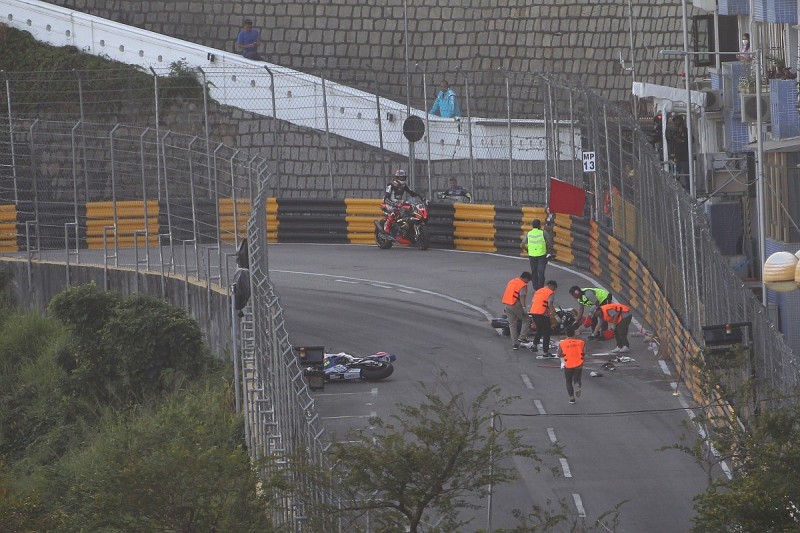 The decision was based on a clause in the rules that means the stipulation for a minimum of three laps of racing for a result to be declared is waived if a race is red-flagged and restarted.

Penz13 BMW rider Davey Todd, who ran third off the line in the second start, has been placed fourth in the results ahead of Ashcourt Racing's Lee Johnston, while the returning Ian Hutchinson (SMT BMW) was sixth.

The second PBM Ducati of Isle of Man TT legend John McGuinness was forced to sit out the second race after suffering a fuelling issue in the original start.

McGuinness in talks with PBM Ducati squad for 2020 road races