The Macau Motorcycle Grand Prix has been cancelled after two crashes caused red flags while Peter Hickman was leading.

Polesitter Hickman led away from the start on his Bathams BMW S1000RR and rapidly built a seven-second lead.

But then JGH Racing BMW rider Robert Hodson lost his bike at the Esses and collected the chasing Wepol Racing BMW of Marek Cerveny. Both riders managed to return to the pits and have no reported injuries.

After a 20 minute delay to clean up, the race resumed with Hickman's Bathams team-mate Michael Rutter (Honda RC213V) diving to the inside of Lisboa for the lead.

On the next tour, Hickman returned the favour and just fended off a cutback into San Francisco in a feisty dice.

Kruger, Kostamo and Sheils have all been taken to hospital for further assessment, but all are conscious and there are no life-threatening injuries.

It was initially rumoured that the race could be re-run on Sunday instead, but it was then announced that it would be cancelled outright and no result issued.

Organisers said the Sunday schedule - which features the Formula 3 Grand Prix, two World Touring Car Cup races and the final of the FIA GT World Cup - was too packed to fit the Motorcycle GP in as well.

Riders also have no tyres left in their allocation for what would effectively be a second race. 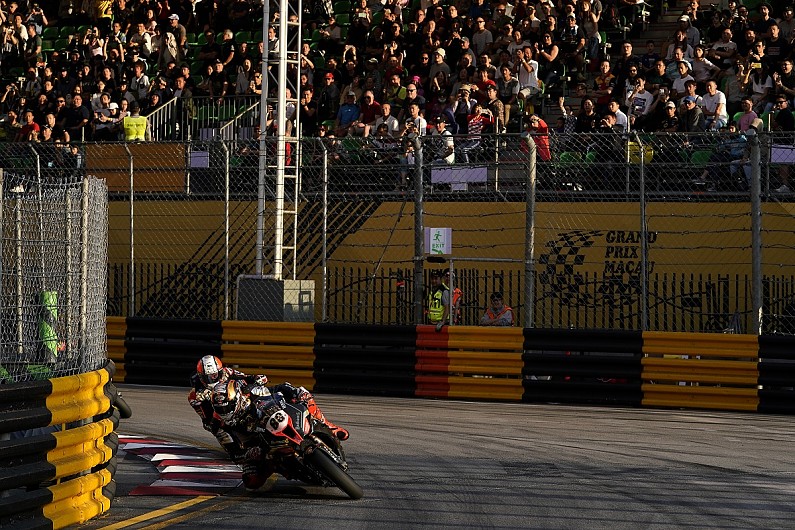 Macau rules stipulate that a GP must run for a minimum of three laps for an official result to be declared, and as that did not happen in either attempt to run the Motorcycle race it has been declared null and void.

"There is not a result," said a spokesperson. "There will be no podium."