Dean Harrison benefitted from Michael Dunlop's time penalty to win the second Isle of Man TT Supersport race, while Dunlop and Michael Rutter were victorious in Lightweight and Zero TT

Wednesday's packed schedule was opened with the second SSP race of the week, with Monday's podium men Harrison, Dunlop and Peter Hickman once again the leading riders for much of this four-lap outing.

Harrison put his Silicone Engineering Kawasaki 1.8 seconds ahead of MD Racing's Dunlop on the run to Glen Helen on lap one, which he opened up to close to four seconds at the start of the second tour.

James Hillier and Hickman ran close on the timesheets in the battle for third, with the latter getting his Trooper Triumph 0.2s in front at the end of the first lap, and was a second clear by Glen Helen.

Dunlop trailed Harrison by 8.3s at the end of lap two, but the MD Racing rider's hopes of a third win of the were dashed when he was handed a 30s penalty for speeding in the pitlane.

This gave Harrison an 18s advantage at the start of the third lap, with Hickman now second and easing away from third-placed Hillier.

Harrison's lead hovered around the 20s mark for the rest of the race and he cruised across the line to secure his first win of the week and his first TT victory in four years.

Hickman led Hillier home by 11.7s to secure second, while Conor Cummins maintained a six-second gap over Dunlop to finish fourth on his Padgetts Honda.

McAMS Yamaha rider Josh Brookes backed up his career-best TT result of fourth in Monday's first SSP race with sixth on Wednesday, while Ian Hutchinson improved from 16th on Monday to 11th in the second race.

Rutter managed a new lap record of 121.824mph in 18m34.956s, while Mugen team-mate Lee Johnston completed the podium despite having to stop on the mountain section to fix his bike's chain. 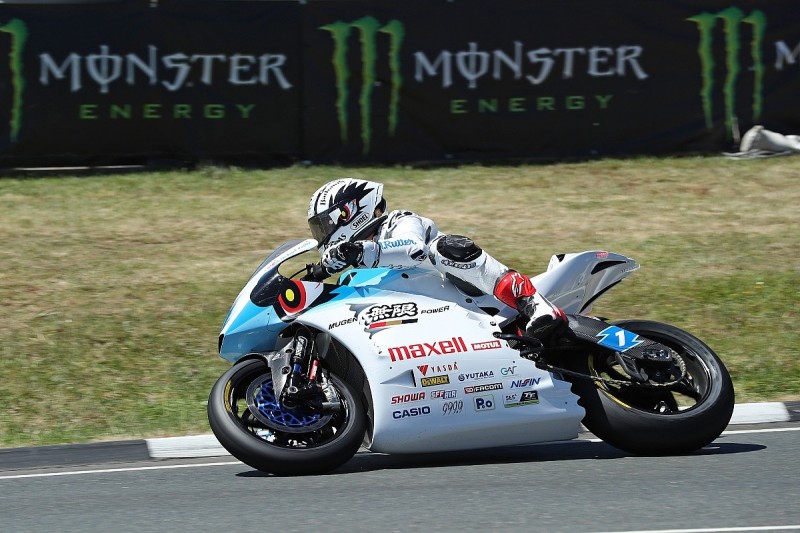 Dunlop put the disappointment of the penalty in the SSP race behind to claim his 18th TT victory in the Lightweight event, following a retirement for early leader Ivan Lintin.

Lintin led by 1.6s into Glen Helen on lap one on his Devitt Racing Kawasaki but was usurped by KMR Kawasaki's Derek McGee, who went 0.4s clear.

The Devitt Racing rider reclaimed first across the rest of the tour, putting in a new class lap record of 121.603mph in 18m36.981s, and carried on to build up an advantage of close to 10s by the final part of lap two.

However, Lintin was forced to retire at Bedstead, giving Dunlop the lead, who guided his Paton to another lap record of 122.257mph in 18m31.003s.

McGee was able to transform a four-second deficit into a 3.1s lead at Glen Helen on lap three but Dunlop dug deep and, by the start of the final tour, had put 5.4s between himself and McGee on corrected time.

13s clear as he entered the closing stages of the lap, Dunlop blasted across the line with a further lap record of 122.750mph in 18m26.543s to take his maiden Lightweight win and his third of the week.

Dunlop now sits third on the all-time winners list, with only TT legends John McGuinness on 23, and Michael's late uncle Joey Dunlop on 26 ahead of him.

McGee was almost 15s back in second, with Zero TT victor Rutter completing the podium after Hickman retired on the final lap at Union Mills.