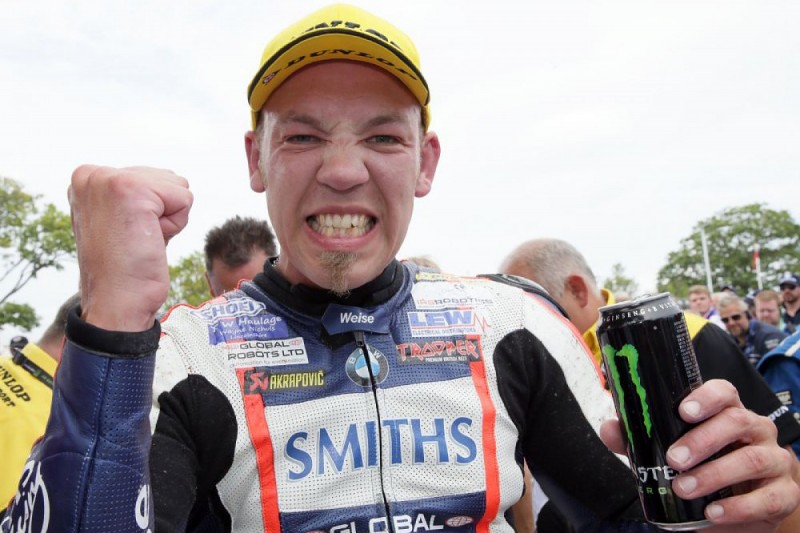 Hickman secured his second NW200 victory in crushing fashion, leading Glen Irwin by close to two seconds across the line, while there were wins for Lee Johnston and Stefano Bonetti in the first Supersport and Supertwins race of the meeting.

Irwin led Bournemouth Kawasaki team-mate James Hillier off the line in the STK race, with poleman Hickman slotting into third ahead of Bathams BMW's Michael Rutter.

Hickman utilised the slipstream on the run down to the 90-degree University left-hander to usurp Irwin, but ran wide and had to execute the move again moments later at the Magherabouy chicane.

Irwin attempted to retake the lead at the Metropole corner, but Hickman immediately countered this and soon opened his advantage at the front to over a second.

Hillier faded from the lead group, with Irwin and Dean Harrison left to battle it out for second. However, Silicone Engineering rider Harrison's race came to an early end when he tumbled off at University on the penultimate lap.

Irwin did reduce Hickman's lead from 3.1 seconds down to 1.8s on the final tour, but the world's fastest road racer could not be toppled.

MD Racing's Michael Dunlop completed the podium on his BMW, beating Hillier and Johnston in the latter stages, while NW200 debutant Richard Cooper was an impressive sixth on the Hawk Racing Suzuki.

Ian Hutchinson was involved in that scrap for the final podium place, but retired at the end of lap four. Rutter joined the Honda rider on the sidelines.

Johnston came into the STK race on a high after beating Harrison in a thrilling six-lap SSP encounter.

The Ashcourt Racing rider battled with Harrison, Hillier and Alastair Seeley for the entirety of the race, though poleman Seeley's hopes of a 25th win were dashed when he ran into the Juniper Hill chicane and crashed on the grass just after he had moved back into the lead.

This left Johnston to lead Harrison over the line by 0.730s for his fourth NW200 success, with Hillier, Dunlop, Jamie Coward and Hutchinson completing the top six.

Jamie Coward made a play for the lead on the final lap in the Supertwins race, but was bested by the Paton of Bonetti, who became the first Italian rider to win at the NW200.

Derek McGee led in the early stages on the KMR Kawasaki, with team-mate Jeremy McWilliams - who was allowed to start despite not completing the required five laps to qualify - moving ahead at Metropole.

A crash for the ex-MotoGP man at Mather's chicane on the second lap ended his hopes of a third NW200 win, with Bonetti making a break amid the chaos.

McGee's race effectively ended at the same place as his team-mate's, when he was forced to take the escape road when battling KTS man Coward.

McGee was hit with a 10-second penalty for failing to stop before carrying on, and was lucky not to crash when he clipped the kerb heading back into the paddock to retire. This promoted Rutter to third.

Irwin's KTS bike expired on the opening lap, while John McGuinness was a non-starter on his Norton Superlight.