John McGuinness says he has "chatted a lot" with Paul Bird about racing a PBM-run Ducati on the roads in 2020, after riding the bike at the Macau Grand Prix.

The 23-time Isle of Man TT winner made his full-time return to racing this season following 18 months off with a leg injury, competing at the North West 200 and TT with Norton in the Superbike and Supertwin classes, and Padgetts in Supersport.

However, Norton's effort was hampered by an enforced late change to an older 1000cc Aprilia engine when its all-new 1200cc motor was deemed illegal.

McGuinness failed to finish both SBK races and the Lightweight races at the TT on his Norton bikes, and managed a best of 15th in the SSP class on the Padgetts Honda.

He reunited with PBM for the Macau GP, but a fuelling issue meant he was unable to take the restart.

Speaking exclusively to Autosport's Tank Slappers podcast, McGuinness admitted he has talked about racing with PBM next year.

"Absolutely, there's no lying, we've chatted a lot," he said, when asked if he had discussed racing on the roads with PBM in 2020.

"Me and Birdy have a great relationship. It's a very, very different relationship I think to many riders who have ridden for him.

"They've come in as a professional and done a job for him. For me, he gave me my break in 1996 a long, long time ago.

"We've had our squabbles, [but] my first British championship, my first TT was riding for Paul.

"I was Joey [Dunlop's] team-mate in the Paul Bird team when he won three. 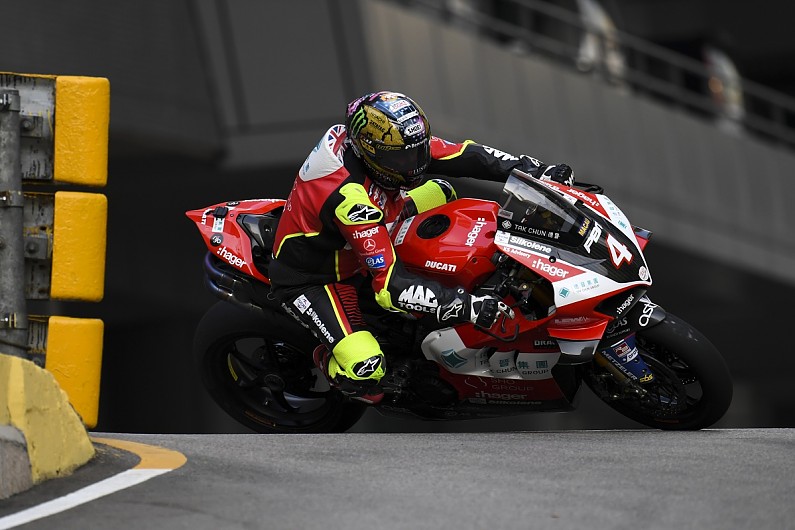 Commenting on using the Ducati V4 R onto the roads, he said: "The Ducati would be good.

"I was a little bit nervous when I got there [to Macau], but the bike preparation is beautiful.

"It doesn't want for anything, it's got new parts in it, the engine is [run to a] certain mileage and then changed.

"I just got on it and it felt right. It felt like a proper racing bike."

McGuinness said he has "to get round the table" with Norton boss Stuart Garner to discuss their next step together, but insists "things have to change" if he is to continue.

He previously told Autosport at the TT that he wanted Norton to have a proper testing programme.

"I have to respect what Stuart Garner's got and I have to get round the table with him and see what he wants to do," he added.

"If he doesn't want to go racing, then that's fine.

"I'll shake his hand and move on. If he does want to go racing, things have to change, which he knows.

"I'm going to be on the grid, I think I'm gonna have another ride."