An injured Michael Dunlop admits he has "struggled" to come back to the Isle of Man TT, almost a year on from the death of his brother William.

William Dunlop tragically lost his life just weeks after withdrawing from last year's TT in a crash during the Skerries 100, with Michael subsequently walking away from racing - only making his comeback last month at the North West 200.

Dunlop picked up a wrist injury in a crash during a test in Northern Ireland prior to the NW200, and says it has been a hindrance at the TT.

However, despite struggling for much of the week, he snatched his 19th TT victory in a thrilling two-lap Lightweight race on Thursday - something he "didn't think" would happen this year.

"I can't use my past as a challenge point, but I've struggled," Dunlop admitted when asked how difficult the events of the past year have been on him.

"We got back into this week, it's been a tough week, [I've had the] injury. I've found it hard to come back racing to be honest, I've struggled with it.

"I didn't think it would happen [winning], I thought we'd struggle again today [in the LTW race]."

Dunlop's LTW win was the 50th for the Dunlop name, though he feels he hasn't been doing the name "justice" with his performances, which he branded "a sad affair".

However, he felt he had not lost any talent during his time away from the sport, and says he is slowly "coming back" to his peak form. 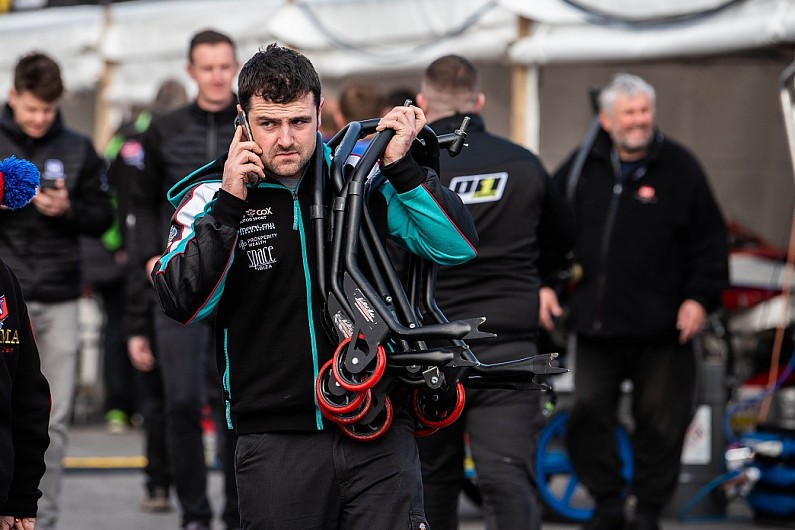 "It's been a bit tough this week, trying to carry the name and I haven't been doing it justice this week which is a sad affair," he added.

"We're always pretty good around here, it's nice to put something back up there for the name.

"I've lost something this week, but slowly but surely we've been getting it back again. I think the lack of practice hasn't helped me dramatically.

"There's nothing we can do about that, but slowly but surely we're coming back."

Dunlop admits he is finding it hard to "put a couple of laps together" on the Tyco BMW Superbike due to his wrist, but is ready to have a "push" in Friday's Senior TT finale.

"We'll have a push and see [what happens in the Senior]," stated Dunlop, who was sixth in the opening SBK race on Monday.

"I'm just struggling to put a couple of laps together on the big bike, I'm a wee bit tender.

"But we'll push and definitely have a go tomorrow. We're getting a wee bit faster now, and we'll have a push."