Scott McLaughlin took a sublime pair of wins in Perth to extend his Supercars points lead, the second of which came from 19th on the grid

His cause was helped by having team-mate Fabian Coulthard play an excellent rear gunner role during the first stint, which meant McLaughlin had the best of six seconds up his sleeve when he made his sole stop on lap 19.

From there he was able to control the gap on the high-deg surface, cruising to a comfortable 5.6s win.

Mark Winterbottom and Shane van Gisbergen completed the podium, having both run a different style of one-stopper. They opted to stop late, which meant being severely undercut by most of the field early on, but having buckets of tyre gain for a short second stint to the flag.

Winning on Sunday should have been significantly more complicated for McLaughlin, but somehow it wasn't.

The potential complication was an uncharacteristically poor showing in qualifying. It started when he missed the Top 10 in practice, which meant he had to go through Q1 for qualifying. That proved trickier than expected, McLaughlin missing the Q2 cut-off and needing to start the race from way back in 19th.

His saving grace turned out to be an early safety car. Having worked his way up to 12th at the start, a lap 4 caution and subsequent round of stops helped McLaughlin pop out in fifth, on the same strategy as the guys around him.

He then moved into the effective lead during the second round of stops, before staving off a brief challenge from David Reynolds after the third round of stops to set-up one of the most impressive wins of his Supercars career.

"I couldn't believe it," said McLaughlin. "The strategy was on point. We made it difficult for ourselves [with qualifying], but we brought it back. I joked to Dick Johnson before we went out, I said 'I reckon we could win this thing'. I didn't bloody think I was going to do it!"

Reynolds finished second, despite running off the road at the last corner on the final lap, which he post-race labelled as a "dick move". 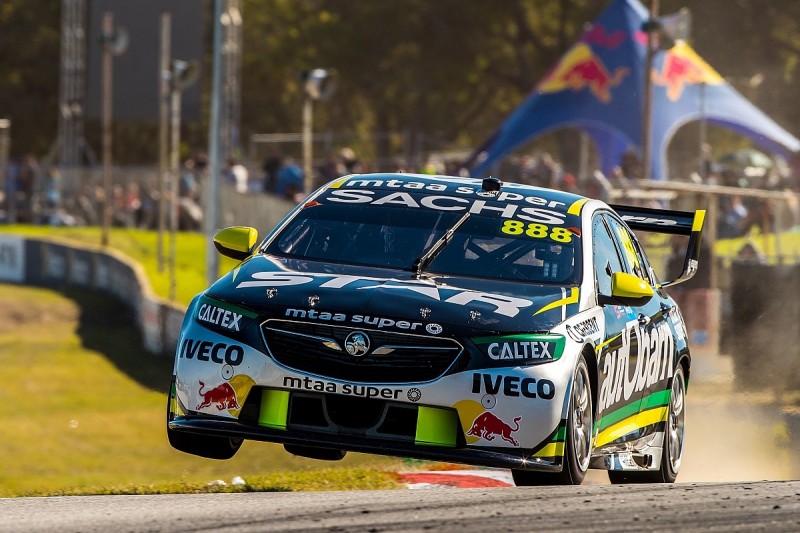 Craig Lowndes finished third, pulling off an even greater escape than McLaughlin. The veteran started way back on the last row of the grid, the frantic opening stint and an overcut-heavy three-stop strategy helping him come home on the podium.

"I said to [race engineer] John McGregor 'you call the shots, I'll drive the wheels of it'," said Lowndes. "I think we did that today.

McLaughlin now leads van Gisbergen - who finished fifth on Sunday with a four-stop strategy - by 158 points, which Reynolds a further 10 points back in third.

Jamie Whincup's title hopes took another knock over the weekend, starting with an 11th on Saturday. The reigning champion actually finished sixth on the road, but was slapped with a five-second penalty for turning Chaz Mostert around when the Tickford driver tried to get into the pits midway through the race.

On Sunday, Whincup led before the safety car, only to then slip back through the field as the race wore on. He was ultimately passed by team-mate van Gisbergen late in the race, finishing sixth.

He's currently fifth in the points with a 268-point gap to McLaughlin.