Winterbottom won his and the Ford squad's first championship last year, in his 12th full-time campaign.

It came as PRA introduced its new FG X Falcon, which proved strong on high-speed circuits but weak at lower speeds early in its life.

Winterbottom returns to the scene of its debut, Adelaide's street circuit, this weekend, having qualified no higher than 10th for any of the season opener's three races last year.

"It was good at high-speed tracks straight away and quite poor at the street circuits," he told Autosport.

"In Adelaide the car was average, it was really hard to drive and pretty ugly.

"We got outqualified by [then team-mate] David Reynolds in the [older] FG. We still need to focus on low-speed circuits.

"I knew straight away that we could win races at specific tracks, but that our bad days needed to be good."

While the team made "massive gains" and Winterbottom won both races on the Townsville street circuit in July, he says that by the end of the year, Triple Eight was back on top, showing more work is required.

"If we had have gone to Townsville with the car we had in Adelaide, we would have been nowhere," Winterbottom added.

"We made massive gains in three months, really quickly, and that's where some people went 'oh the FGX just handles itself'.

"By then we had a lot of different set-ups, and understood the car and it was quite quick. We got on top of it.

"But then we went to Homebush, and Triple Eight cars were a step ahead again.

"We still need to find more at those tracks."

Winterbottom believes a switch to significantly more races on V8 Supercars' soft-compound tyre this year could mix up results in the series, but that the key protagonists will still ultimately fight for the title.

"With a lot more soft-tyre races this year than previously, you might see some new contenders at races that last year on hards struggled," he said.

"There were guys who were quite good on softs, but struggled on hards, and HRT is probably one of them, but it'll be interesting to see who gets on top of that.

"It's going to be very tough, but you are sure the same people are going to be up the front, racing week in, week out and going through the same drama and the same stories as you always do.

"It'll be interesting to see how it all goes."

For more with new V8 Supercars champion Mark Winterbottom, see a full interview in this week's edition of Autosport magazine, in shops and online now 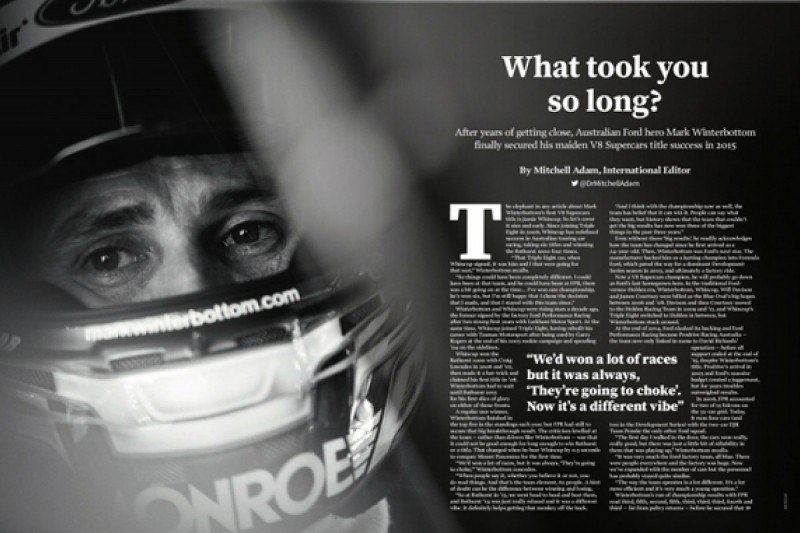