© 2020 Autosport.  All rights reserved.
Previous / McLaughlin holds off van Gisbergen to win at The Bend
Next / McLaughlin revels in silencing critics with third title

Scott McLaughlin is a three-time Supercars champion having sealed the title with a second place behind Cam Waters in the final race at The Bend.

Only needing to finish ahead of Jamie Whincup to secure the title, having won the second race of the weekend earlier in the day, McLaughlin wasted little energy trying to race Waters across the 32-lapper.

Instead his focus was on the third-placed Red Bull Holden, McLaughlin covering off Whincup's lap eight stop on lap nine to ensure his track position was never under threat.

He seemed to have his rival covered on pace anyway, McLaughlin cruising to second place, 3.3 seconds behind Waters but crucially 1.6s ahead of Whincup, to put a third-straight title beyond doubt ahead of next month's Bathurst 1000.

"It's awesome," said McLaughlin. "It feels weird not being able to celebrate with the fans.

"Now we've got the big one we can fully focus on, Bathurst. [We can] have a massive crack at it. It's been an awesome battle with Jamie thought the whole year. I'm stoked."

It's the first time since Mark Skaife in 2001 and 2002 that a driver has won the title with a round to spare two years in a row, McLaughlin having sealed the 2019 crown at Sandown last November. 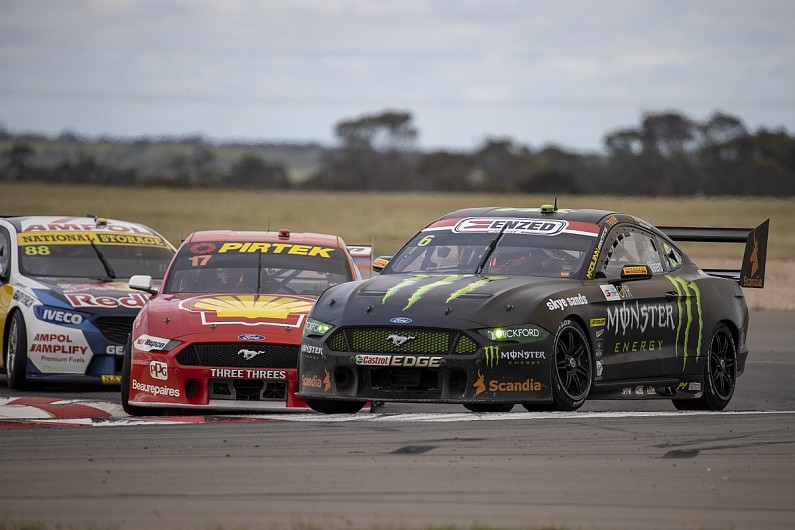 Waters, meanwhile, took advantage of the title fight to secure a first single-driver career race win. Thanks to a clean getaway from the outside of the front row he was able to muscle across on McLaughlin, knowing the points leader would yield with an eye on the bigger picture.

The plan worked a treat, Waters never looking back once in front as charged to a first win since he and Richie Stanaway won the Sandown 500 in 2017.

"The car was awesome, we made it a bit better between the two races," said Waters. "I just needed to get a good start and I was away. I'm absolutely pumped."

Nick Percat finished fourth, while Shane van Gisbergen put in a huge drive to go from 22nd on the grid to fifth. The T8 driver made good progress on a long first stint, before using his superior tyre condition to charge into the top five by the finish.