Scott McLaughlin took his third dominant win at Darwin to complete a clean sweep of Supercars' visit to the Northern Territory and further extend his championship lead.

The DJR Team Penske driver effectively won the race at the start, using the grippier side of the front row to out-drag the polesitting Red Bull Holden of Shane van Gisbergen down to the first corner.

Once in front McLaughlin never looked back, flawlessly executing a standard strategy with a lap eight stop to make it three wins from as many races, his margin in the final heat a whopping 13.8s.

Even better for McLaughlin - who reached a half-century of wins in the second race - was that his closest title rival Jamie Whincup was just seventh, the points gap between the two now 177.

"I love it [in Darwin]. I love the people, I love the track and I love it when my car is like that," he said. "All weekend it was so solid."

The battle for the minor placings was significantly closer, with as many as five cars in contention for the podium for much of the race. 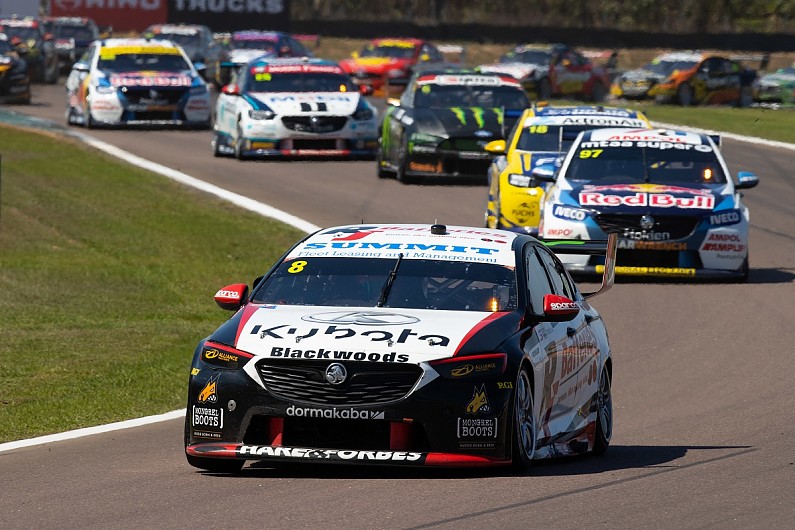 He couldn't quite shake the likes of Team 18 driver Scott Pye and, for a while, van Gisbergen, but ultimately had enough to take a well-earned runner-up spot ahead of Pye, who took his second consecutive podium after staving off heavy pressure from a late-stopping van Gisbergen on fresher tyres.

Pye didn't just help himself by holding off van Gisbergen, he also helped his team-mate Mark Winterbottom who went deep into the race before making his stop.

With the best rubber in the field for the run home, Winterbottom was able to run down Chaz Mostert and van Gisbergen to nab fourth place, escaping sanction for their contact at Turn 5 before his pass at Turn 6.

Van Gisbergen and Mostert finished fifth and sixth ahead of Whincup.