The 2017 Supercars Championship title fight went down to the final round between Jamie Whincup and Scott McLaughlin. The destination of the crown switched hands between the drivers over the two races at the new season closer in Newcastle and wasn't officially decided, in controversial circumstances, until after the chequered flag

A motor race can be measured by how many versions of the race report end up on the figurative cutting room floor.

The 2017 Supercars finale was a constant cycle of Ctrl+A and delete. A classic on-again, off-again affair as Scott McLaughlin tried desperately to avoid losing the unlosable title.

As a journalist it was frustrating. As a fan of sport it was brilliant.

The 2017 season promised to be a defining one in Penske's Supercars journey. The DJR Team Penske (DJRTP) project was heading into its third year and the team had succeeded in luring the highly-rated McLaughlin away from his happy home at Garry Rogers Motorsport.

DJRTP had also landed what was perhaps an even bigger fish - Triple Eight's technical guru Ludo Lacroix. That the signing left Roland Dane furious, the T8 boss slamming a "duplicitous" Lacroix in the aftermath, spoke volumes about its potential impact.

There were no more excuses. The 'learning-the-ropes' period was over, the driver line-up was quality and Lacroix promised to bring the X factor required to turn the team into a powerhouse. 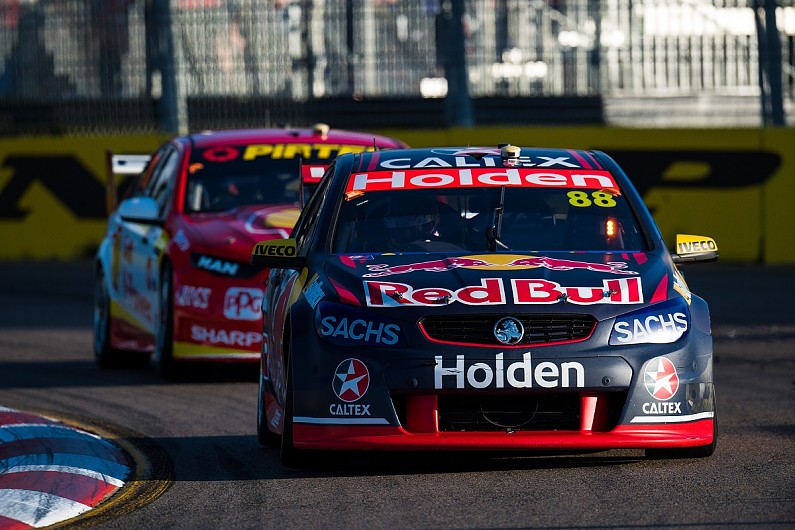 It was time to see whether or not Penske could truly take it to Triple Eight. It didn't take long for the question to be answered.

Reigning champion Shane van Gisbergen may have clean-swept the season-opener in Adelaide, but both McLaughlin and team-mate Fabian Coulthard established themselves as title contenders by racking up wins across the first half of the season.

The annual trip to Townsville in July was where the title fight really began to take shape. Coulthard had led the way to that point, but a shocker of a weekend for the Kiwi led to him tumbling down to third in the standings.

Whincup arrived in Newcastle with the slender advantage, but promptly threw it all away during Saturday's opening 250-kilometre race

McLaughlin and Whincup were neck-and-neck across the second half of the season, while Coulthard did enough to keep himself in the hunt. He even briefly led the standings again after Bathurst, before Whincup enjoyed his very first stint at the top for the entire season after the Gold Coast in late October.

When Coulthard rolled his way out of meaningful contention at the penultimate round in New Zealand, the scene for a fitting finale was set. Whincup and McLaughlin would head to the first ever Newcastle 500, to be held on a brand-new street circuit, split by just 30 points. 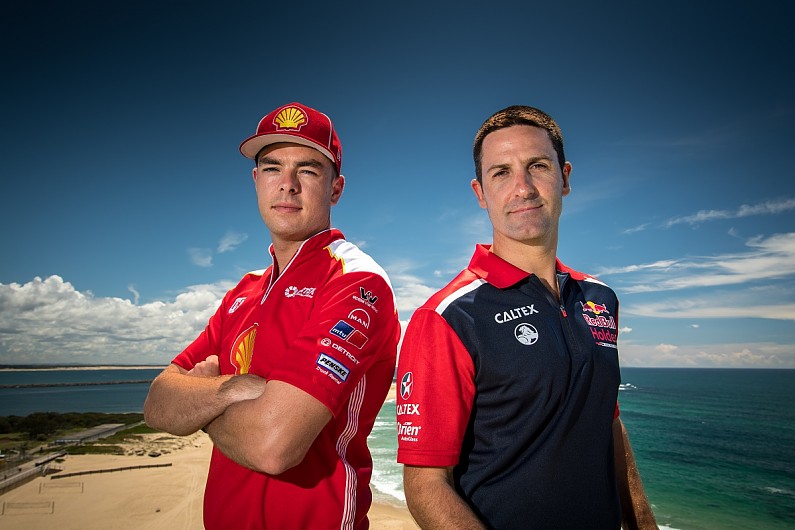 Whincup arrived in Newcastle with the slender advantage, but promptly threw it all away during Saturday's opening 250-kilometre race. A clash with Michael Caruso on the opening lap resulted in a lengthy stint in the pits. Whincup was ultimately classified 21st, 13 laps behind winner McLaughlin.

It gave the Penske Ford driver a whopping 78-point lead with just a single race, worth 150 points, to go.

All McLaughlin had to do was finish 11th on the Sunday to seal his first title. And, at least for a few short minutes, he did finish 11th. But it was Whincup that was ultimately crowned champion for a seventh time after one of the greatest title showdowns of all-time.

McLaughlin led the entire first stint of the race despite immense pressure from van Gisbergen. The first crucial twist then came as they both pitted on lap 14. McLaughlin managed to get back out in front of his fellow Kiwi, only to be slapped with a drivethrough penalty for speeding in the pitlane.

The penalty dropped McLaughlin outside the top 20, on a tight twisty Newcastle circuit not suited to recovery drives. He did manage to work his way back to 11th, the magic number, before sending Simona de Silvestro into a spin with a clumsy passing attempt.

That yielded another penalty, this one a 15-second hold at his second stop. He was left outside the top 20 again, this time with just a single stint left to get the job done.

Adding to McLaughlin's woes was that Whincup had managed to work his way into second place, which quickly became first after van Gisbergen was instructed to not put up a fight. 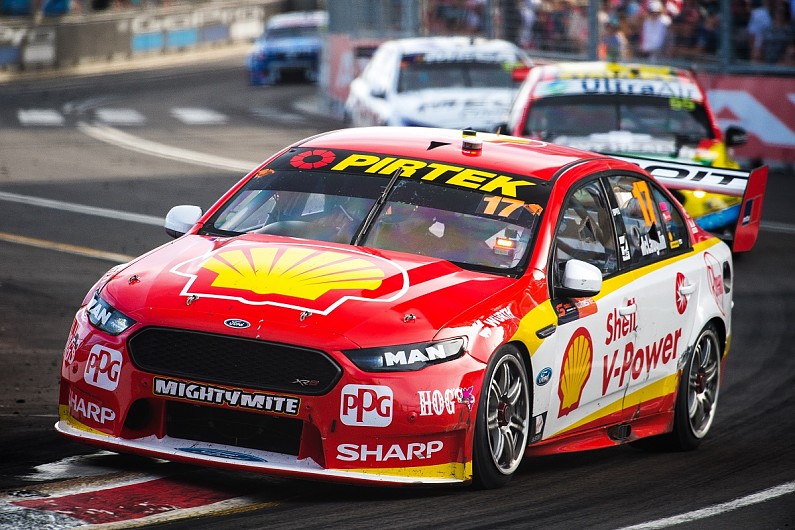 There was a remarkably close call at the restart when McLaughlin got into the back of 12th-placed Garth Tander at Turn 1. As the pack checked up, Jason Bright piled into the back of McLaughlin, the Prodrive Ford literally climbing over the Penske car's rear quarter panel.

Somehow the damage was only cosmetic and McLaughlin could carry on his charge.

McLaughlin made a desperate move left to cover his line, but left it too late, and the contact fired Lowndes into the wall

Passing both Tander and his GRM team-mate James Moffat, the final two cars standing in the way of McLaughlin and the title, was feasible enough. But there was also a wildcard in play; Craig Lowndes had taken on new rubber during the final caution, and was on a mission to run down McLaughlin.

Five laps from home McLaughlin passed Tander. Three laps later he passed Moffat. The problem was Lowndes had followed him through, the veteran sitting 12th with speed to burn and a clear brief from the T8 pitwall.

As the pair started the penultimate lap, Lowndes got a run on the uphill straight between Turns 1 and 2. McLaughlin made a desperate move left to cover his line, but left it too late. The contact fired Lowndes into the wall, McLaughlin crossing the line in 11th before immediately being hit with a post-race drivethrough that left him classified in 18th. 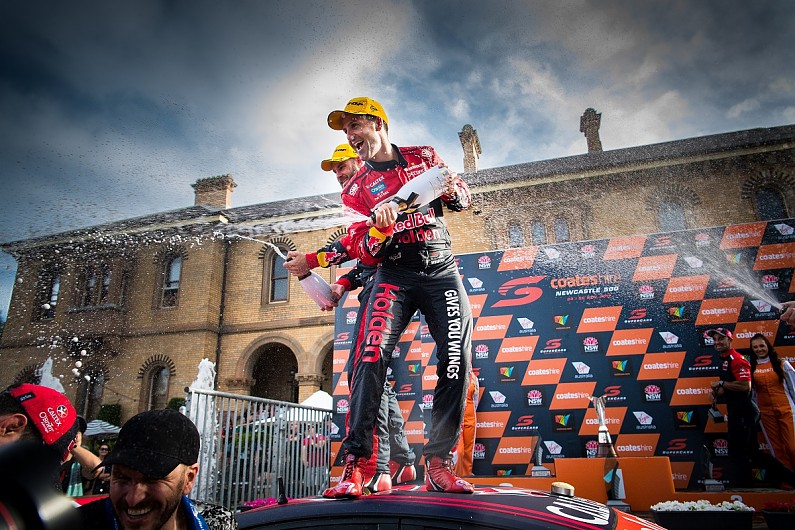 Whincup celebrated his triumph by first jumping in a fountain within the circuit precinct, and then heading to the Red Bull boat anchored in the Newcastle harbour, skulling a beer and doing a backflip into the water.

That was before he started the post-race media commitments.

But as entertaining as it was, it didn't prove to be all that healthy. Whincup spent the next few days feeling crook, the blame squarely landing on the pub-adjacent fountain that is, apparently, often used as a late-night public urinal.

DJR Team Penske, meanwhile, never formally appealed the final result of the race, but did make a public plea for Supercars to review its pitlane speed detection process. The team claimed its own data showed McLaughlin was doing 33.5km/h (20.8mph) when he released the brake and activated the limiter at the entry line and didn't exceed 38.2km/h (23.7mph) until after the exit.

Supercars agreed to meet with Penske team members, but not before making its position very clear in a media statement of its own.

"The Dorian timing system is a foolproof, point-to-point system with an accuracy to 1/10,000 of a second," it read. "As a fixed system with a time-to-distance calculation the data is 100% accurate.

"For the complete avoidance of any doubt there was no error." 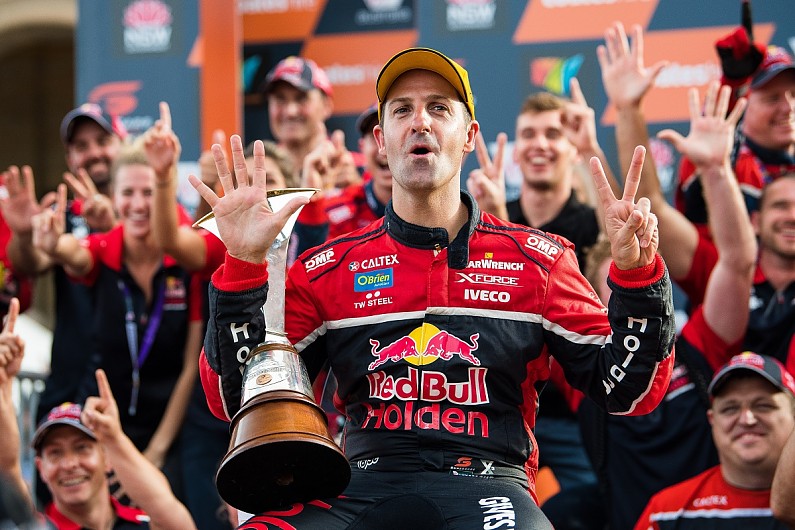 The matter was put to bed shortly before Christmas when DJRTP conceded that the Supercars system was "the best measurement method currently available".

It would also go down in history as a turning point for McLaughlin.

Working with renowned sports psychologist Emma Murray, McLaughlin emerged from the devastation of 2017 as a ruthless winner. He's since won back-to-back titles, and is at short odds to add a third when the 2020 season eventually gets going. 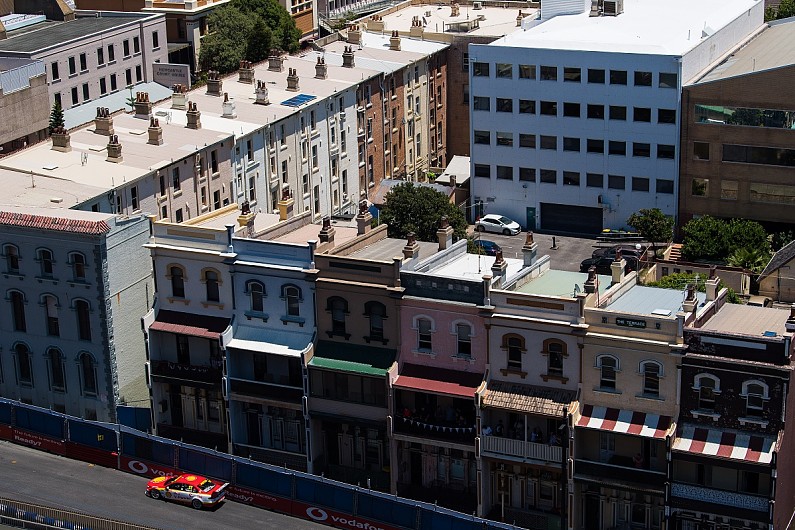