Supercars is working on a drastic plan to stage TV-only events as quickly as possible once Australia's current coronavirus-induced social distancing regulations are softened.

With its season on pause until at least June, Supercars officials are currently evaluating measures to reduce at-event staffing requirements to a bare minimum - well below 500 people.

That would mean once the peak of the coronavirus pandemic has passed and social distancing regulations are softened, racing could resume as a TV-only product.

Autosport understands that measures being considered include shortening race weekends, format changes such as binning pitstops to reduce team staffing requirements, and having elements of race control and TV production off-site.

The locations of TV-only events could be dictated by state border restrictions at the time.

Supercars CEO Sean Seamer confirmed that a plan is in the works on the latest episode of the Loud Pedal podcast.

"The big thing we're doing to get [drivers] out on track, is we're spending a lot of time to assess what our minimum viable product is," he said.

"Unlike a lot of other sports, we've got quite a lot of people to be able to execute our races.

"If you look at current team sizes, the number of guys working on each car, the TV crew, the officials, the security - just that basic fundamental group pushes us up over 500. 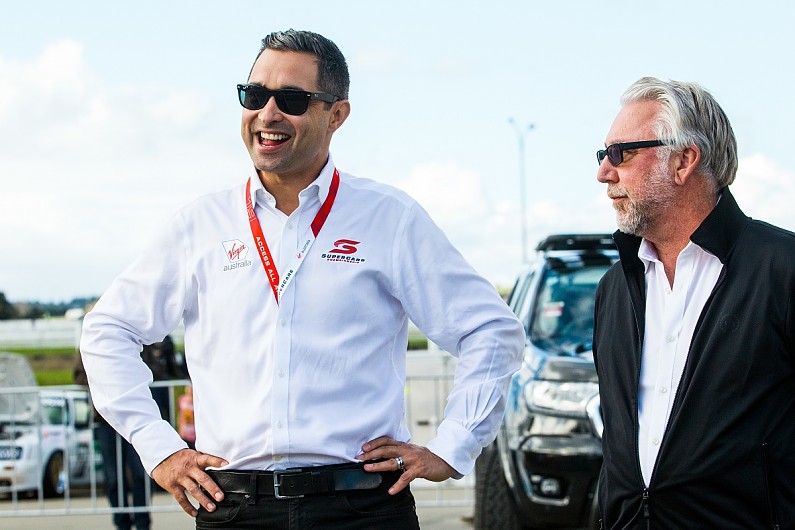 "The team is working really hard to get that number down, so even when we're dealing with a situation where only 500 people are allowed in one place at one time for an outdoor gathering, but we're able to cross borders, then we can get going with a TV-only product as soon as possible."

Supercars will help fill the current break in real-world racing with a 10-week Eseries, featuring every championship driver
using simulators set up in their own home.

The series will kick off on April 8 with races at Phillip Island and Monza.

"This series is about giving fans an opportunity to cheer for their favourite drivers from anywhere in the world," said Supercars' General Manager of Television and Content Nathan Prendergast.

"Drivers have really embraced the opportunity to continue racing via this All Star Series and we expect tough and exciting competition across the board.

"To bring fans more insights, we will have drivers chatting mid-race and interacting with the broadcast, like the Supercars Championship.

"We'll be using webcams throughout the series, so fans watching at home can see their drivers mid-race.

"Our broadcast partners have embraced this competition and we're thrilled they will be showcasing it live across their channels."