Four-time IndyCar champion Dario Franchitti believes more needs to be done to help young Scottish drivers progress in motorsport, after backing the launch of a new scheme earlier this week

The triple Indianapolis 500 winner is an ambassador for the Ecurie Ecosse Young Driver Initiative, which will fund the graduation of Scottish Formula Ford 1600 champion Ciaran Haggerty to BRDC Formula 4 this season.

Franchitti was already mentoring Haggerty and purchased the Ray GR14 in which the 18-year-old won the Scottish title last season.

He said he wants the programme to make a genuine difference and cited the opportunities he, Allan McNish and David Coulthard were given as youngsters that most Scottish drivers miss out on.

"I hope it's significant, because Allan, DC and myself were very lucky," he said.

"We had Father David and David Jr [Leslie] helping us.

"And then of course we had Paul Stewart Racing, and Jackie and Paul, and all the brilliant people they surrounded us with.

"We were so lucky. That went away, so watching Marino [Franchitti, Dario's younger brother] come up through, he didn't have any of those advantages.

"He had to fight really hard for everything. Then watching Paul [Di Resta] come up through it was the same story.

"Hopefully this could help young drivers with funding as well as advice. There's lots of people helping out.

"That to me is the coolest thing of any of it, to see everyone band together and support drivers coming up." 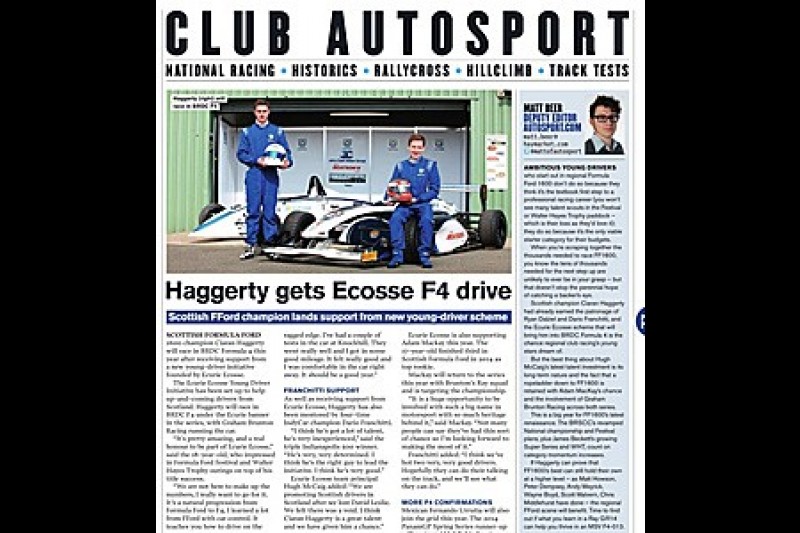 McCaig, who was behind the revival of the Ecurie Ecosse operation in the 1980s, said it "filled a void" in the support of young Scottish drivers.

"I am a great believer in stepping stones," he added.

"As long as you don't step on a slippery stone you will get across the river.

"I think Ciaran Haggerty is a great talent. We have given him a chance. He is too quiet and doesn't promote himself.

"We are trying to make him become successful in motorsport, along with fitness and media training."

More information on the launch of the Ecurie Ecosse programme features in the national section of this week's AUTOSPORT magazine, available now