Generally well-subscribed Classic Sports Car Club and MotorSport Vision Racing meetings featured on the second weekend since national motorsport in England resumed, and there was no shortage of twists and turns in Swinging Sixties at Oulton Park

A charging drive earned Steve Simpson the season-opening Tin Tops victory in the Peugeot 206 RC he shared with father Colin for the Classic Sports Car Club event at Oulton Park.

The pair qualified second but were promoted to pole by gearbox failure on the Honda Integra of Nigel Ainge and Danny Cassar. Simpson Sr was 10th after the first lap of the restarted race (due to a collision between Lee Webster and Paul Boulton) following a poor getaway and then rear-ending Nigel Tongue’s Peugeot 306 as he tried to make up ground.

But Simpson Jr took over in a net fourth and set a searing pace, overhauling the Peugeot 106 of Martin Addison exiting Cascades and Tom Mensley’s Clio (set to retire with a blown valve) into Britten’s to finish second on the road. That became first when Andrew Windmill’s rapid Honda Civic was penalised for a pitstop 0.5 seconds too short, dropping him to third. Addison, in second, had narrowly made the grid after hub failure in qualifying, before a dragging clutch at the start forced his own fine recovery.

Dave Griffin’s BMW E36 M3 led the Future/Modern Classics race throughout, as battles raged behind. The initial scrap for second between Alex Taylor (Mazda RX-7) and Stephen Scott-Dunwoodie (Ford Sierra Sapphire Cosworth) ended when Scott-Dunwoodie was surprised by Taylor’s defence and ploughed into him at Druids, bringing out the safety car. It failed to pick up Griffin, who extended his 13s lead before pitting, while Stuart Daburn caught out fellow TVR Tuscan pair Christian Douglas and Matt Holben by darting late into the pits. That allowed Daburn an easy run to second, while Douglas eventually snatched third from Paul Dolan’s BMW E30 on the final lap. 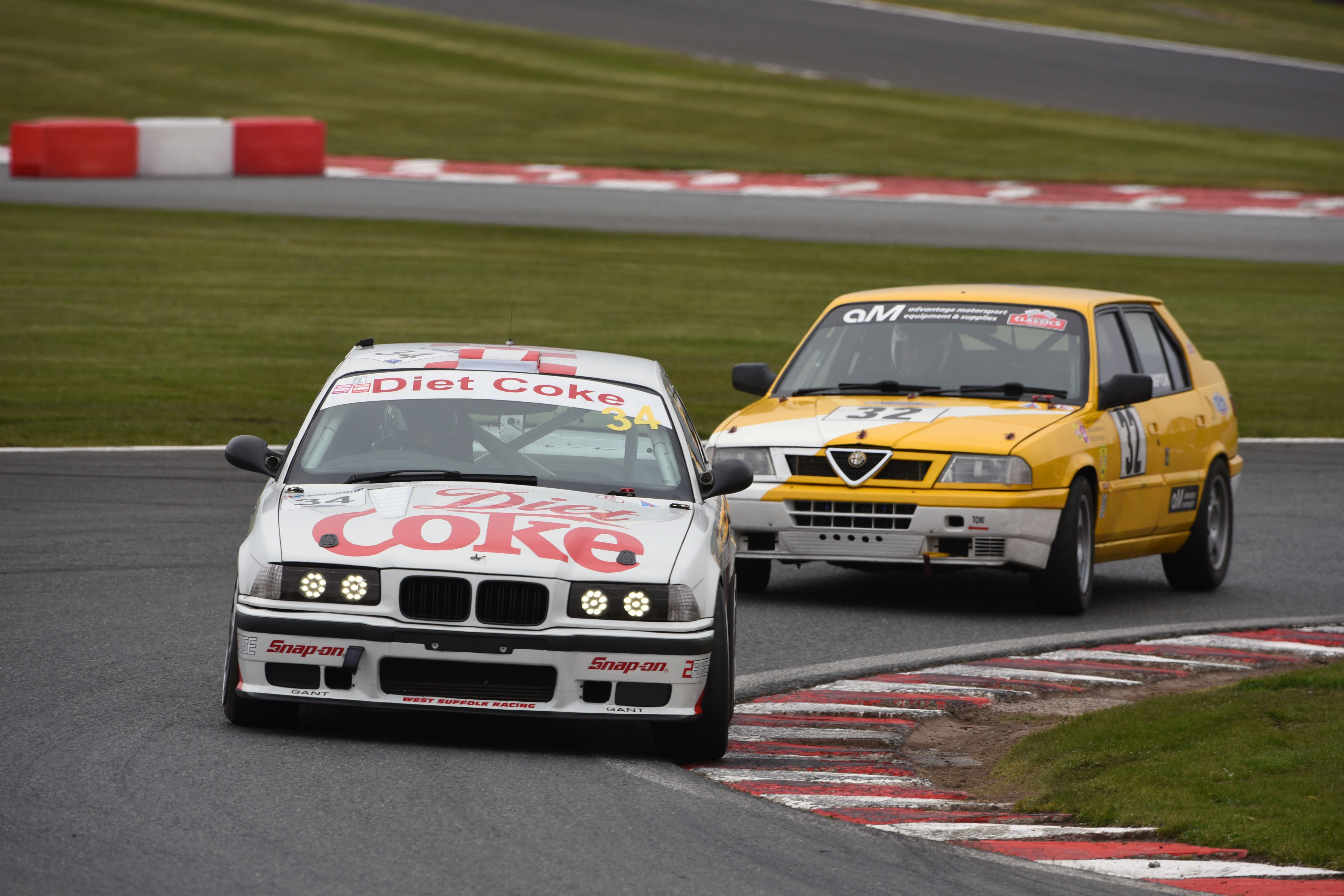 Dave Griffin starred in his BMW in Modern Classics

Classic Mini expert Nick Swift starred in his full historic-spec car in the very wet opening stages of the smaller-car set of Swinging Sixties, charging in typically spectacular style from 14th on the grid (he was twice penalised for track-limits infringements) to lead in just over two laps. Novice partner Giles Page then held on to a creditable fifth, as his sons Jonathan and Matthew staved off Ian Staines’s MG Midget for third in their Mini. With wider tyres on his Mini, Chris Watkinson eased to victory from familiar Mini men Dan and Charlie Budd, making their historic debuts.

Among the quicker cars in Group 2, regular pacesetter Jamie Keevill’s Lotus Elan was sidelined by a loose manifold, helping Mark Campbell to qualify his Triumph TR5 on pole by nearly 4s. Campbell was initially behind Malcolm Johnson’s Lotus Europa in the wet race, but dived ahead at Cascades and pulled clear to win as track conditions improved. Mark Parsley spun from third on the final lap of the curfew-shortened race in the TR4 started by Jon Ellison, handing Iain Daniels’s Reliant Sabre Six the position. 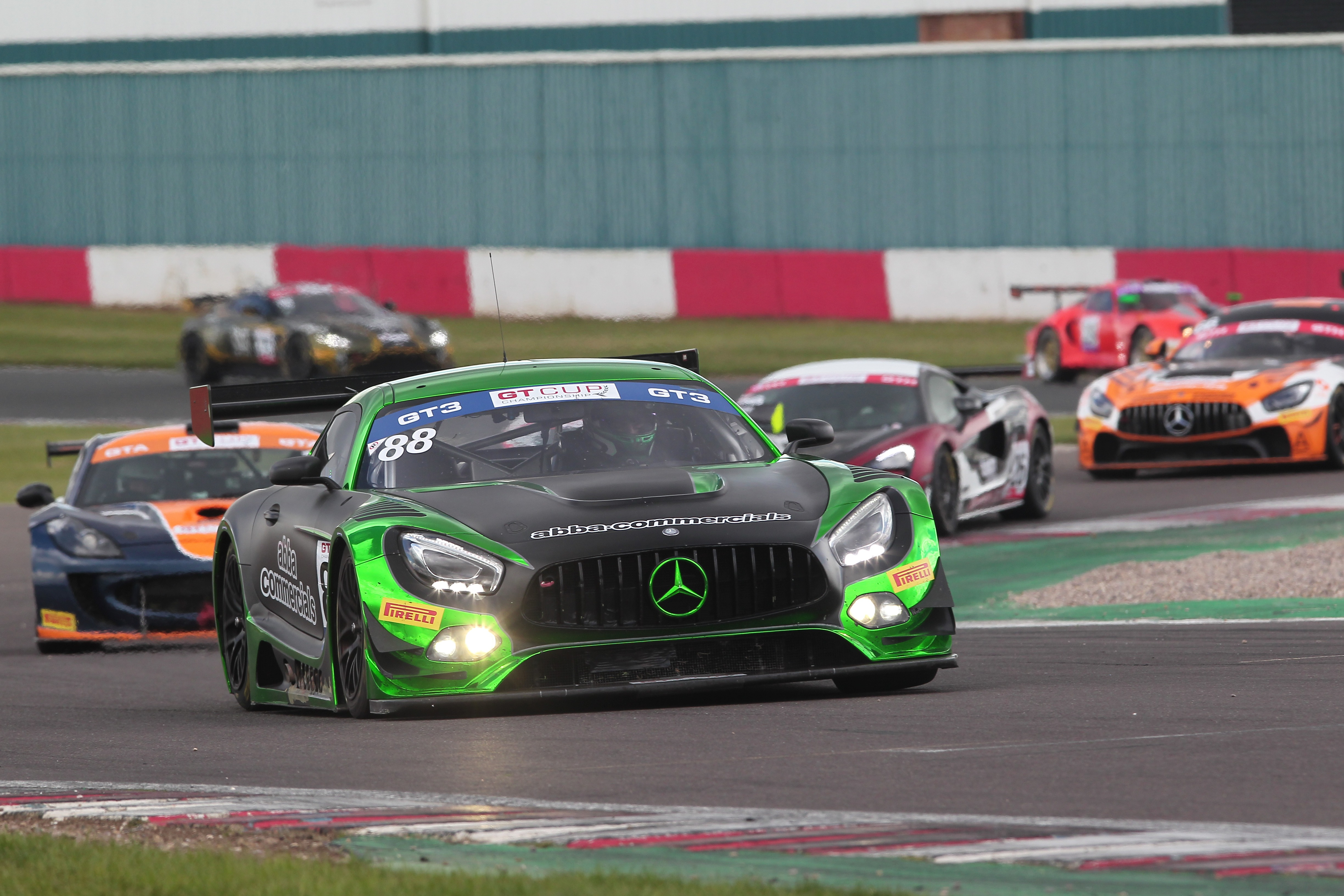 The Team Abba Racing Mercedes-AMG GT3 of Richard and Sam Neary proved almost unbeatable in the opening round of the GT Cup at Donington Park.

Father Richard got the crew’s weekend off to the perfect start as he was a lights-to-flag winner in the first sprint race. It was Richard Chamberlain’s Porsche 935 that led the initial chase, until Michael Igoe (Lamborghini Huracan) charged ahead on lap seven of 20. Grahame Tilley’s GT3 Nissan completed the podium.

The first enduro was soon under the safety car after Chamberlain spun at Redgate on the opening tour. Neary had the lead, but couldn’t hold off Igoe, who dived ahead into the Craner Curves on lap six, with Lucky Khera’s Lamborghini third.

They held station until the stops, before Phil Keen, in for Igoe, comfortably took the spoils. Fellow British GT entrant Lewis Proctor climbed his McLaren 720S GT3 – started by dad Stewart – to second, well clear of the nose-to-tail duel between Abbie Eaton in John Seale’s Lamborghini and Will Tregurtha in the Tilley Nissan. 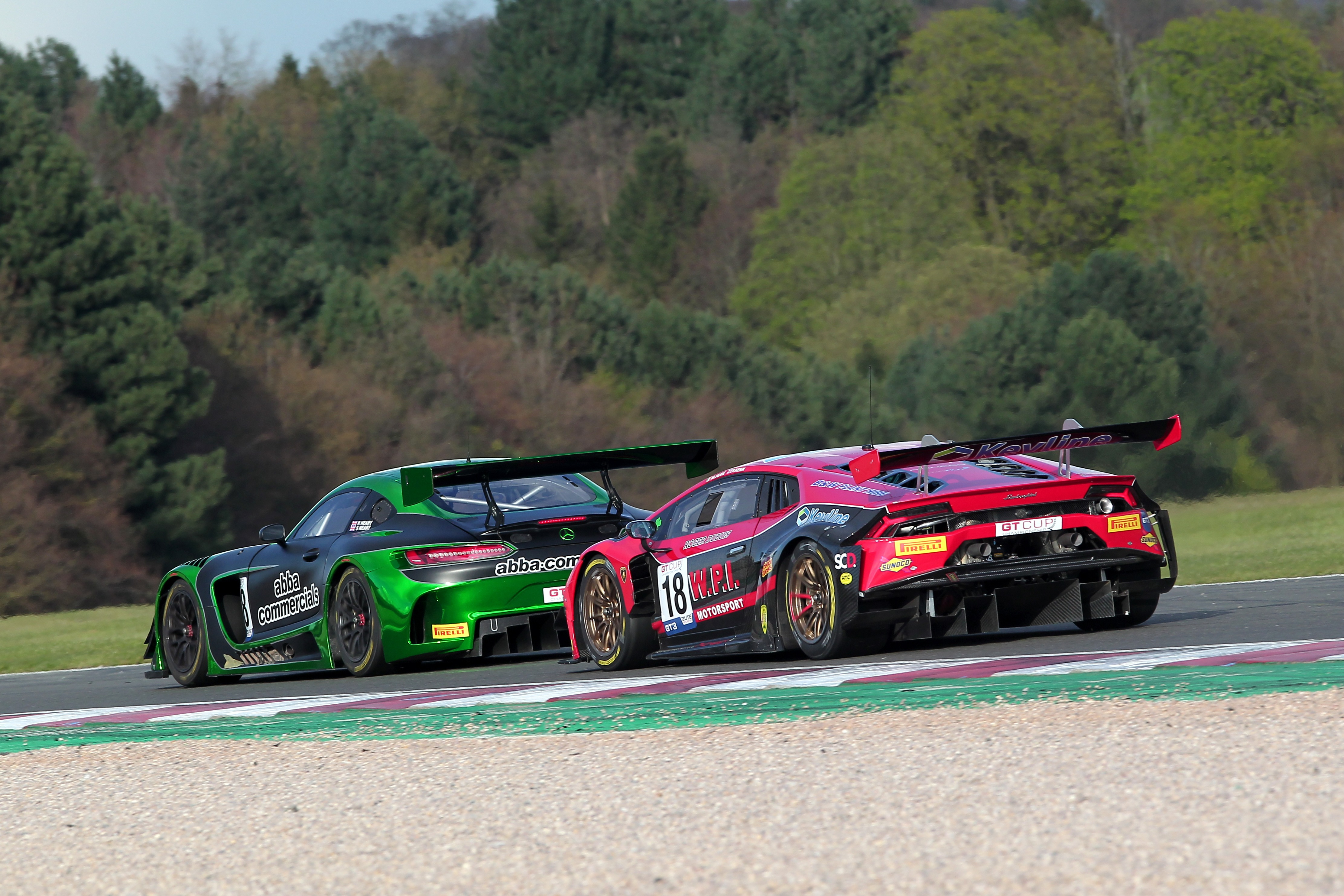 It was a comfortable win for Sam Neary in the second sprint, as Khera and Tilley disputed second after Igoe pitted at quarter-distance. Khera consolidated second, while third-placed Tilley had Chamberlain and Seale closing in until the Porsche and Lambo clashed.

The Neary-versus-Igoe battle was rekindled in the second enduro, with Tilley fending off John Dhillon’s Lamborghini for third. Igoe grabbed the lead from Neary Sr into the chicane just before the pitstop window, but after the stops it was Neary Jr all the way, with Keen second and Tregurtha reclaiming third from Phil Quaife in the Dhillon Huracan.

While Mark McAleer’s 997 proved unbeatable in the Porsche Club contests, it was far from settled behind. Peter Morris duelled with Chris Dyer for most of race one, joined in part by Simon Clark. Once Morris got away, he drastically reduced McAleer’s winning margin to below half a second, with Dyer just holding third. Dyer was a comfortable second in race two, with Morris losing third to Clark late on.

Tom Stoten was another double winner, taking two Sports 2000 victories in his Gunn. Neil Burroughs led the first race before slipping to fourth, while Michael Gibbins’s off from second on lap 10 of 19 allowed Dominic Lesniewski’s MCR to seal the runner-up spot. Burroughs reclaimed third at the chicane on the last lap from Paul Trayhurn (Gunn). Stoten took charge of race two on the opening lap, with Burroughs seeing off Trayhurn for second from lap five to complete a Gunn podium lockout.

Clive Wood snatched a last-lap win from Steve Dickens at Redgate in the first of the Clubmans races, with Peter Richings third. Despite Wood’s efforts, Dickens held on to his race-long lead in race two, with Wood only 0.265 seconds down at the flag. 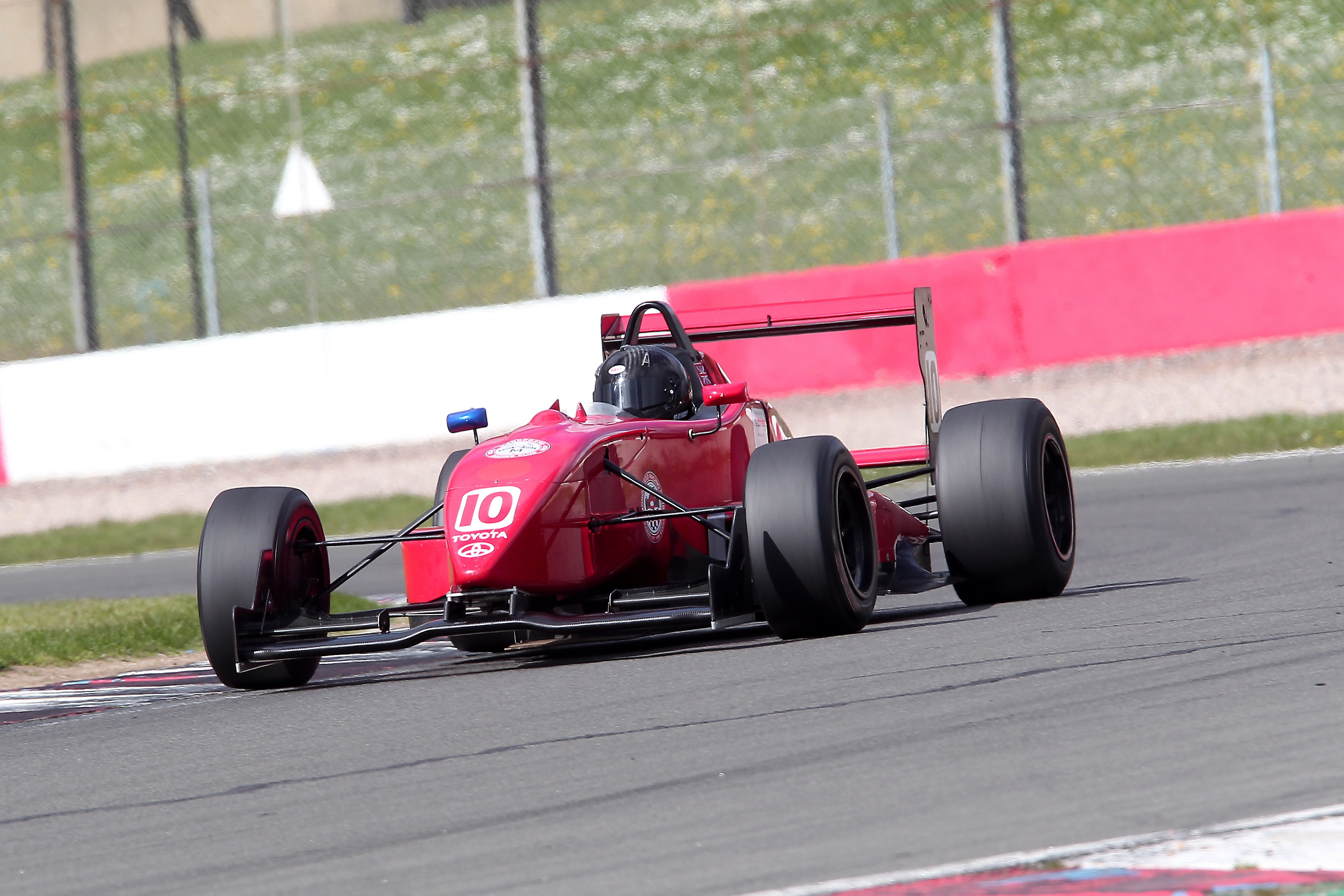 Clutch failure robbed Neil Harrison (Dallara) of victory in the first Monoposto F3, 1400, Classic and 1800 race. Lee Fern then took charge, his Dallara’s winning margin boosted when Chris Davison spun out at McLeans from second. Harrison got his reward with victory in race two. With Fern spinning at McLeans, Robin Dawe was second again.

Dan Gore headed home a Jedi trio to win both Monoposto M1000, 2000 and 1600 races from Edward Falkingham and Robert Bailey.

Reports by Mark Paulson and Peter Scherer. Photos by Steve Jones and Mick Walker. Want all the latest news from the world of national motorsport? Subscribe today and never miss your weekly fix of motorsport with Autosport magazine 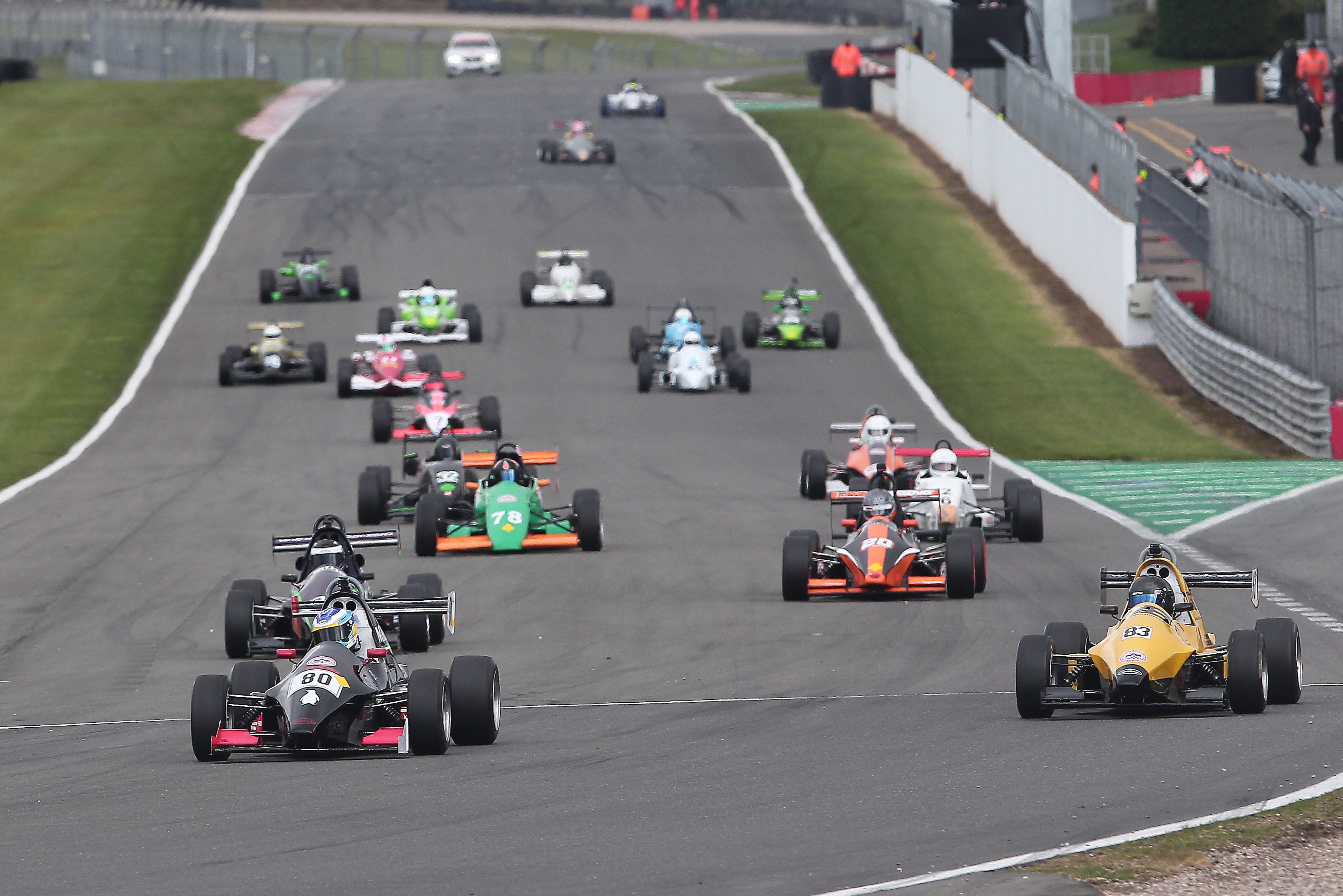 Jedis lead the way in Monoposto