It may have started later than usual, but national motorsport made a welcome return last weekend with bumper grids a common sight at race meetings from Donington Park to Castle Combe

The season-opening Masters Historic Sports Car Championship encounter was ultimately a Bolton benefit as Bolton resident Tom Bradshaw won by three-quarters of a minute in the family’s Bolton-built Chevron B19.

In the early stages, he’d run nip and tuck with the Lola T70 Mk3B of Alex Brundle in an absorbing contest, with the Chevron nibbling at the rear of the mighty Lola. Sadly, it was not destined to last and, just as a safety car period started, Brundle peeled the Lola off into the pits with a terminal gearbox problem.

From the green, Bradshaw took full advantage of the empty track ahead of him to blitz clear of the rest of the pack and complete the perfect start to his title campaign. In Bradshaw’s wake, an absorbing three-way contest raged all the way to the flag. Jonathan Mitchell and Chris Beighton battled for second in another Chevron versus Lola contest initially, as up into fourth came touring car ace Jake Hill, having taken over the Chevron B26 of Roberto Giordanelli.

As he became more accustomed with the car, Hill set a searing pace and hunted down his opponents. But, just as he got up alongside Mitchell on the run out of Redgate, the clutch gave out and Hill toured into a disappointed retirement. Mitchell, meanwhile, battled back ahead of Beighton to grab second place by two seconds at the flag. 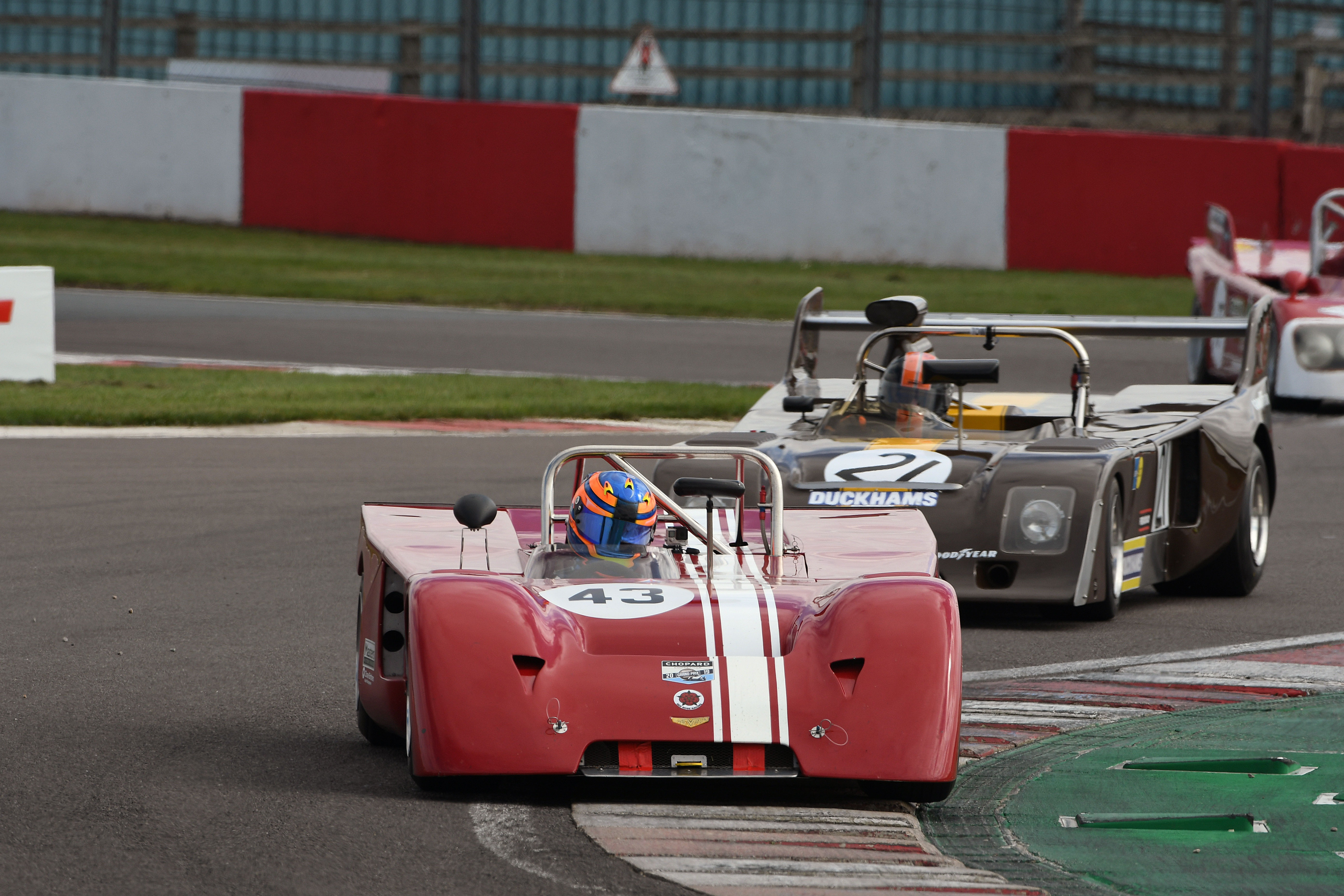 Bradshaw’s friend and fellow Boltonian Callum Grant took a famous win in the opening Historic Formula 2 contest. As others faltered, Grant drove a mighty race aboard his March 79B to finish ahead of Frazer Gibney (Chevron B40). Later, in an enthralling contest, Andrew Smith (March 742) ripped through from the tail of the grid to win from Martin Stretton and Grant – the trio covered by less than four seconds.

The Pearson brothers, Gary and John, claimed another Jaguar E-type victory in the 90-minute Gentleman Drivers’ race, but it was never a straightforward affair. Just two weeks short of the 60th anniversary of the first E-type race win, Gary started in his brother’s car, while Brundle started the race in Gary’s machine.

Unfortunately, Brundle was again destined to non-finish, this time with a radiator problem. Instead, Gary concentrated on John’s E-type and handed it over to his brother mid-race. Two safety car periods, one right from the start, interrupted proceedings and shuffled pitstop strategies. But, in the final sprint to the flag, John had enough in hand as Mike Whitaker’s TVR Griffith and Mark Donnor’s E-type, now in the hands of Scot Andrew Smith, chased hard. Though still recovering from a back injury, and clearly suffering by the finish, John did a fine job.

“I had to give myself a couple of laps off at one point to rest my back. But we made it,” he said. Donnor and Smith were cruelly denied a place on the podium by a very late head-gasket failure, while Whitaker was left to rue the second safety car period when he and others lost out behind a very slow Alfa Romeo, which effectively operated as a second safety car. 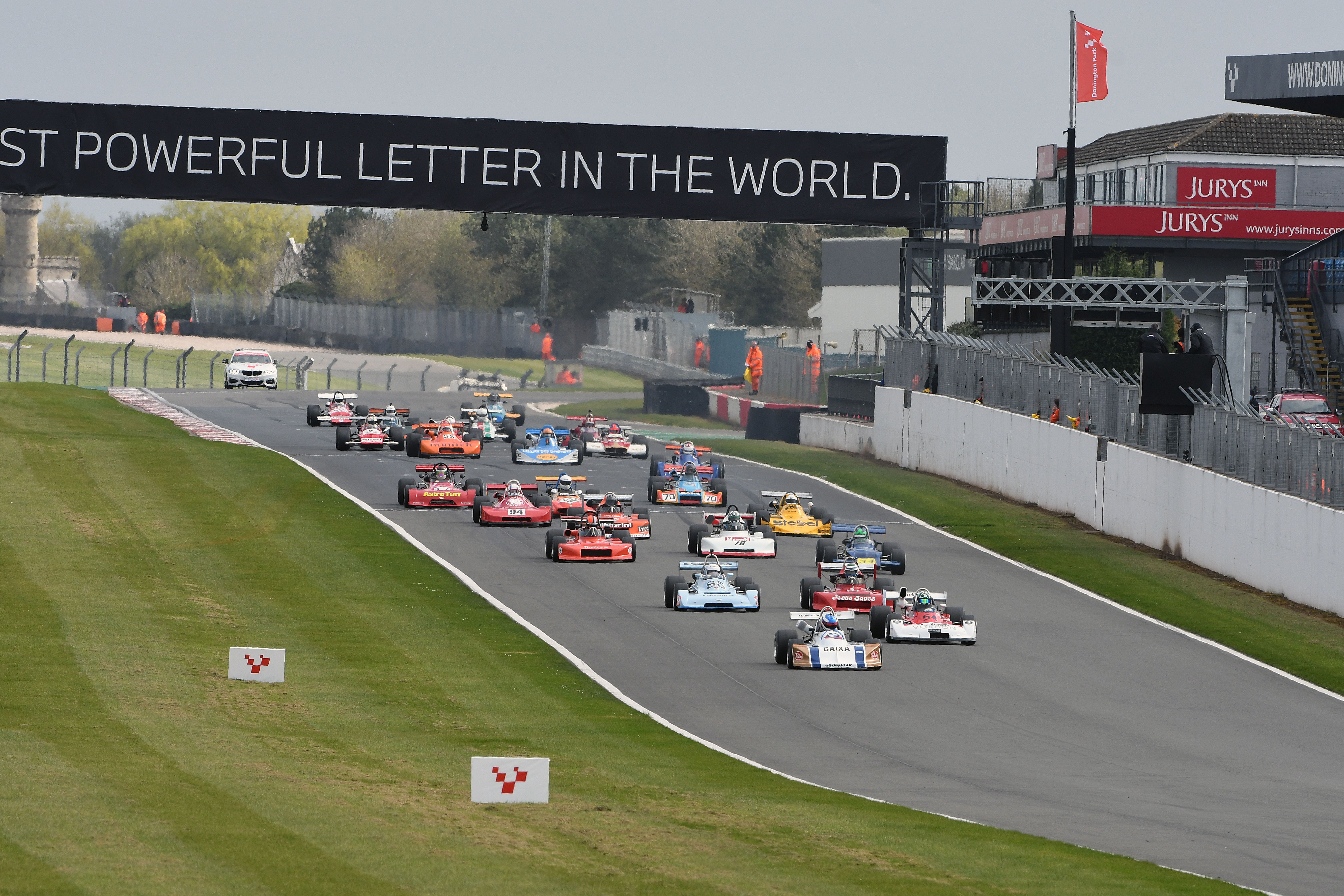 In Classic Formula 3, wins were shared by F2 victor Andrew Smith and Conor Murphy. Murphy won the opener under pressure but retired from the second after Smith (March 783) had gone ahead when the March 803B started to misfire.

Mike Cantillon was the class of the opening Masters Historic Formula One field and won at a canter in his Williams FW07C as Steve Hartley gave valiant, but ultimately fruitless chase, in his McLaren MP4/1. Lukas Halusa was an impressive third in his older McLaren M23.

Under constant pressure from Cantillon in the second race, Hartley looked to have overcome his rival until a moment on the brakes into the chicane with three laps to go allowed the Williams to nip ahead and take another win.

The combined pace of Marcus Jewell and Ben Clucas in the Pre ’66 Touring Cars kept their Lotus Cortina ahead of the V8 ranks, while the Masters Endurance Legends delivered two excellent races. Jack Dex (BR01) and Steve Tandy (Lola-Judd B12/60) ultimately emerged as the victors, but Dex faced a big early challenge in the opener from the similar cars of Max and Shaun Lynn. Dex and Max Lynn then chased Tandy relentlessly to the flag on Saturday but to no avail. 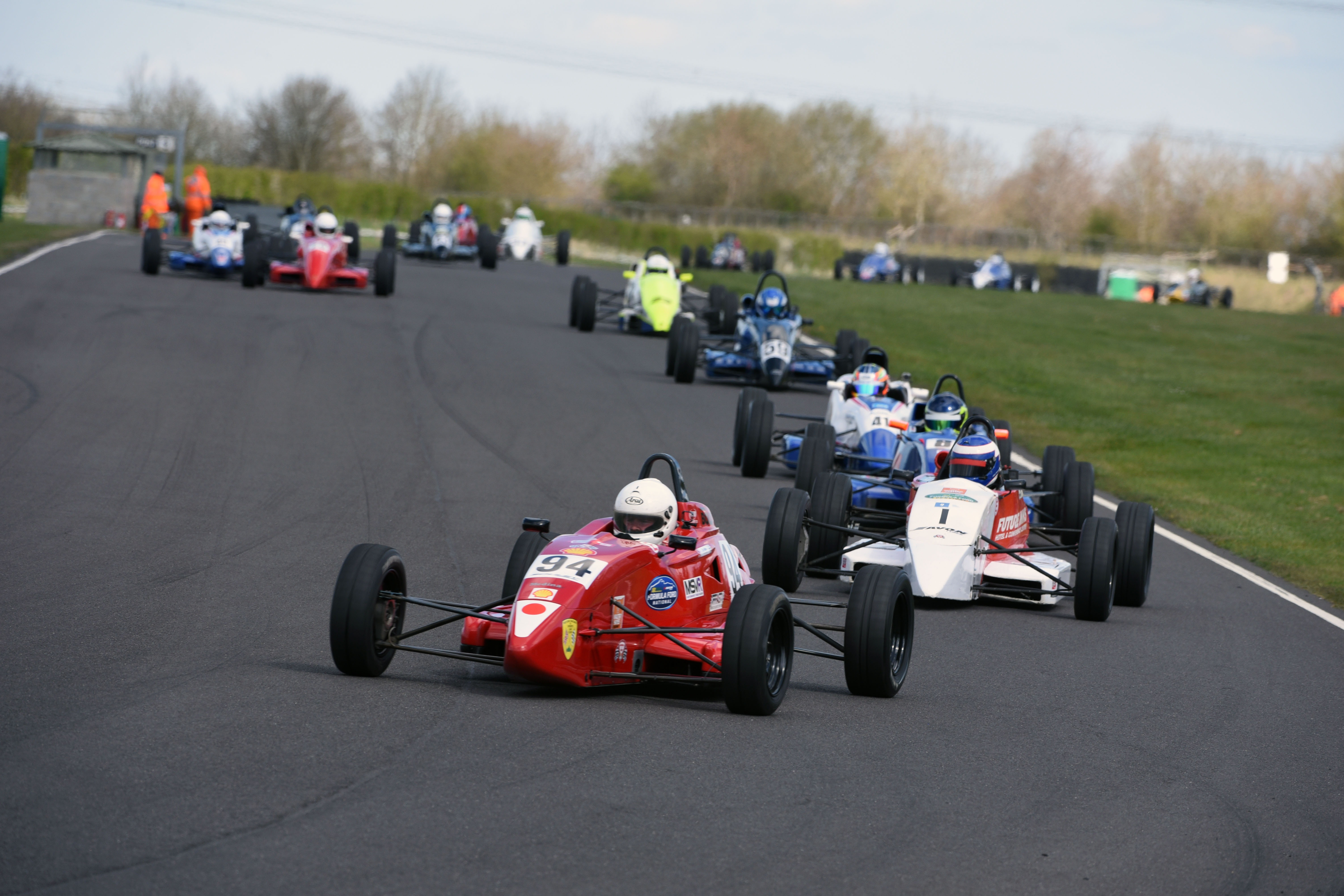 Double-headers for each of Castle Combe’s four resident categories thrilled viewers via livestreaming for Howard’s Day, which opened the Wiltshire circuit’s 2021 season.

All five were locked in combat from the moment the red lights went out, but it all came to a head when White squeezed bold outside challenger Mitchell onto the grass atop Avon Rise midway through the race. Mitchell spun wildly, forcing Fisher into avoiding action, shooting over the grass on the right and just missing White as he exited Quarry, while Fisher ended up in the barriers on the outside.

The sequel was sensational to behold but was without polesitter Fisher, whose car was too damaged to take the start. White, Cooper, Mitchell and Walker ran nose-to-tail throughout the 10-lap contest with only 0.613s separating them at the flag. Ward stormed back from a hairy spin out of Camp on the first lap, hunting down Paul Barnes for B honours again. Steve Bracegirdle split Higgins and Colburn among the earlier cars. 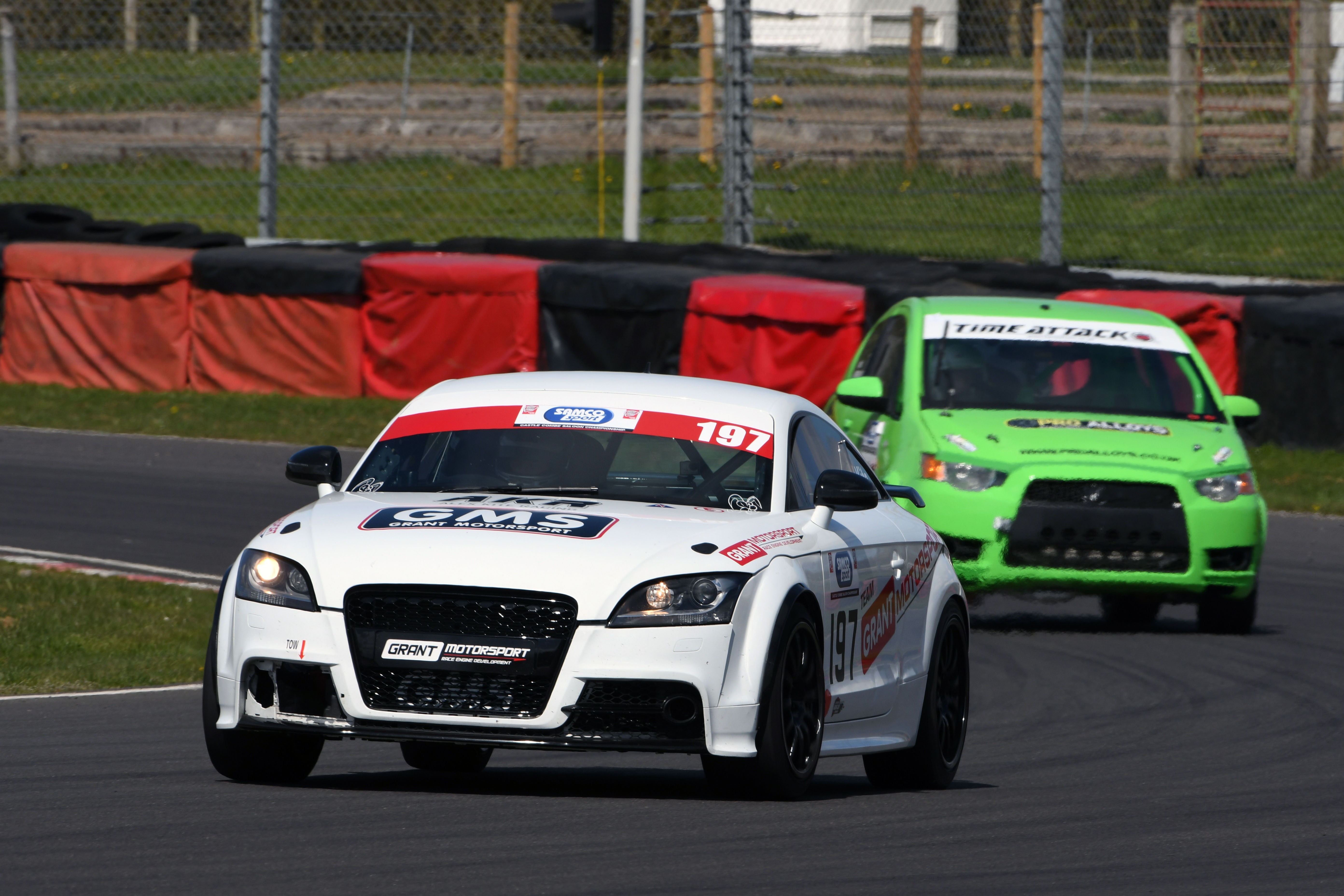 Two breathless Saloon races brought battling and drama aplenty. With front-row starter Gary Prebble out due to a broken rear wheel after a sluggish getaway dropped him into the pack, Kevin Bird (Nissan 200SX) and Alex Kite (Audi TT) flew ahead. Contact between them entering the Bobbies chicane spun Bird and delayed Kite, promoting Neil Greenland and polesitter Simon Thornton-Norris in a Mitsubishi Colt Ralliart shootout. The latter slowed with ignition issues, whereupon Kite surged back before taking the lead and the win from class victor Greenland.

Early leader Prebble slowed dramatically two-thirds of the way through the second race with a driveshaft failure, limping home a lapped ninth in his SEAT Leon Cupra. Thornton-Norris, having fixed his machine, took victory ahead of Kite and Greenland. 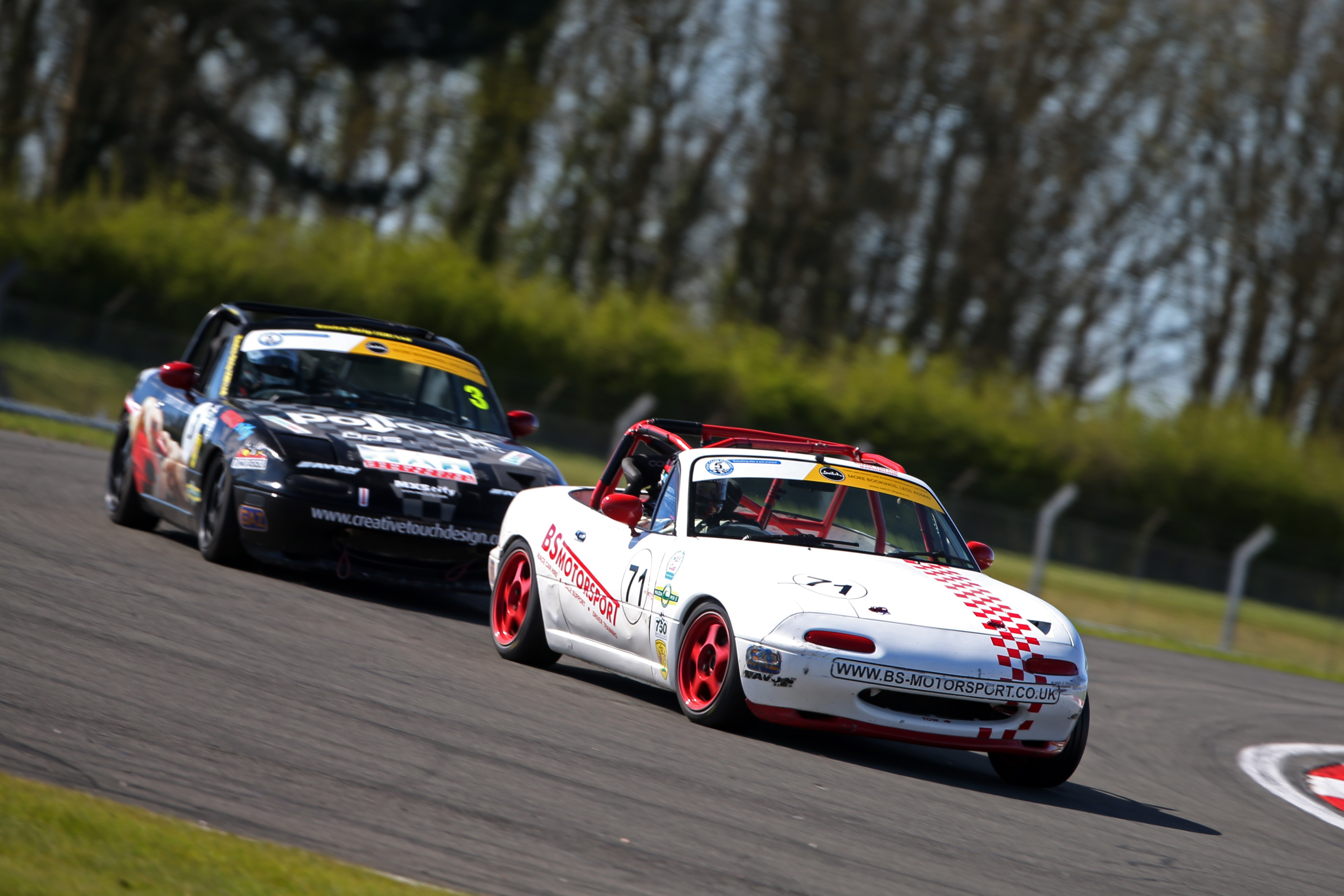 Perennial Mazda MX-5 Cup pacesetter Ben Short was given a thorough workout by series debutant Mike Epps as the 750 Motor Club season kicked off where it concluded last December.

The pair dominated the first encounter, exchanging the lead – and some paint – on a couple of occasions, with Short eventually easing to a one-second win after the former British Touring Car racer missed a gear on the final lap.

Epps thought he’d turned the tables in race two only to be excluded post-race for being underweight. From eighth on the partially-reversed grid, he had made the best of the first-lap skirmishes to run second, then quickly chased down leader Mike Comber, who had earlier recovered to sixth in race one following a first-corner incident.

Boxed in as the pack negotiated the Craner Curves on lap one, Short had to settle for third on the road behind Comber, while Ben Hancy was promoted to his second podium of the day. Drive of the day was arguably from Steve Foden. Narrowly defeated by Hancy in last year’s championship, Foden climbed from row 19 of the grid to fifth on the road in race two, having retired from the opening race with a recurrence of an intermittent misfire.

Stopping during a safety car period at the start of the pit window enabled Carl Swift and Rob Baker to open their Club Enduro title defence in ideal fashion. Swift admitted to having to drive defensively in the early stages to keep Joe Lock’s BMW E46 M3 GTR at bay after passing the polesitter on the outside line. 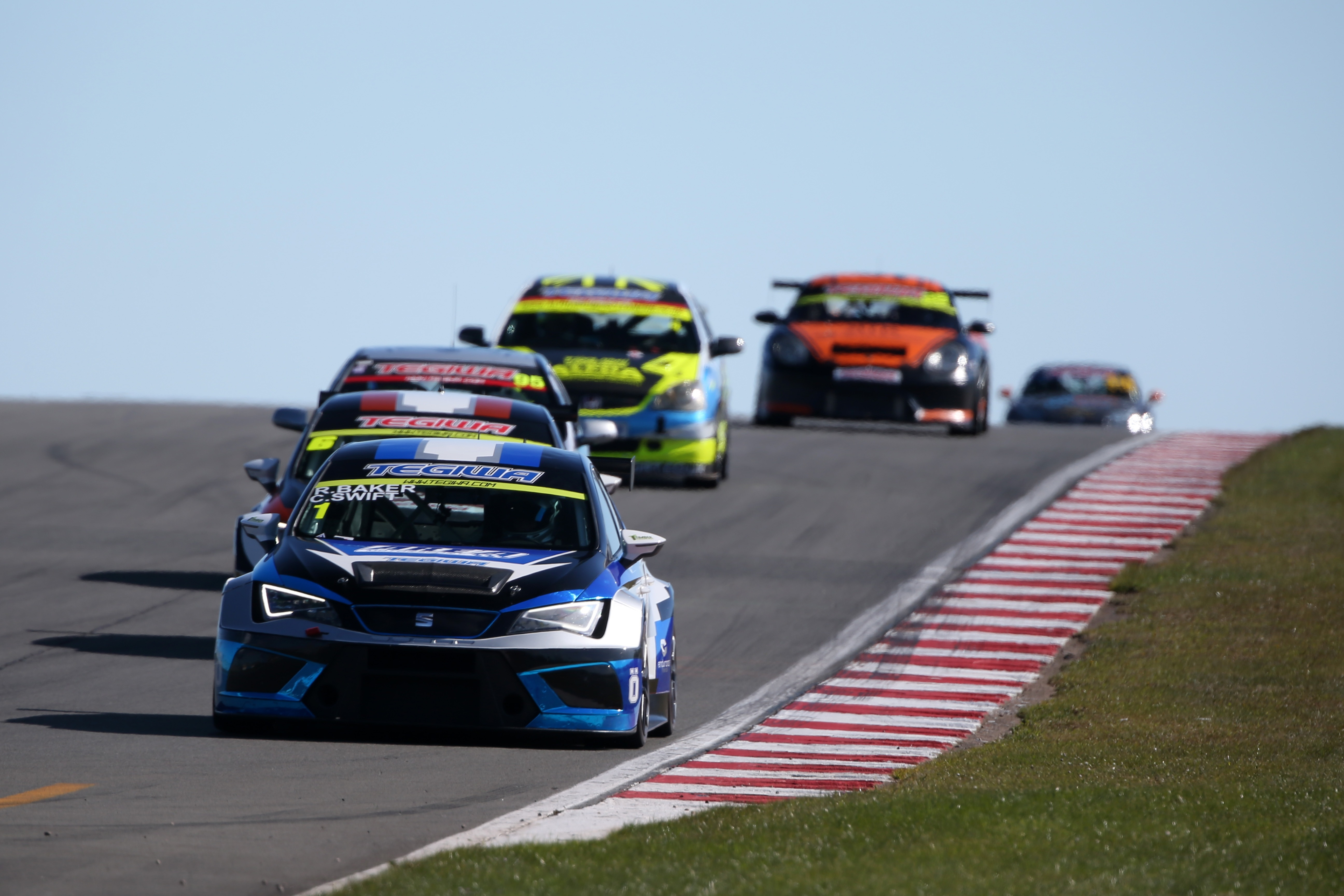 Hampered by a smaller fuel tank, the BMW was approaching a minute in arrears on Baker’s SEAT Leon Eurocup when Lock eventually relayed to Ash Hicklin under green flag conditions. Hicklin demonstrated what might have been by reducing the gap to 3.8s at the flag, as Baker was hampered by tracking knocked askew by contact, while third-placed Chris Boardman also starred during his stint in the E36 M3 he shared with Adam Howarth.

Simon Walker-Hansell was denied Locost race one victory when he was penalised for not rejoining the track safely following a first-lap error at the Melbourne Hairpin. As a result, the polesitter’s impressive recovery drive was rewarded only with sixth. Andrew Tait inherited the win in a typically frenetic race, benefiting from the chaos caused by Geoff Peek’s last-lap spin across the track after dropping a wheel wide at McLeans. Walker-Hansell hit back with a win in race two, enjoying his tussle with Tait for the win after leader Martin West’s mid-race mistake.

Driving the Radical PR6 that took his father to a pair of titles a decade ago, Joe Stables held off Scott Mittell’s new machine to take a Bikesports double. Stables dived inside Mittell at Goddard’s early on in race one, taking advantage of the pole winner’s struggles under braking in his eponymous MC-41RR, now fitted with a Suzuki Hayabusa engine. Losing his diffuser mid-race failed to hamper Stables in the safety car shortened race two.

The combined CALM All Porsche Trophy and Bernie’s V8 race was won by the TVR Tuscan of Matt Holben. Having made a fast start from row three of the grid, Holben took advantage of the longer mandatory pitstop for leading Porsche runner Jonathan Evans (Cayman S) – owing to his pacesetting qualifying time – to move ahead in the pitstop sequence. 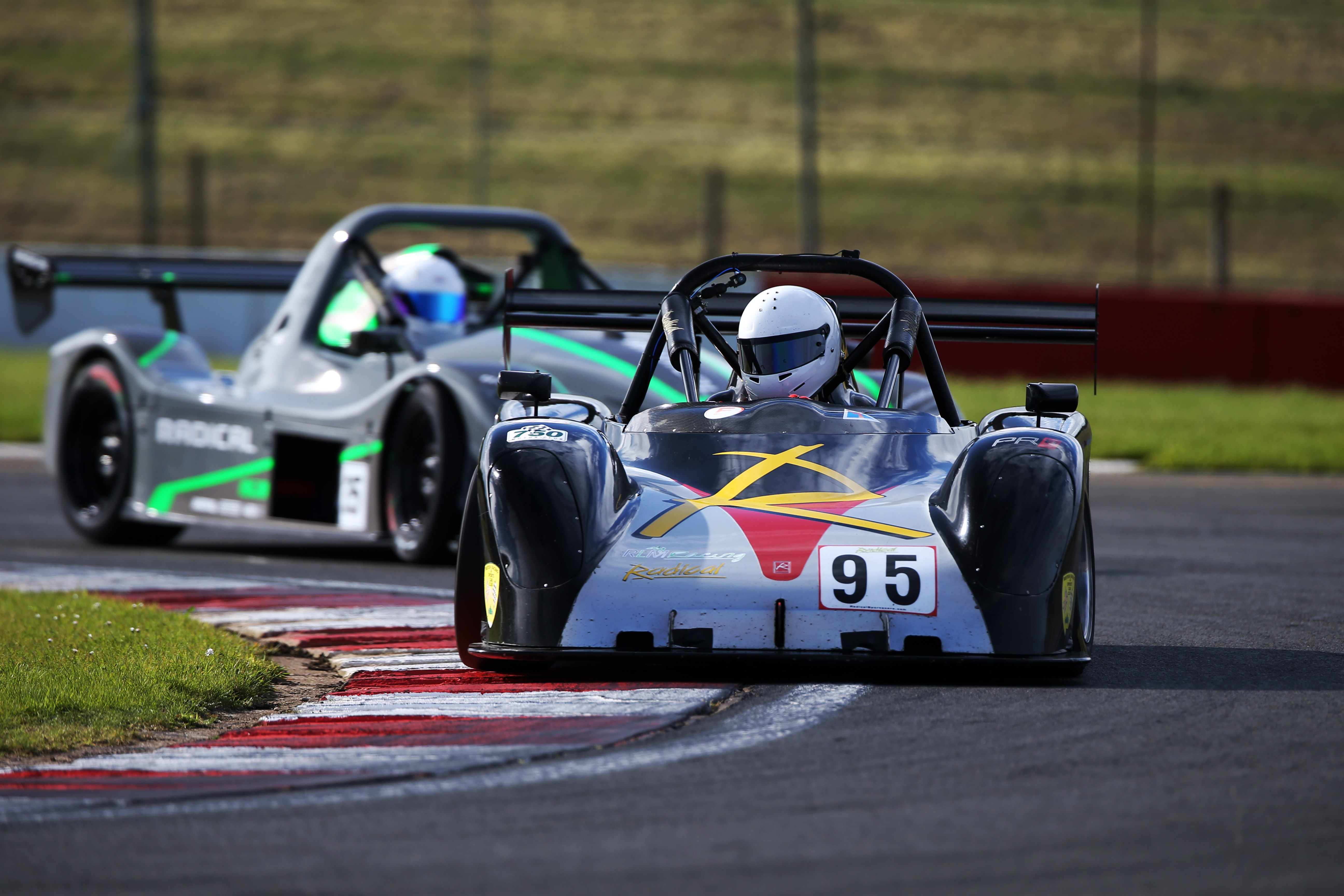