The popular Croft Nostalgia event returned after a two-year absence last weekend, where Samuel Harrison bagged four wins and the Historic FF1600 title. The British Hillclimb and Rally championships were also in action, with the title still very much up for grabs in both.

The spectacle of Richard Evans in the ex-Eddie Cheever March-BMW 782 and Rory Smith’s ground-effect Atlantic Ralt RT4/85 howling round together in the Aurora/Geoff Lees Trophy races wowed a large audience as the Historic Sports Car Club’s Croft Nostalgia event returned after a two-year absence.

But Riponian Samuel Harrison, 18, stole the show, winning all four 1000cc Formula 3 and Historic FF1600 races and the latter’s championship before heading to study aerospace engineering at Loughborough University.

Harrison started racing cars in 2020 but, having not driven Croft, 20 miles from home, was obliged to attend a new drivers’ briefing. He had 12 wins under his belt already this term, and the superb 2.1-mile track soon bolstered his CV. A combined 2m14.866s margin of victory tells its own story.

It was a similar story in Mike O’Brien’s Classic Team Merlyn, Harrison clinching the coveted crown on Saturday, 38 seconds clear of Oliver Chapman (Lola T200) and Irishman Cormac Flanagan (Alexis Mk14). Callum Grant entered the second race after winning Sunday’s Classic FF1600 opener and claimed silver from the back, with Rob Smith third after an excursion to miss Flanagan’s three-wheeler at the chicane. 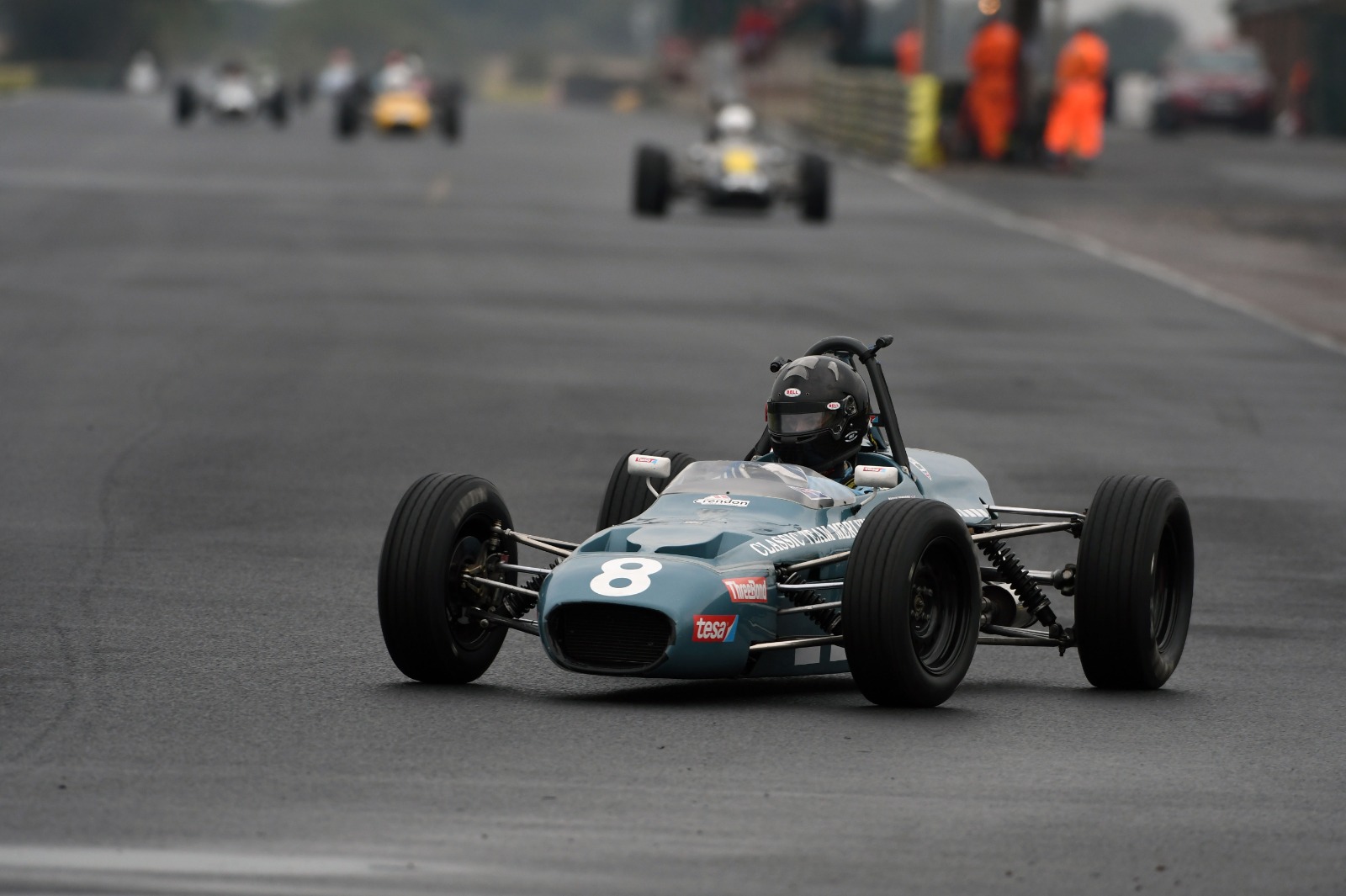 Saturday’s Aurora race was stopped for zero visibility in the spray, then abandoned – with Evans ahead at a venue where dad Jim raced F2 cars in Formule Libre – after John Hayes-Harlow crashed his Ehrlich heavily approaching Barcroft, without injury. Smith won Sunday’s race from Ridgway, flying in his recently acquired March 742.

The contrast between Historic Road Sports conditions was stark, but John Davison won both “on my favourite circuit” in his black Elan. The reigning champion puddle-jumped clear of John Shaw (Morgan +8), who beat Kevin Kivlochan (AC Cobra) to V8 gold on Saturday. Davison outbraked ‘Keki’ into Clervaux on Sunday, when the track remained slippery, and stayed there. 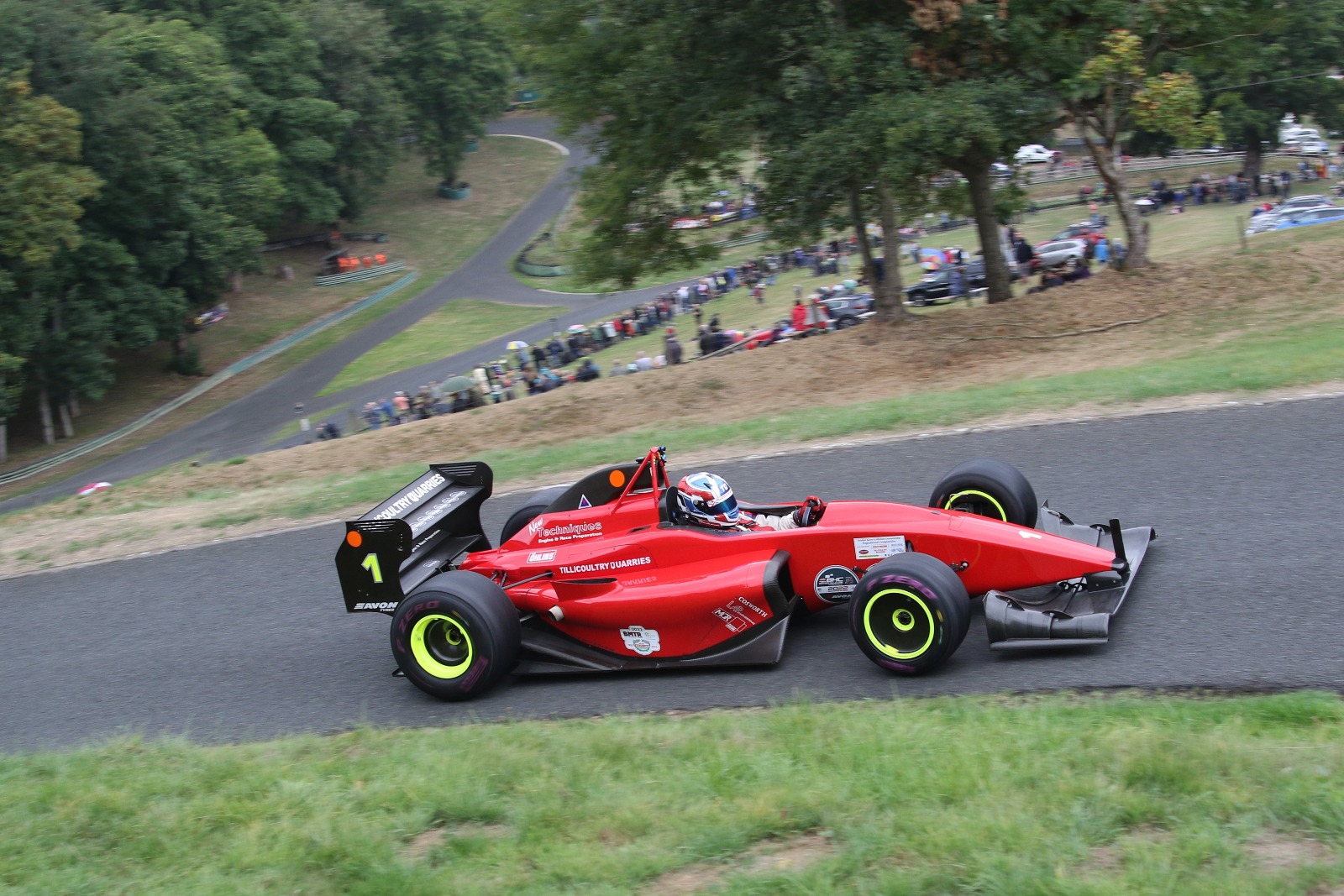 The contest for the 2022 British Hillclimb Championship moved to a shower-affected Prescott with another run-off victory for reigning champion Wallace Menzies ahead of the Loton Park finale.

Menzies and Alex Summers enacted the latest instalment of their titanic season-long contest for the British crown at the Gloucestershire venue. The big variable on Sunday was the weather, with light showers impacting the class runs and run-offs. In the dry opening class runs, it was Scott Moran who set the pace on 35.50s to be fastest qualifier for the first run-off. But as the first runs got under way, a light drizzle started to fall.

Those who had qualified in the lower end of the top 12 had the pick of the conditions and, after qualifying ninth, Dave Uren had the best fortune of all. He turned in a great climb to take his second run-off win of the season in 37.09s, heading the under two-litre cars of Paul Haimes and Stuart Sugden. “We had the luck of the weather,” said Uren, modestly.

The big guns running later – including Summers, Menzies and Trevor Willis – all finished in the lower end of the run-off, with Menzies heading Summers in eighth and 10th respectively. Due to run last, Moran opted not to risk the car.

In the afternoon, following a lengthy delay to deal with a medical issue for a spectator, it was the class runs that were hit by the weather, and those who ran early or late in the order got a better deal. A very shuffled run-off featured five 1100cc single-seater drivers as well as the big hitters in the most diverse line-up for a very long time.

Incredibly, three members of the Summers family all made the cut – Alex’s wife Debbie and father Richard, sharing their 1100cc DJ Firehawk, both qualified to create a remarkable family record. By the time the run-off started, the track was drying fast. Willis set a fine personal best to leave the target at 35.61s and Moran was close behind on 35.65s, though admitted to being a little cautious under the trees in the Esses.

Last to tackle the climb were Summers and Menzies, and everything rested on the final two runs of the day. Summers was quick and fired the DJ Firestorm up the hill in superb style to stop the clocks on 35.11s. Menzies had sat on the line trying to avoid knowing his rival’s time, but a display popped up to tell him what he had to do to take maximum points and fend off Summers in the title race.

Sure enough, Menzies dug deep and beat Summers by just 0.06s to take the run-off victory with a 35.05s. Menzies summed up proceedings: “It’s been a really odd day. In the second run-off I knew that Alex had given it full send and that there had been enough grip, so I had to ignore what we’d learned from running in the damp.” 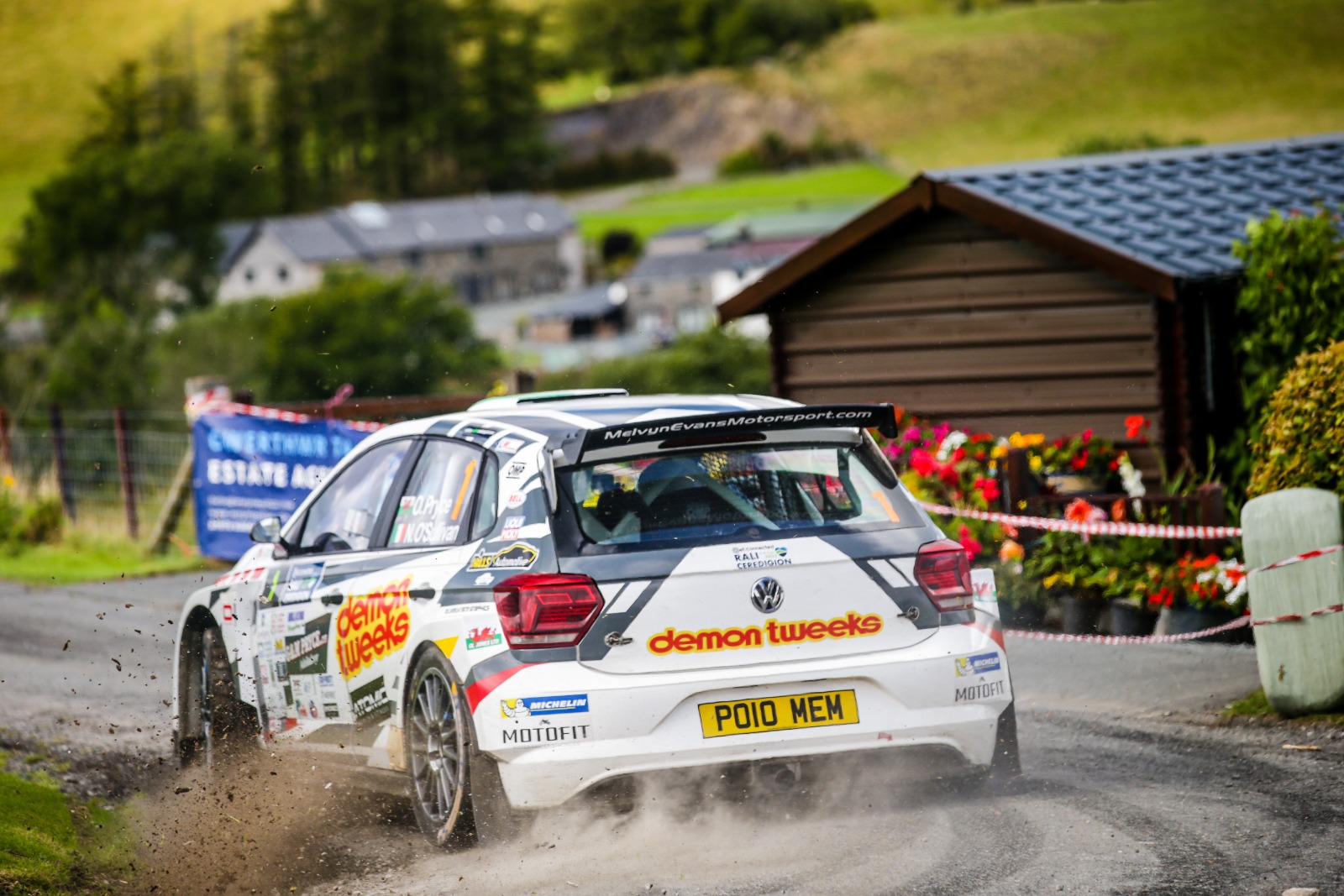 Osian Pryce could almost feel the weight of the world lifting off his shoulders on Sunday night, after he ensured that his campaign to finally become British Rally champion remains on course by taking the maximum points haul at an impressive Rali Ceredigion.

While the Welshman couldn’t live with the pace of the eventual rally winner, World Rally Championship ace and former Hyundai factory driver Hayden Paddon, Pryce did all he needed to do to close on that elusive BRC crown that he has been within a whisker of three times in his career.

With the rally based in Aberystwyth, just a short drive from his home, Pryce was well aware that he needed to win to hunt down championship leader Keith Cronin. Arguably in the pound seat after winning the inaugural running of the event in 2019, Pryce played second fiddle to the Irishman following the opening two seafront blasts, but it wasn’t long before it all came tumbling down around Cronin’s ears.

A high-speed roll just a few hundred yards into the final test on Saturday night put Cronin’s Volkswagen Polo out on the spot and it left James Williams, debuting the Hyundai i20 N Rally2 on UK soil, in the BRC lead. But Pryce had a weather eye on proceedings during Sunday morning and, although it started wet, he had an inkling that it would dry out quickly on the moors – and it did. As those around him bolted on wets, Pryce and co-driver Noel O’Sullivan threw on the slicks in a masterclass move. Cue the BRC lead after the opening stage of the day.

The Volkswagen Polo GTI pilot assumed control from there on to take the maximum BRC points and second overall to Paddon’s Hyundai i20 N R5. “I’m over the moon with that one,” said Pryce. “There’s a number of people that could have taken the win this weekend to be honest, but I’m really impressed with how everything has gone, I’m super-happy with the car.

“You only have to look at the calibre of the guys who haven’t made it to the end. It’s clearly no mean feat to finish this rally and with a car that’s pretty much unmarked; it’s been a pretty special weekend. A huge thanks to all my supporters who have got me here. There’s now just the small matter of finding the budget for the next one.”

Williams did enough to retain second spot in the BRC after a taxing day in the Hyundai. A “scrappy” run over Sunday morning’s loop on the wrong tyres for the conditions kept him at arm’s length from Pryce but well ahead of Ruairi Bell in his Skoda Fabia R5, who was third BRC driver home. Williams also netted maximum Protyre National Asphalt points with his drive.

The BRC also crowned its first champion of the 2022 season as Eamonn Kelly did enough to seal the Junior British Rally Championship title with two rounds to spare. Kelly endured a brush with a Welsh wall on his way to a maximum points haul and a sensational early crown.

It’s back to the forests next when Trackrod Rally Yorkshire hosts the penultimate round of the season at the end of this month.

Want more reports from the world of national motorsport? Subscribe today and never miss your weekly fix of motorsport with Autosport magazine 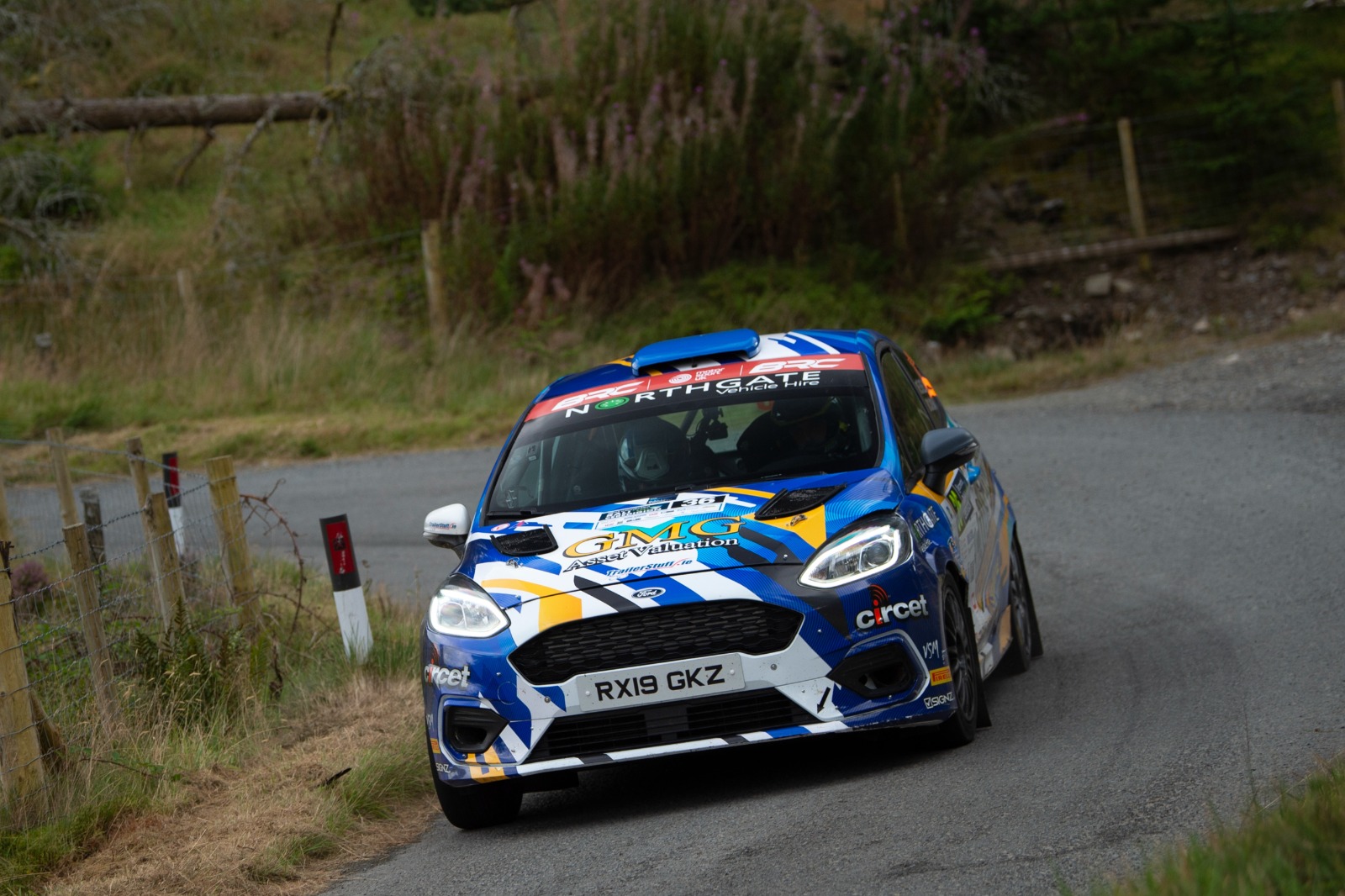