Despite heading into the final round of the British Rally Championship on the back foot, Matt Edwards came away with victory on the Ulster Rally and his third title on the bounce. While at Brands Hatch, Gary and Ian Mitchell finished on top in the season-ending EnduroKa contest

If Matt Edwards has taught followers of the British Rally Championship any valuable life lesson it is that you should never give up, even when the odds appear to be heavily weighted against you.

Going into last weekend’s deciding round, the Ulster Rally, Edwards had it all to do. He trailed title rival Osian Pryce by eight points, and he needed to win in a car he’s had minimal opportunities to test, on an event that was taking place three months later than normal, with two thirds of the final loop of three stages running in darkness.

All of the pressure was with the Welshman, and that was before talk of him becoming the first driver in the 63-year history of the BRC to win the title three seasons running was added to the equation. In the end, Edwards and co-driver Darren Garrod did what they needed to do, winning the rally after Pryce bowed out on the penultimate test, his Volkswagen Polo R5 leaving the road and ending up in a field.

On the seven stages before that, the Melvyn Evans Motorsport team-mates took turns at topping the timesheets. At its largest, the gap between the pair was 9.1 seconds and at its smallest it was only two.

“We both had moments – I nearly hit a wall on the second-to-last stage,” recalled Edwards. “It has been such an intense and demanding day. Judging the pace was probably the hardest thing of all, I think. Huge credit to everyone who has helped and supported me this year. It has been a huge effort from everybody. I’m just chuffed that we’ve pulled it off after two years of waiting due to COVID.” 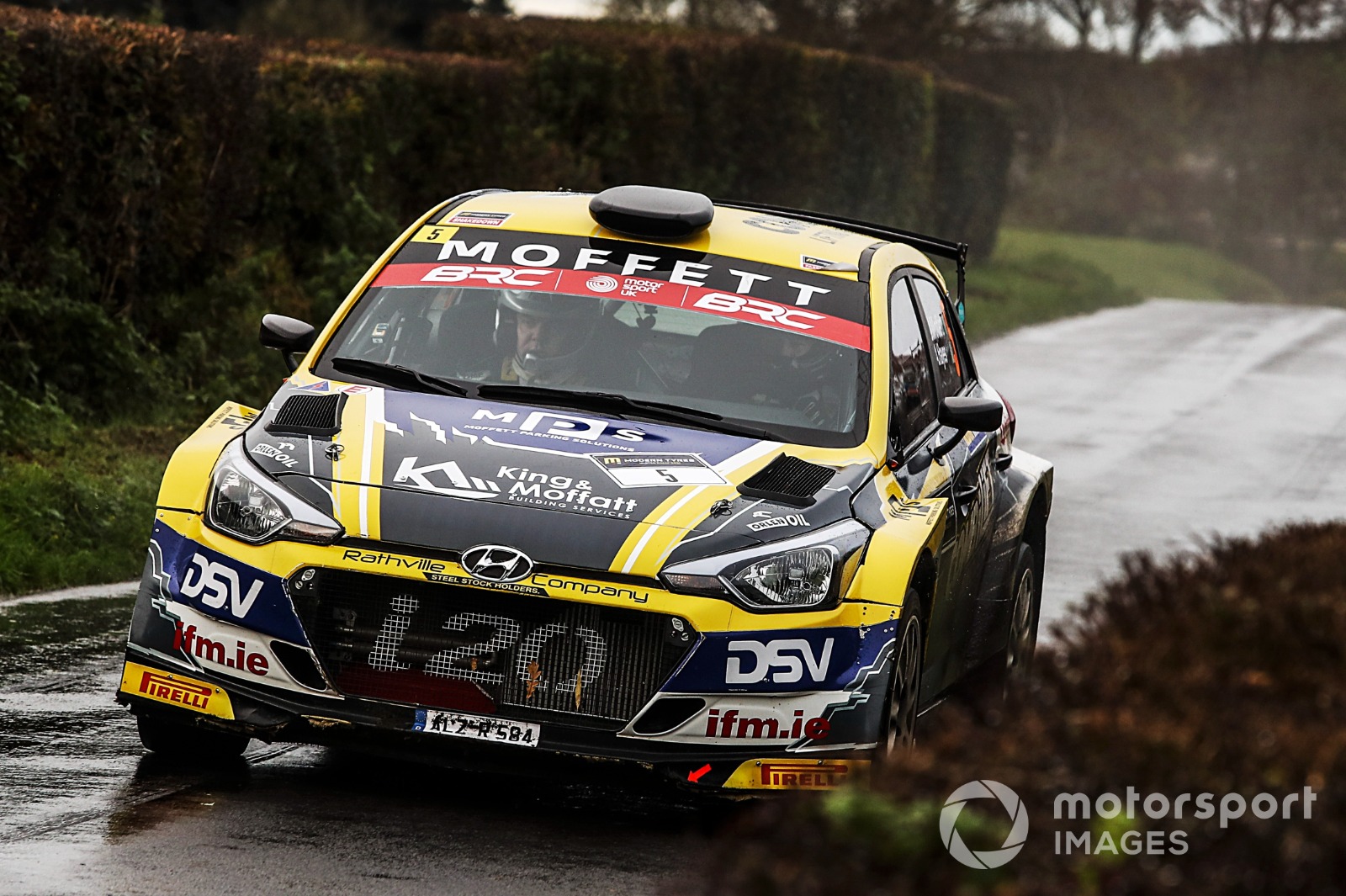 The late retirement of Pryce and co-driver Noel O’Sullivan promoted Josh Moffett (Hyundai i20 R5) up to second on his first BRC appearance since August’s Grampian Forest Rally.

Moffett benefited when four-time champion Keith Cronin incurred time penalties. The Irishman had a torrid return to his home round of the championship. To keep him in the event, his mechanics had to hold onto his Ford Fiesta Rally2 car four minutes longer than the allowed time to get to the bottom of a glitch that sent it into ‘road mode’ following a heavy impact on stage three, which dropped him to third.

Sam Moffett was another BRC returnee and surprised many by reverting to the older R5 version of the Fiesta. He too had problems and admitted that failure to bed in the car’s brake pads beforehand had been a schoolboy error. The subsequent overheating cost him bags of time, as did an off down a field on the penultimate stage that required the help of nearby spectators to get him freed before he took fourth.

The Junior British Rally Championship was also settled. Like the main BRC1 title, it was a two-horse race involving William Creighton and Eamonn Kelly. Despite a scrappy drive by his own high standards, and a near-miss with a concrete gate post, Kelly took a second victory of 2021.

But that wasn’t enough to deny Creighton the title. Twice a runner-up, it was a case of third time lucky for the 24-year-old, whose reward is a funded drive on a round of the World Rally Championship next season. 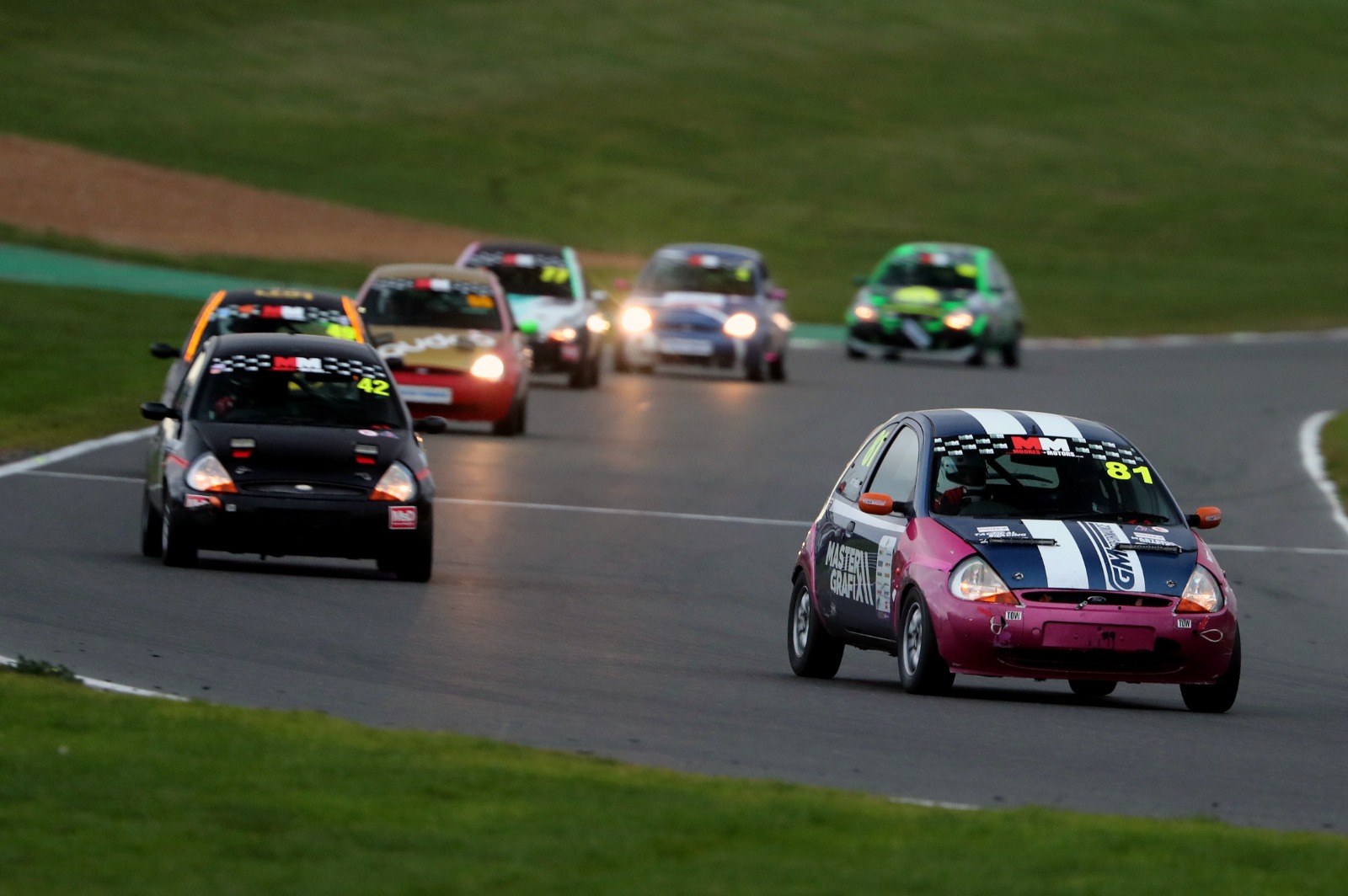 Brothers Gary and Ian Mitchell beat more fancied teams to win the third running of the EnduroKa IndyKa 500 race, which brought the Brands Hatch season to a close.

The GM Performance pair moved steadily up the leaderboard, reaching the front on lap 181 out of 396, and stayed in the running from then on. The top three, including second-placed father-and-son pair Simon and Adam Bonham, made only three pitstops each.

Callum and Jim McDougall, partnered by Mike Marais and Leon Bidgway, impressed throughout and were elevated to third by a penalty for Paul Robson, Dave Mayer and Stratton Mackay, who made five pit visits. By comparison, 2015 Le Mans 24 Hours winner Nick Tandy and his trio of co-drivers stopped 11 times on their way to seventh.

Adam Blair maintained his unhappy record of not making the podium at this event when the IP Racing car he shared with Scott Parkin, Oliver Wilmot and Mark Witherington lost drive and left him stranded moments after taking second place in the closing minutes.

Mini Challenge stars Dan Zelos, Max Coates and Dominic Wheatley were on course for a top-four finish when their car succumbed to worsening gearbox problems, triggering a slightly early chequered flag when it stopped.

Sunday’s enduro was supported by a quintet of races on Saturday, including the last Champion of Brands Formula Ford 1600 races before a format revamp. These drew a small field, but featured hard-fought duels between Walter Hayes Trophy top-six finisher Lucas Romanek and Morgan Quinn in Van Diemens. 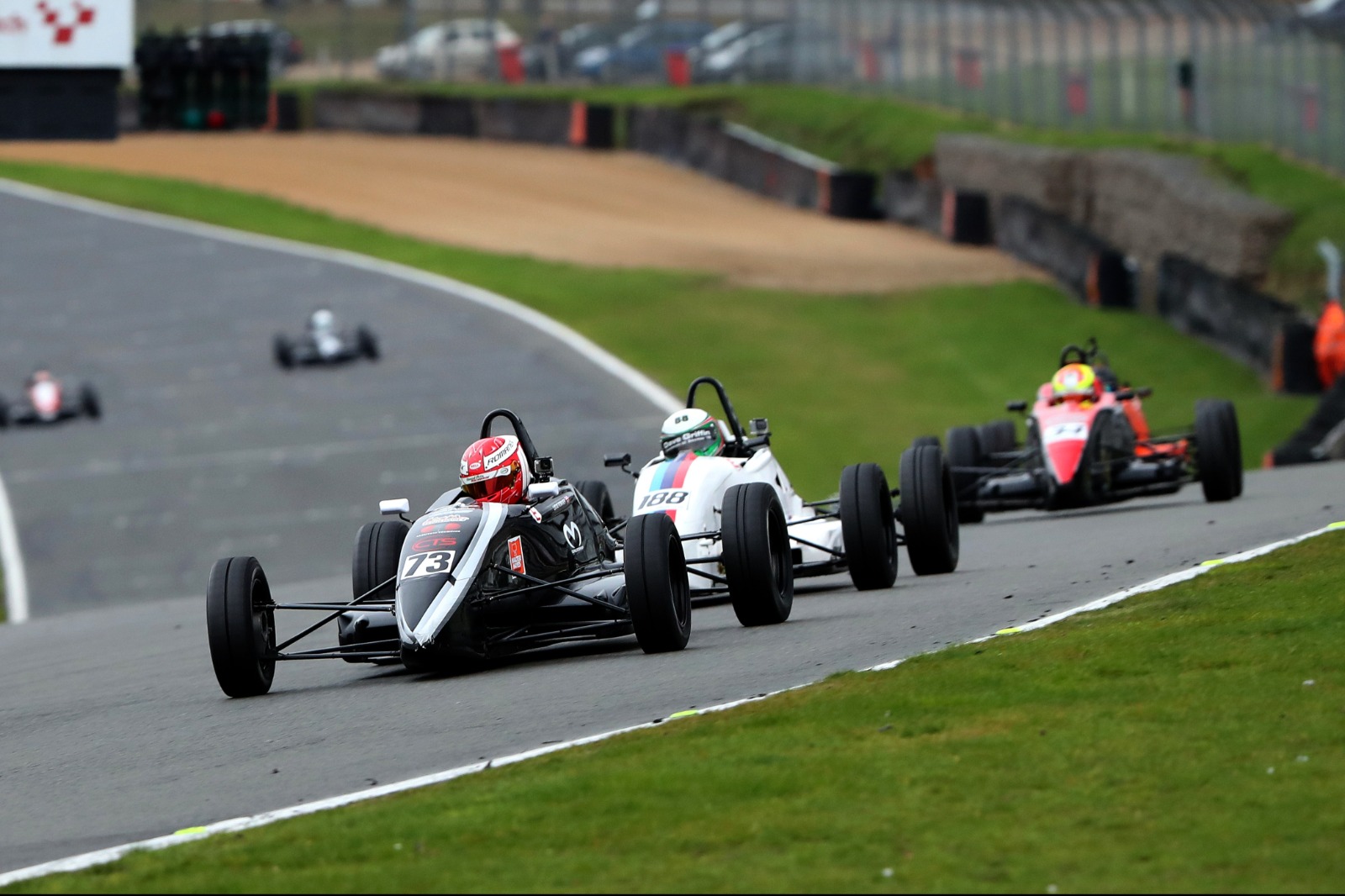 A quick start from second on the grid gave Romanek the race-one advantage, but Quinn probed his defences for the next 18 laps and finished less than a car length behind. Romanek won again in race two, but not before Quinn pounced at Paddock Hill Bend two tours from the end, only to hand back the lead with a mistake at the same spot the next lap.

Diesel Volkswagen Golf driver Scott Parkin had already wrapped up the Trackday Championship, and added another success in the seasonal finale while Chris Payne’s Caterham Supersport recovered from a poor start to finish second. Third, just over a lap behind, went to John Lyne’s BMW E36, which was one of those that lost out when the safety car couldn’t find the race leader during the inevitable pitstop confusion.

Parkin also won his class in the MSV Supercup, but the story of the race was Darren Goes’s effort to win overall and take the title from Nick Jackson and Ollie Pidgley in an older SEAT. Pidgley needed to get past in order to defend a small points advantage, but lost power and had to settle for fourth. His team-mates Dylan Brychta and Martyn Smith took the fight to Goes in another SEAT, but couldn’t unseat him from the lead.

The hard-working Parkin Golf needed a full service in the minutes before its third outing of the day for the Trackday Trophy, and would have missed the race but for a first-corner shunt that caused a stoppage. Ryan Parkin handed over to brother Scott late in the pit window, and they inherited the lead when Chris Kirby’s Caterham, seemingly on its way to a win, expired in a cloud of steam. A four-way struggle for the following places went to Lyne’s BMW. 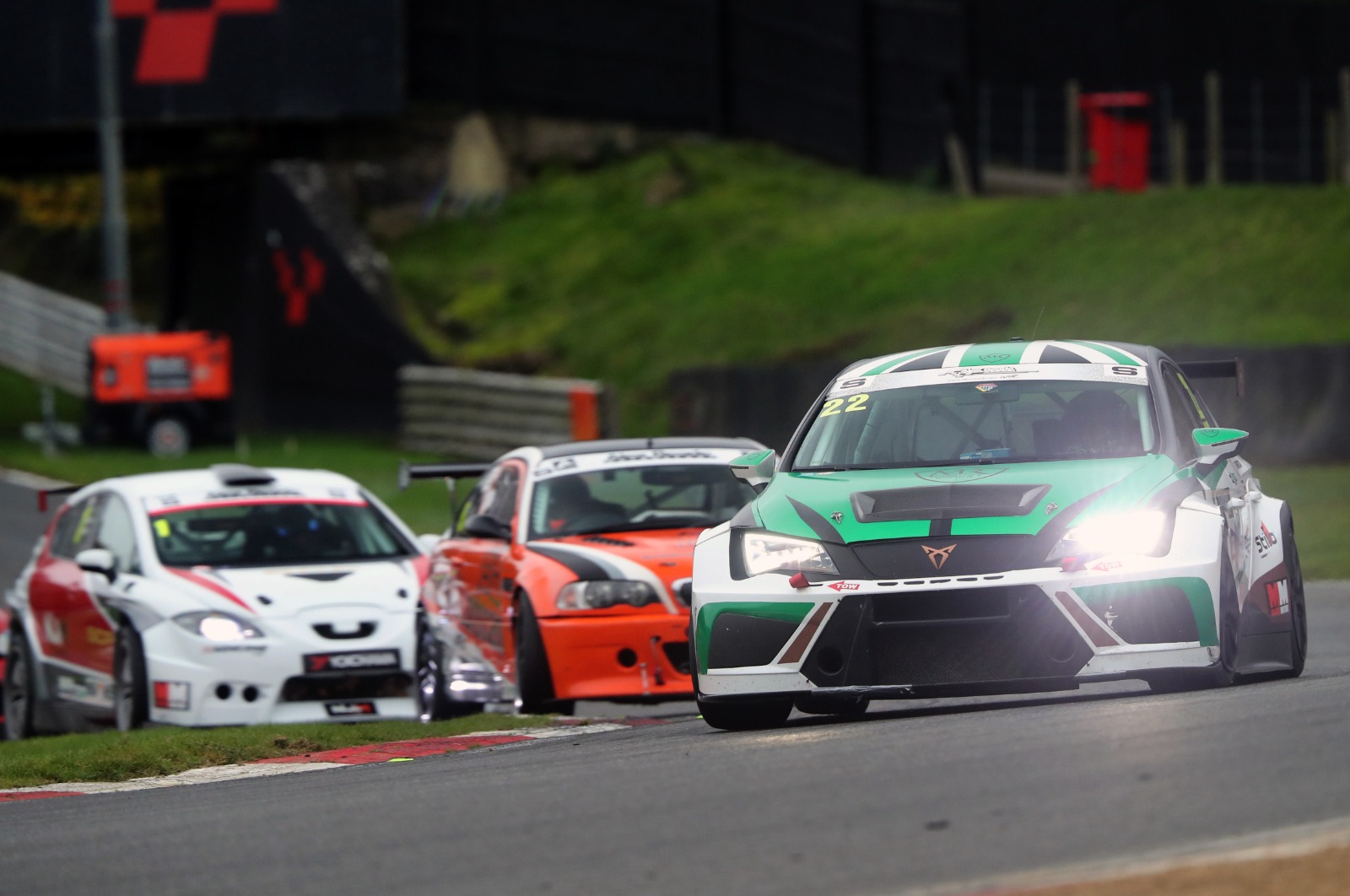