The Lister-Jaguar Costin pairing of James Cottingham and Max Girardo triumphed over a plethora of Shelby Cobras in the three-hour Pall Mall Cup at Silverstone. While elsewhere over the weekend, there was further racing action at Donington Park and Knockhill

With damp patches off-line, legacy of a deluge – and mini-tornado – that delayed qualifying, Cottingham forged Girardo’s Costin-bodied car ahead at the start. He spun exiting Luffield, though, under pressure from British Touring Car star Rory Butcher in William Paul’s Jaguar E-type and the 43-car pack, led by Irishman Michael Cullen’s Daytona Coupe and Harvey Stanley in DK Engineering’s Huffaker E-type. “I ran out of lock, reversed off the grass and did a three-point turn,” said Cottingham, who came round 19th.

Butcher then pulled off the Hangar Straight on lap four, triggering a short safety car period. The car was repatriated to the pits, where a broken halfshaft was replaced. Stanley thus led, but Cottingham soon powered back ahead, pursued by Gareth Burnett, charging in Michael Birch’s ex-works/Graham Hill Lotus 15. Miles Griffiths, flying in an Elan, was harassing Burnett when he careered deep into the gravel at Club on lap 14.

Ben Gill thundered his Cobra into fourth before George Pochciol (Daytona Coupe) and Nick Sleep (Cobra) growled past. Burnett relayed Birch and Cottingham installed Girardo a lap apart, with Jordan already middle-stinting for Alderslade. Girardo equalled his partner’s spin tally with a rotation at Stowe before setting into an ultra-consistent rhythm ahead of Birch, who ceded to Richard Bradley after five laps.

Jordan halved his minute deficit to Girardo before Alderslade resumed, with Rob Hall third in French-Lebanese Greg Audi’s Cobra and Jeremy Cottingham fourth in the DK Jag. All eyes were on Bradley, catching the quickest Cobras, with a realistic prospect of a late pop at the Lister. Alas Bradley was squeezed over the kerbs at Becketts during lappery and the Lotus fell to rear suspension failure. 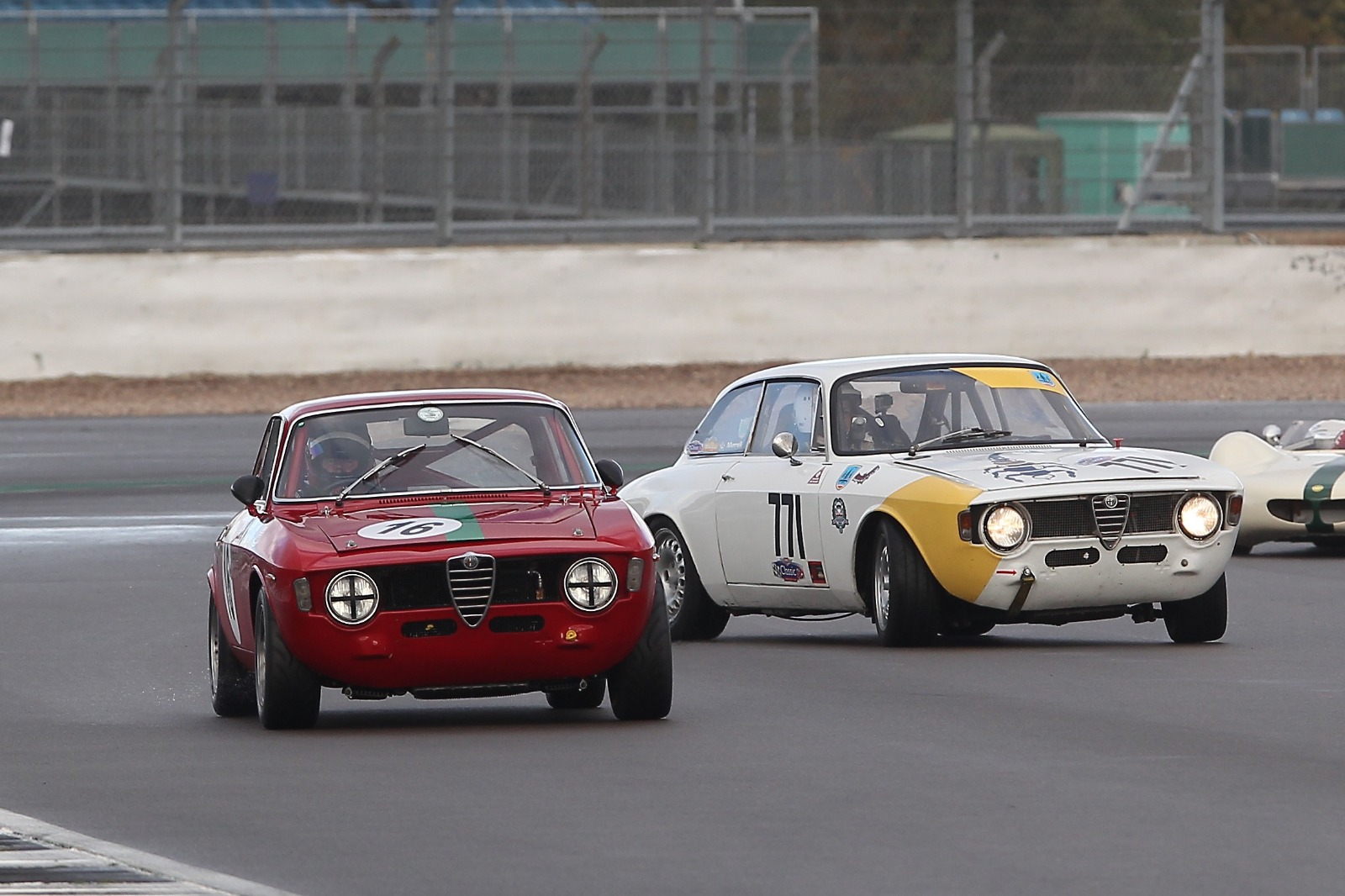 The closing stages were gripping as Sam Tordoff (who succeeded Paddy Shovlin in Cullen’s car) and Olly Bryant (who was in for Matt Wrigley in Pochciol’s) reeled Alderslade in. When Girardo put James Cottingham back into the Lister, new tyres were fitted during the mandatory five-minute stop and the Daytona Coupe trio negated their two-lap stagger. Bryant and Tordoff – who set fastest lap – ousted Alderslade, but Cottingham was 47 seconds ahead of Olly at the chequer. Alderslade also went the distance, a lap clear of Audi and Joel Wykeham (who took over Sleep’s Cobra from Alex Montgomery), with class winners Stanley and Marcus Weller, anchoring Will and Michael Schryver’s Elan Shapecraft coupe, seventh and eighth. 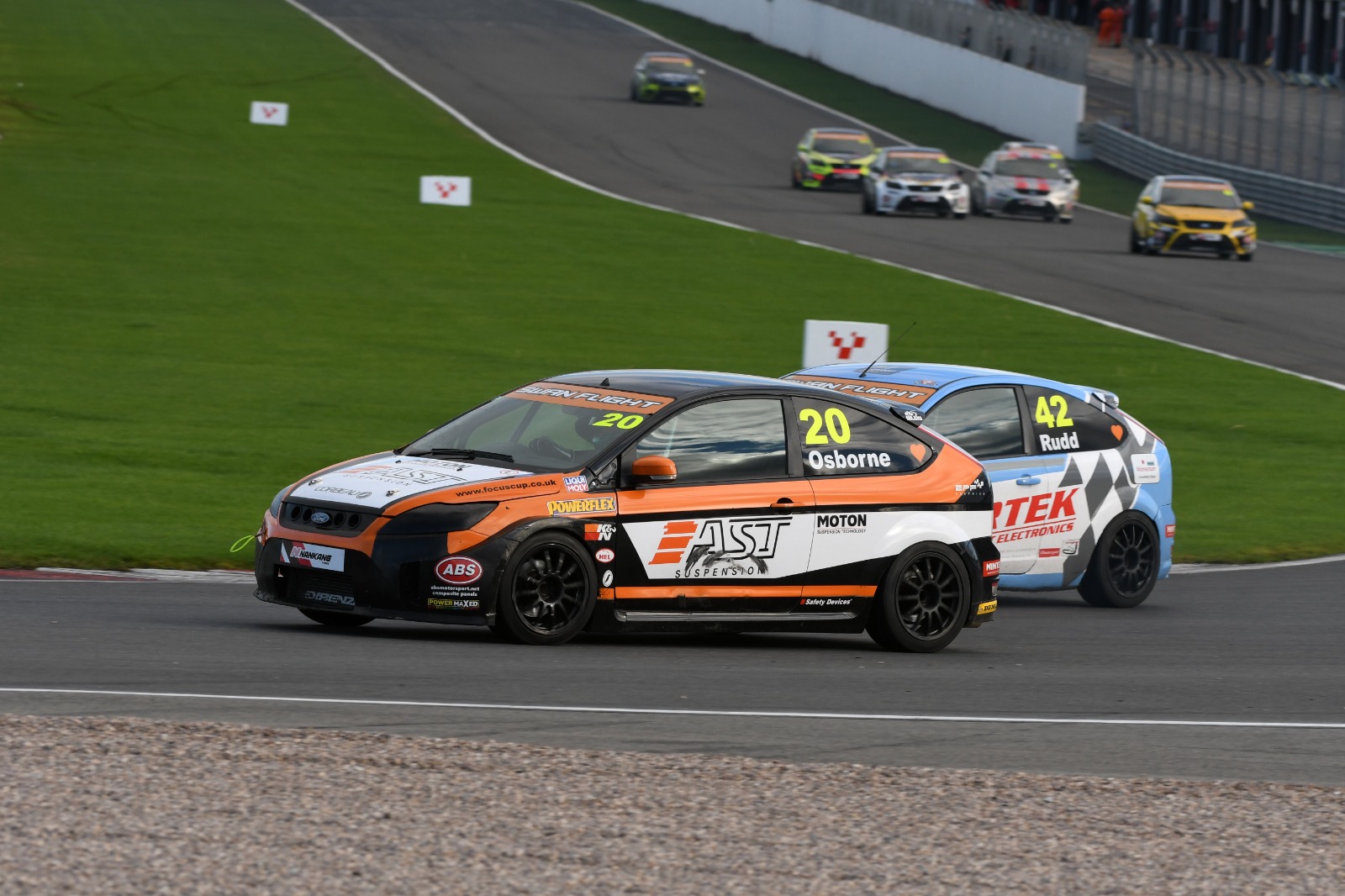 Ginetta Junior graduate Jamie Osborne made it three wins out of three on his debut in the Focus Cup at Donington Park.

From pole, Osborne instantly got to grips with the turbodiesel machinery and made his decisive escape on the opening lap of a wet first race, with Simon Walton heading the initial pursuit from Lewis Ryan. After ousting Ryan on lap three, Simon Rudd reeled in Walton, and took second into the chicane three laps later. But Osborne was a long way up the road, taking the win by over 12 seconds from Rudd, who secured the title. Walton kept Ryan at bay for third.

Ian Mitchell led the opening lap of race two before running wide, and Ryan and Osborne therefore headed a four-car break. Osborne soon got the jump at the Old Hairpin over his rivals, while Ryan, Walton and Rudd slotted in behind.

As Osborne’s lead became unassailable again, second became a four-car battle, with Scott Parkin latching on. Into the chicane for the fifth time, Parkin emerged in third and immediately closed in on Ryan. Within a lap, Parkin was clear in second, taking the flag 4.7s down on the dominant Osborne. Rudd just held onto third from Ryan as the rain returned.

With Osborne starting sixth on a partially reversed grid for the finale, a third win was looking unlikely. Gary Mitchell led initially from Walton, while Osborne was already third by the end of the opening lap. The safety car then made an appearance, and from the green flag Osborne tried to go around Mitchell’s outside at Redgate. As he ran wide on the wet track, he dropped to seventh, with Parkin up to second and Walton duelling with Ryan for third.

With Walton in the Redgate gravel a lap later, Osborne was back to third. He quickly picked off Parkin, before snatching Mitchell’s lead into Coppice with a lap to go to complete his impressive hat-trick. Mitchell was runner-up, while Parkin managed to hold off Rudd for his second podium of the day. 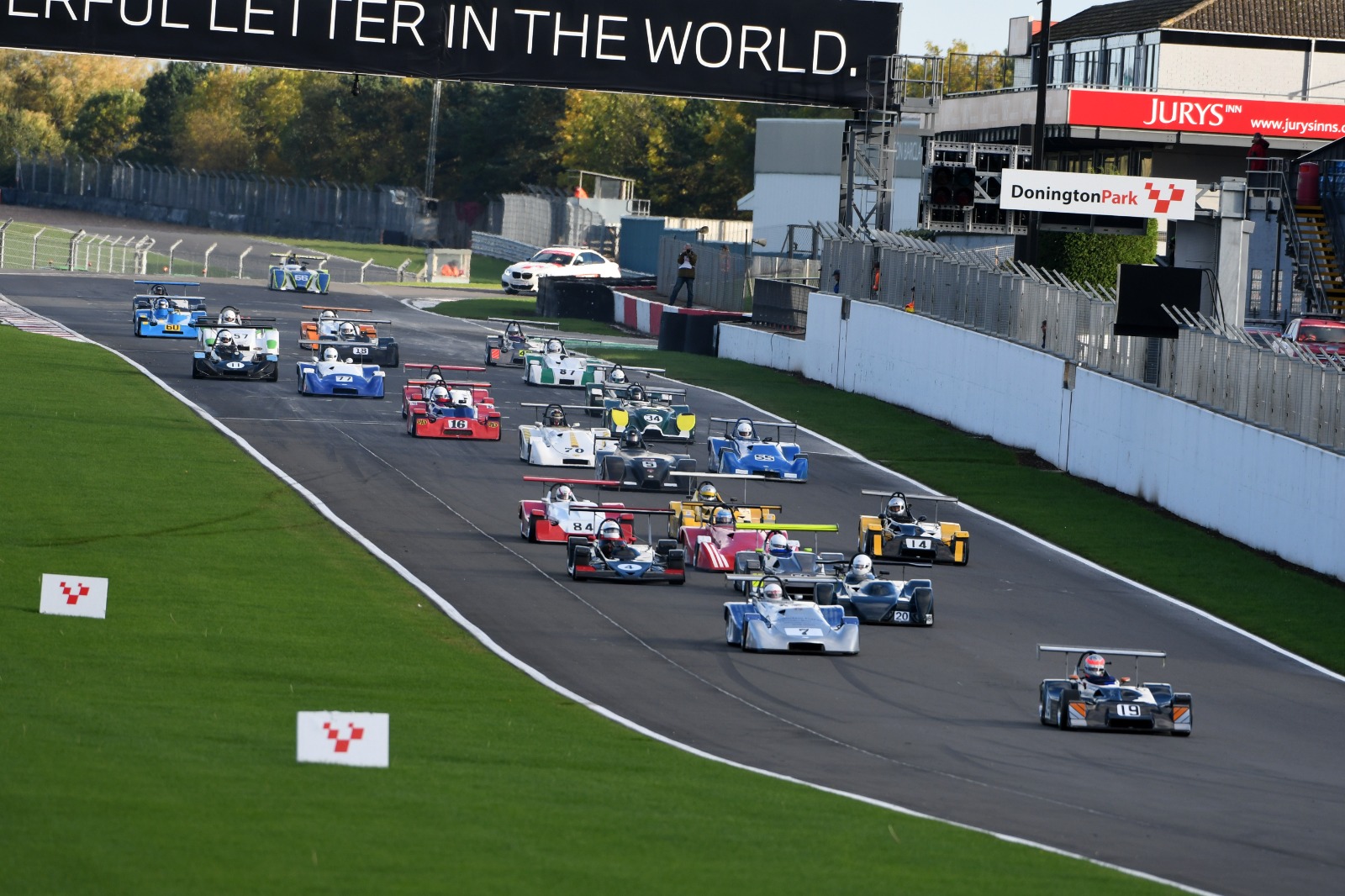 No-one could live with Mark Charteris’s Clubmans Sports Prototype pace. His Mallock Mk21 had already started to build a substantial lead over poleman Mathieu Gauthier-Thornton’s Phantom, which was quicker than the top CSP1 cars in the wet qualifying, in race one when the safety car came out for four laps. From the green flag, Charteris was soon clear again, with Gauthier-Thornton and champion Steve Dickens’s Mallock escaping too, while Peter Richings led a three-way fight for fourth. As the lead trio held station to the flag, Clive Wood’s Mallock hit the front of the pursuers from lap seven of nine.

The second race was red-flagged just before a torrential downpour and it was a lights-to-flag victory for Charteris again. Dickens was second early on, with Richings taking Steve Chaplin (Phantom) for third. But Wood recovered from a first-lap off to claim a late second, aided by Dickens pitting with brake problems. Richings was third.

There was another double winner in the Elise Trophy, with Jason McInulty reigning supreme. He led from the opening lap of race one but, behind him, there was a duel between David Alexander and Alex Ball, split by just 0.218s at the flag, with Mick Edwards a solitary fourth.

Matthias Radestock was in charge in race two, but he couldn’t stop McInulty’s charge through the field. From 10th on the grid, he led into Redgate on lap nine of 12, heading home Radestock, Edwards and Mark Yates.
Chris Bassett’s Peugeot 306 GTI led from the start of the first Track Attack race, but he was almost caught by David Clark (Renault 5 Turbo). Bassett pitted from the lead of race two, leaving Andrew Neal’s 106 with the victory spoils by inches from Clark. 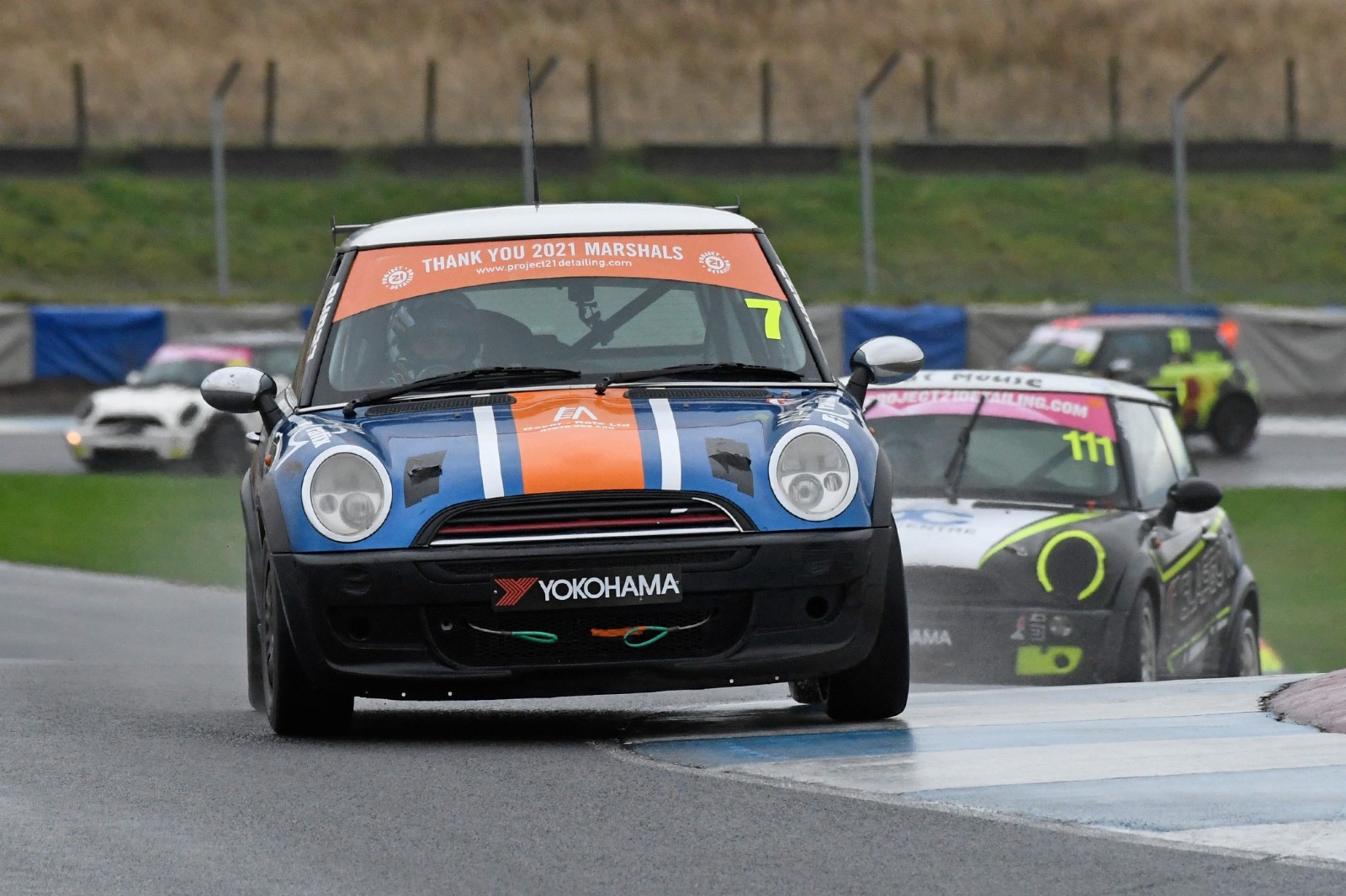 Knockhill was run in the reverse direction for the Scottish Motor Racing Club’s season finale, but there was no reversal in fortunes for Michael Weddell, who sealed the Scottish Mini Cooper Cup crown in the opening race.

The track was damp and slippery after morning rain and the Scottish Minis opened with the two championships running together, but split on the grid. The Cooper S R53 cars started ahead and Andrew Lamont won both races. But the less powerful Cooper Cup cars had three different winners.

Neil Hose passed long-time race-one leader Weddell on the penultimate lap, but Weddell stayed in second and won his first championship title. Hose also led race two until lap four of 12, before Craig Blake grabbed the advantage and held off Hose and Dylan O’Donnell to win.

The third race featured only Cooper cars and the top six finishers were reversed on the grid. From the second row, Chad Little stormed into the lead, but he spun halfway round the lap, handing O’Donnell the place. But Little was on a charge, recovering to lead by lap six, and then pulling clear to win. O’Donnell and Hose battled over second, until Hose went off at the hairpin on the last lap, so Gordon Long took third. 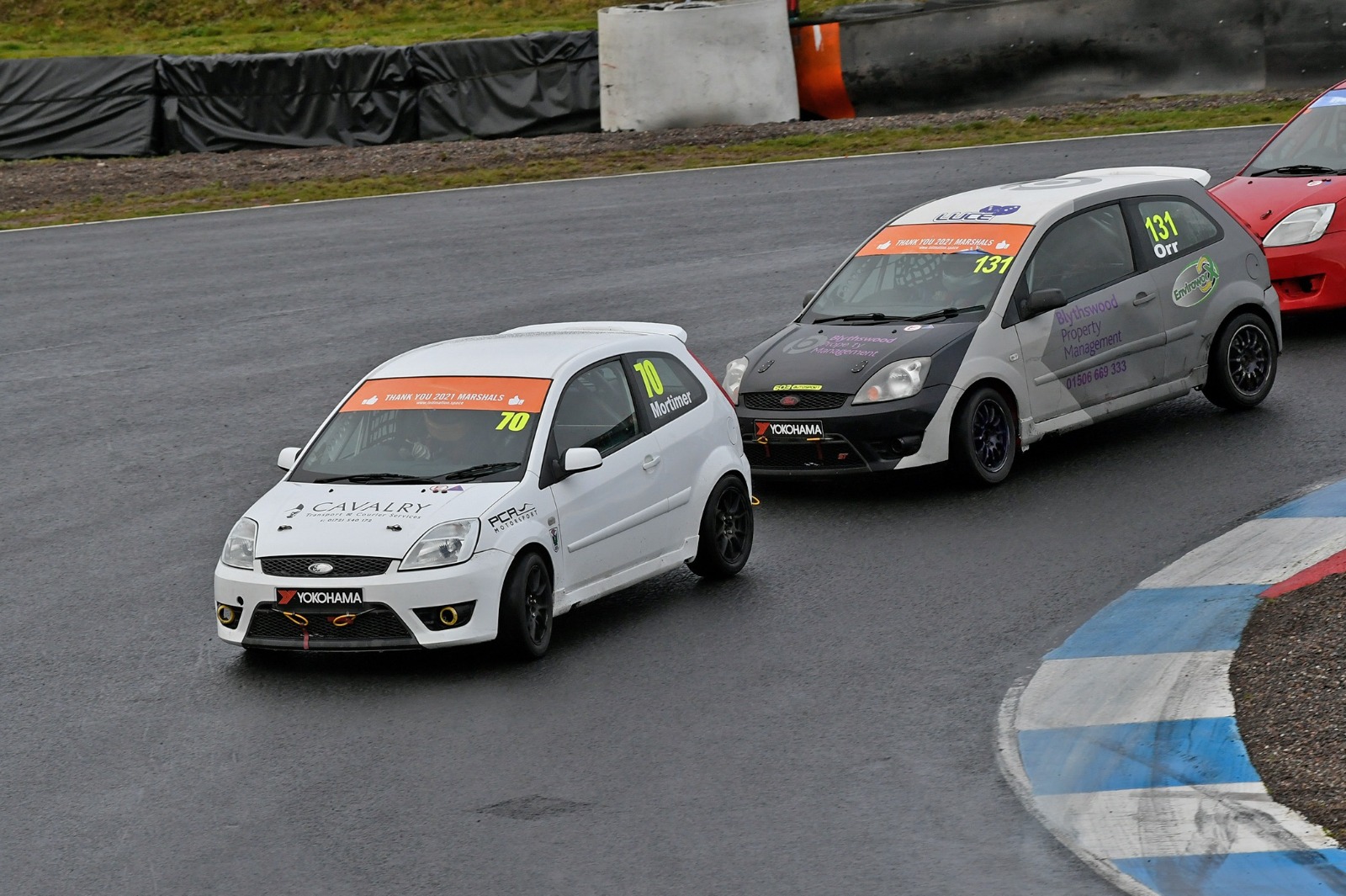 The Scottish Fiesta ST Cup was dominated by three guest drivers. Multiple saloon champion Oly Mortimer took two good wins with the returning 2013 Fiesta ST champion George Orr second both times. Orr dropped to fourth in race one, then got back to second after battling past Mini JCW racer Liam Lambert, who lost third on the final tour to new champion Steven Gray. Mortimer again got clear in race two, while Orr ran with Lambert on his bumper. But Lambert was disqualified post-race for overtaking during a safety car period, promoting Gray to third.

John Kinmond led from pole in the first Scottish Classics race in his Rover SD1. But Shonny Paterson was on the move in his Triumph TR8, demoting the Porsche 911 of Adam Bernard on lap two, before powering past the Rover for the lead as they exited the hairpin mid-race. Second for Kinmond still gave him the championship, while Andrew Graham put another TR8 third.

Race two followed a similar pattern: Kinmond again led from the start and Paterson outbraked Bernard at the first corner to chase Kinmond. They ran nose to tail for a couple of laps, before the Rover slid wide exiting the hairpin. Paterson dived past in the TR8, and then pulled away. Kinmond kept second despite a late challenge from Philip Russell’s BMW 3 Series.

Scottish C1 Cup rookie Sam Corson took two fine wins. In race one, he led home Kyle Nisbet, Ryan Smith and reigning champion Ross Dunn, with 1.4 seconds covering the top four. Corson took the lead on lap two in the second contest from Nisbet, eventually winning from Smith. Dunn ran a close fourth behind Calum Conway and retained the title. His main rival for the crown, Dan Martin, put in an heroic drive from 16th to fifth but it was not enough.