Defending British GT championship-winning outfit TF Sport has been forced to withdraw both its GT3 Aston Martin Vantages due to factors resulting from the COVID-19 pandemic.

Four-time series champion Jonny Adam was due to share with 2014 runner-up Ahmad Al Harthy in one car, while Adam's co-champion last year Graham Davidson was due to share another with graduating GT4 champion Tom Canning.

But due to a combination of factors resulting from the COVID-19 pandemic, neither Al Harthy nor Davidson were able to proceed with their planned programmes and both entries have subsequently been withdrawn.

Multiple business-owner Davidson cited "some fairly sizable delays because of oil industry problems" that had compromised his budget, but told Autosport he expects to be back next year.

"I don't want to go into defending a title on a tight, tight budget," he said.

"I can't test as much as the team would want me to test financially but also due to time constraints, I've just got too much going on right now.

"If I'm doing it then I want to win. I'm very competitive and I don't want to do a half-arsed season".

Testing commitments in addition to the congested season schedule also posed problems for Al Harthy, who would also have needed to find a new team-mate for the two Donington rounds that clash with the World Endurance Championship's Spa 6 Hours and Le Mans 24 Hours, to which Aston Martin factory driver Adam was already committed as part of TF's GTE-Am lineup.

Autosport understands Al Harthy and Canning will compete with TF in an alternative series this year. 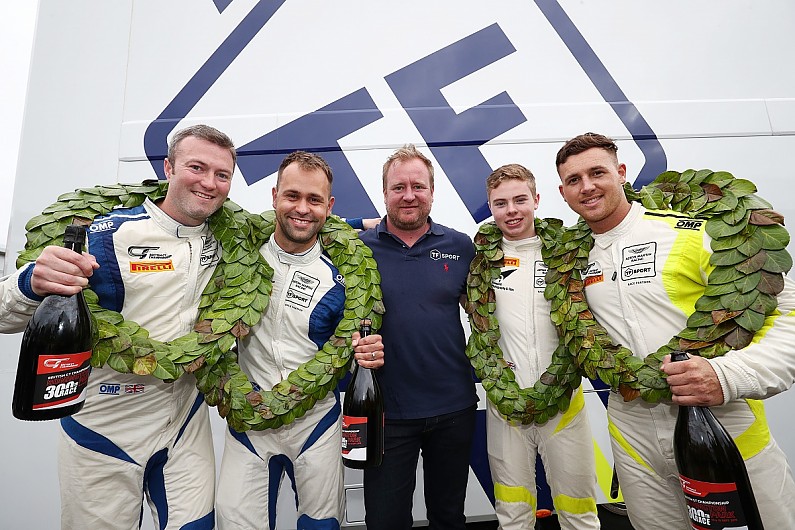 "It's no mean feat trying to run four cars out there and get four separate deals done, so in that sense it is disappointing and it's also disappointing because they were both very strong lineups, so I would have liked to think that we would be fighting again to retain the championship," Ferrier said.

Ferrier added that without TF's clashing commitments, he "would have pushed harder to maybe try and get a GT3 car out" in British GT but didn't rule out making one-off appearances later in the year ahead of a return in 2021.

One of the places on the grid left vacant by TF's withdrawal will be taken by series returnees Duncan Cameron and Matt Griffin in an AF Corse UK-run Ferrari 488 Evo, the new-for-2020 car making its championship debut.

The 2015 Blancpain Endurance Pro-Am champions, who have raced together in British GT on-and-off since 2009, were due to contest parallel campaigns in the European Le Mans Series and International GT Open before swapping the latter for a first British GT campaign since 2017, when confusion over a loophole in the MSA rulebook prevented them from winning at Rockingham.

Cameron, who won't contest all the rounds as he has an entry for Le Mans, is due to complete his first test of the updated 488 on Tuesday.

"We're slightly on the back-foot because it was a late change of plans, so we've not had the opportunity to build a really big testing programme," said Griffin.

"But Duncan and I have always been competitive in every championship we've ever done, so I'm confident that we should be there up the front.

"I can't say that we'll go in and win [races], because it's not a championship that you can say that about.

"There are probably four or five cars that can win the race at Oulton Park, but I definitely anticipate us being one of those cars."

The British GT season will get underway at Oulton Park with a double-header on 1-2 August.