It will be their third season together as a pairing, having taken the GT4 Pro-Am title fight down to the wire in an RJN-run Nissan 370 Z in 2018.

They then wrapped up the championship last year with three class wins in a Beechdean AMR Aston Martin Vantage as the only GT4 crew to score points in every race.

Fletcher, who won Strictly Come Dancing last year, admits that he was "keen to exploit" his existing relationship with Aston but was impressed by his first experience of the JRM Bentley in wet conditions at Silverstone.

Despite his lack of GT3 experience, and former IndyCar racer Plowman's three-year hiatus since he drove a Garage 59 McLaren 650S GT3 in the 2016 Blancpain Sprint Cup, Fletcher told Autosport he was confident the combination could compete for wins and podiums.

"I'm always confident in what we offer as a package with me and Martin as a partnership, and last year our results were showing that," he said.

"We set our sights quite firmly at the top, you want to win races and be on the podium. I'll let Martin set the pace and try to be as close to that as I can."

Fletcher added that the Continental GT3 was the best car he had ever driven in the wet, which gave him confidence in his decision.

"It was a complete joy, very receptive to my inputs, just everything you'd want from a car," he said.

"It felt easier than a GT4 car. You've got more mechanical grip, more aero, it felt really easy to drive and as the conditions improved, the car felt really good.

"You just go with your gut on a lot of things and in my gut it felt like the right decision.

"It's a car worthy of wins and we've just got to make sure that we keep things as simple as possible.

"Every car out there is as strong as each other, and the BOP is done so well by [organisers] SRO that you'd like to think that it's a level playing field." 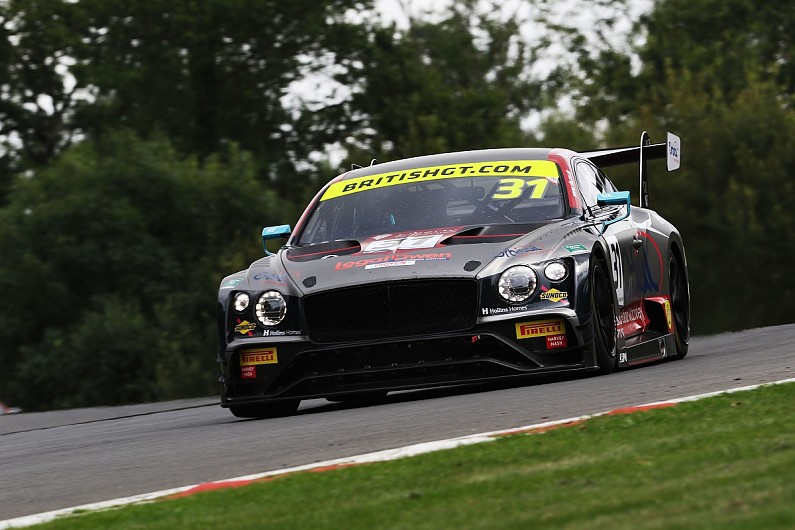 Plowman and Fletcher are the second pairing to graduate from GT4 into a Bentley GT3.

The 2018 Pro-Am champions Scott Malvern and Nick Jones have opted to stay with the same Team Parker Racing squad that clinched the '17 GT3 title with Seb Morris and Rick Parfitt Jr.

Alongside the Silver Cup challenger, the second car will be driven by team returnee Ian Loggie, a winner in the Silverstone 500 with Callum MacLeod last year, and Mercedes factory driver Yelmer Buurman in his first British GT campaign since 2018 with ERC Sport.

Barwell will retain Phil Keen and Adam Balon, who led the standings into the final race, but it has yet to announce its second car.

The Balfe Motorsport McLaren 720S that won the final round of last season at Donington will also return with an unchanged line-up of Rob Bell and Shaun Balfe.

Reigning champions TF Sport have yet to announce lineups for either of their two Aston Martins, while 2018 champions Optimum Motorsport have put the Vantage raced by Silver Cup champions Ollie Wilkinson and Bradley Ellis last year up for sale following Wilkinson's signing as a McLaren professional driver.

But Optimum team boss Shaun Goff said it did not affect his team's plans to return in GT3.