Reddick, 22, left it late to surge to a comfortable victory in a race that didn't have a single caution, and was dominated by final four rival Cole Custer early in the race.

The final four drivers of Custer, Reddick, Christopher Bell and Daniel Hemric ran in the top 10 for the majority of the encounter, and Reddick waited until the third stage to make his move.

Once Custer's team made the wrong decision to stay out when the pit window opened in the third stage, Reddick moved clear into the lead.

The second-year Xfinity driver became embroiled in a battle with championship favourite Bell as the two drivers chose different lines on the circuit in their final stints.

But Reddick - who will remain in the Xfinity Series next year switching to Richard Childress Racing - finally edged clear on lap 163 of 200 to run to the flag unchallenged for a third Xfinity series victory.

Custer then finished second, with a new tyre advantage after stopping four laps later than Reddick proving to be of little consequence after losing track position exiting pitroad.

Hemric, who briefly showed promising pace around the midway point of the race, was fourth behind Chip Ganassi Racing's John Hunter Nemechek.

Nemechek had played the role of spoiler after leading laps despite being out of title contention, before he fell back later on in the race.

Bell finished 11th after he was forced into a pitstop with 12 laps to go following a right-rear puncture caused by brushing against the outer wall.

The Toyota-backed, Joe Gibbs Racing driver's problems had begun when he spun his wheels at the race start and lost his front row position.

Bell had also won more races than anyone else in the series with six victories, with his last at Phoenix a must-win to make the final four.

Justin Allagier, another multiple winner in 2018, was seventh having failed to make the final four.

Reddick was the second NASCAR champion to be crowned after Brett Moffitt's success in the Trucks series. 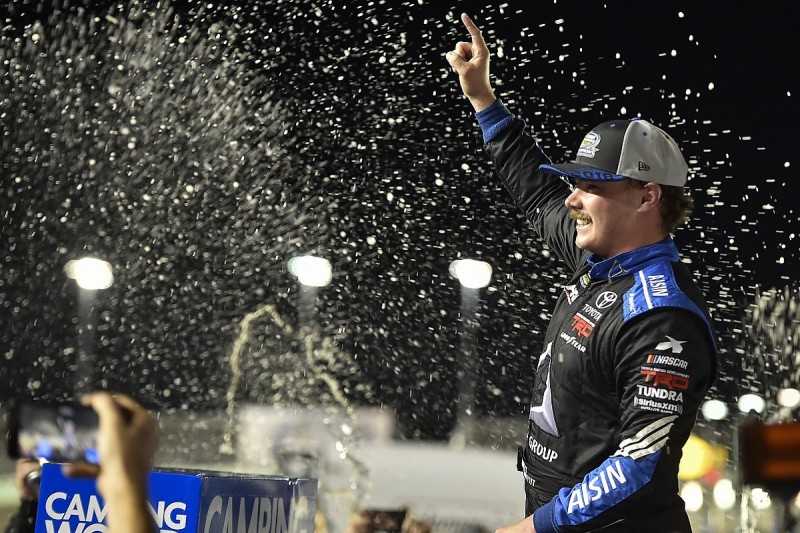 Moffitt was the underdog going into the final four, running for the financially struggling Hattori Racing, owned by former Indycar and NASCAR driver Shigeaki Hattori.

The Japanese-American team almost curtailed its 2018 season as its financial problems mounted, but Moffitt's victory at Homestead earned the squad an unlikely title.

The Hattori driver beat not only Gragson to the title, but Justin Haley and Johnny Sauter.

Moffitt's 2019 plans are currently uncertain, three years after winning the Cup series rookie of the year, and Hattori is also searching for a cash injection.