In a last push to take the lead, Johnson - now on a 51-race winless streak - locked up and spun at the final chicane, collecting Truex and allowing Ryan Blaney to snatch the win.

Johnson got going and crossed the line eighth, but that was insufficient to keep him in the playoffs.

Truex finished 14th and then pushed Johnson into another spin on the slowing-down lap.

"I gave him the inside lane and he had the run through [oval Turn] 4 and I was real tight down there. I let him have the inside coming out of there to the chicane.

"He just overdrove it and was never going to make it and used me as brakes and turned us both around.

"It sucks, we could have raced side-by-side off the last corner for a win and that would have been cool.

"The fans would have been digging it, but instead we finished 14th and he's locked out of the playoffs. I guess that's what he gets." 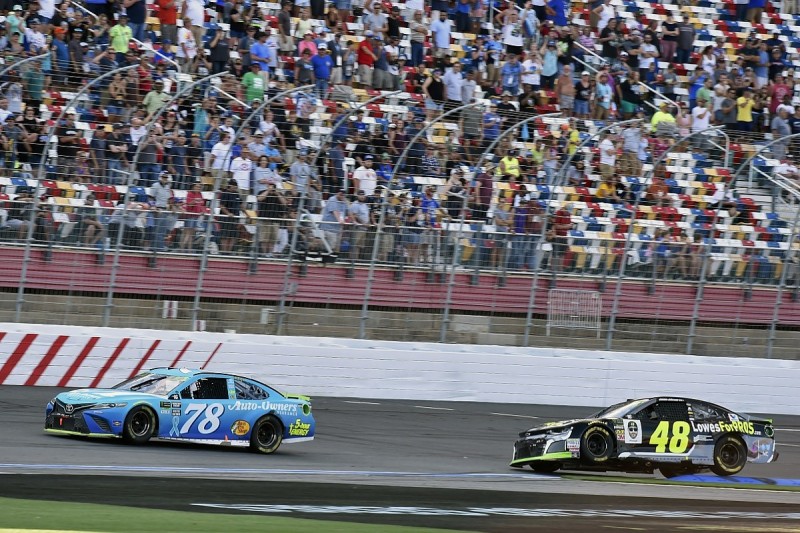 Truex reckoned Johnson had let the pressure of his championship plight get to him.

"He wasn't ever going to make it through that corner whether I was there or not," said Truex.

"It was just desperation on his part and pretty stupid really if you think about it because he was locked into the next round [if he had finished second] and now he's out.

"I guess if there's a silver lining, that's it."

Johnson admitted he regretted the move.

"I just locked up the rears and couldn't control my car and spun," he said.

"I didn't think that I initially got into him, but clearly I did and spun him around.

"Took myself out of a shot at the championship and obviously affected their day, which I feel bad about.

"I wish I wouldn't have been so focused on a race win and I could have transferred and kept my championship hopes alive, but we had such a good car.

"It was just one of those split-second decisions to race for the win instead of for the points and it bit me."

Johnson ended up tied on points with Aric Almirola but was eliminated from the playoffs via countback of best results.

"I knew where I was on the maths," Johnson said. "I didn't think that I was going to crash or spin trying to overtake him like I did.

"I thought I was making a calculated move and giving myself the chance to win and unfortunately it didn't turn out that way.

"I was just going for the win. Wins are so important. And the veteran could have taken a safe route and didn't, and unfortunately took us out of the playoffs and took out [Truex]."