Kevin Harvick grabbed the Phoenix NASCAR Sprint Cup win as Carl Edwards ran out of fuel on the last lap, while Jimmie Johnson moved to the brink of a sixth title

That gives Johnson a 28-point lead heading to next Sunday's Homestead season finale and means he only needs to finish 23rd or higher there to become 2013 champion.

Johnson achieved that result despite two major scares during the Phoenix race.

The first came on the opening lap, when he immediately lost his pole advantage and ended up three-abreast with Denny Hamlin and Joey Logano. Contact with the latter sent Johnson sliding, but he regained control in sixth place.

A host of mid-race yellows prompted a wide array of different pit strategies and a constantly shuffled order, and it was during that period that Johnson was knocked sideways again as Edwards slid into him while avoiding a dive from Harvick.

The points leader stayed out of the wall and continued back in 25th place, but was able to quickly regain ground as the strategies played out and with some assertive driving.

When the race order finally settled for the last 30 laps, Edwards was leading in his Roush Fenway Ford by a second over Kahne.

Harvick's Richard Childress Chevrolet had the freshest tyres of the lead cars and was able to pass Johnson and Kahne in quick succession to take second.

Edwards still looked set for a second Phoenix win of 2013 as he maintained a one-second cushion, until his car ran dry approaching the white flag.

As Edwards trickled to the finish in 21st place, Harvick claimed victory by 1.7 seconds over Kahne, with Johnson next up. 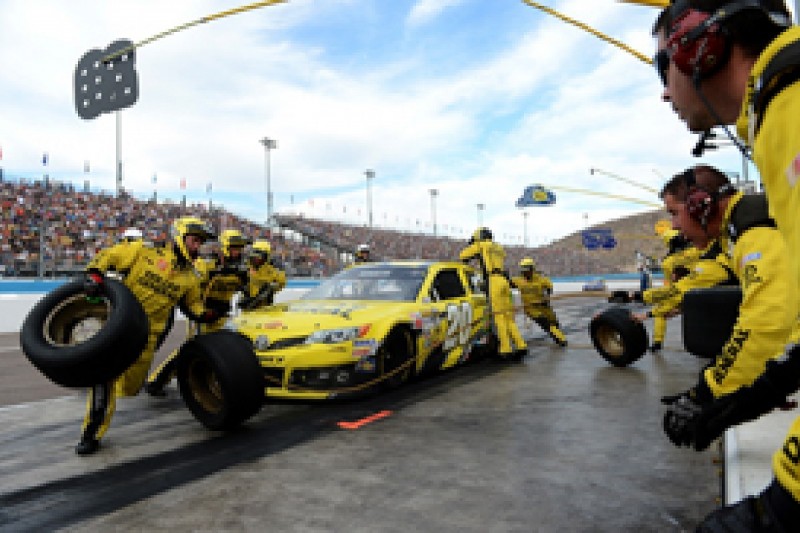 Kenseth was off the pace all day. A terrible mid-race pitstop, just after Johnson's incident with Edwards threw him a lifeline, put Kenseth right back in 29th, and he made little progress, finishing a lapped 21st.

Dale Earnhardt Jr fought back to fourth after a loose wheel left him a lap down in 35th place early on.

Hamlin had led the first 18 laps following Logano and Johnson's brush, but a dramatic loss of pace, a spin and a pitlane speeding penalty dropped him to 28th.