Hamlin had taken pole when the fan vote determined that Friday practice times should set the grid, led the most laps, headed the field at the end of both of the first two segments, and then won the pitstop race that decided the restart order for the final 20-lap section.

Yet despite that on-paper dominance, the Joe Gibbs Toyota driver had to come from the back of the lead pack in the decisive sprint.

He took to the inside of Brad Keselowski and Kyle Busch to go three-wide in a battle for the lead starting the final lap and then edged clear of the pair to secure the first win of the 2014 Sprint Cup season.

Just eight of the 18 cars that started the race - for which only 2013 pole-winners and previous Shootout victors were eligible - got as far as the closing laps.

Reigning champion Jimmie Johnson had spun into the infield wall when running second at the end of the first segment.

The major flashpoint came early in part two, when Matt Kenseth moved down on Joey Logano and was sent spinning. 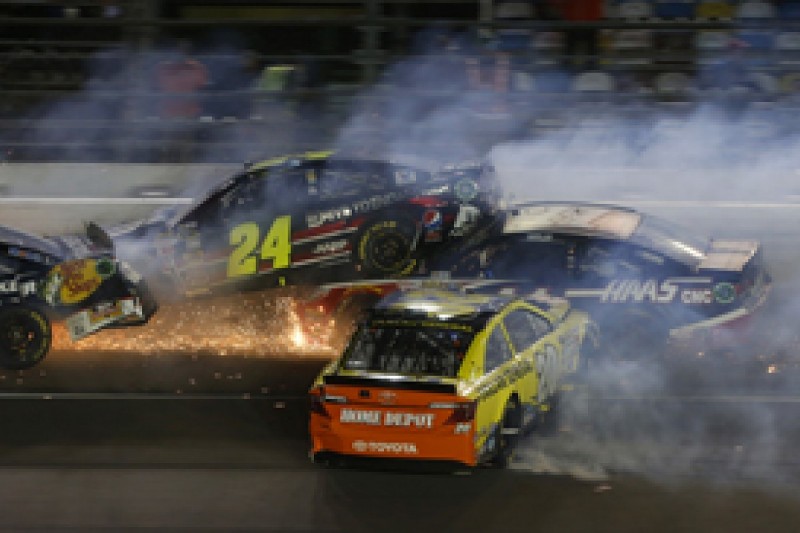 Although a red flag was required to clear up, and only Harvick's car was fit to continue, all drivers involved were unhurt.

There were two more incidents in the final 20-lap segment. While Busch was able to catch a spin - caused by a brush with Keselowski - and rejoin, Dale Earnhardt Jr's night ended when he was helped into the wall by an apologetic Marcos Ambrose.

That left eight surviving cars for the final five-lap shootout, with Penske team-mates Logano and Keselowski battling for the lead with Busch before Hamlin's decisive move.

Logano and Harvick were fourth and fifth. Jamie McMurray, Ambrose and Ryan Newman completed a small and bruised field covered by just seven tenths of a second at the flag.

Not even the course cars got through the night unscathed. A change of pace car was required during the caution for Busch's spin after the original began smoking and then caught fire.