Busch had to be patient in order to move into winning contention late on, as Penske's Joey Logano swept the first two stages in a clean start to the race.

The one-time Cup champion kept himself in the lead pack as the third stage began and was into third with just 50 laps remaining.

When Penske's Ryan Blaney, Cole Whitt and Ryan Newman collided and brought out the full-course caution, Busch followed the ever-improving Martin Truex Jr and Stewart-Haas Racing's Harvick - who had driven from the back of the field after an early penalty - into the pits.

Busch returned to the track in third but quickly went around the outside of Harvick for second before another caution arrived when Newman's engine appeared to blow with just 33 laps of 400 remaining.

He was then able to depose Truex and held on when David Ragan caused the final caution inside the last 10 laps.

The victory meant Busch matched Harvick's benchmark of three wins in a row just a day after claiming his rival was still better than him in 2018.

Hendrick Motorsports driver Chase Elliott benefitted from that late caution to go second, his best result of the 2018 season, in his Chevrolet Camaro.

HMS had shown further signs of getting to grips with the 2018 Camaro when team rookie William Byron ran fifth in the second stage, but it was Elliott who gradually worked his way back to his starting position of second after falling to the fringes of the top 10 in the first stage. 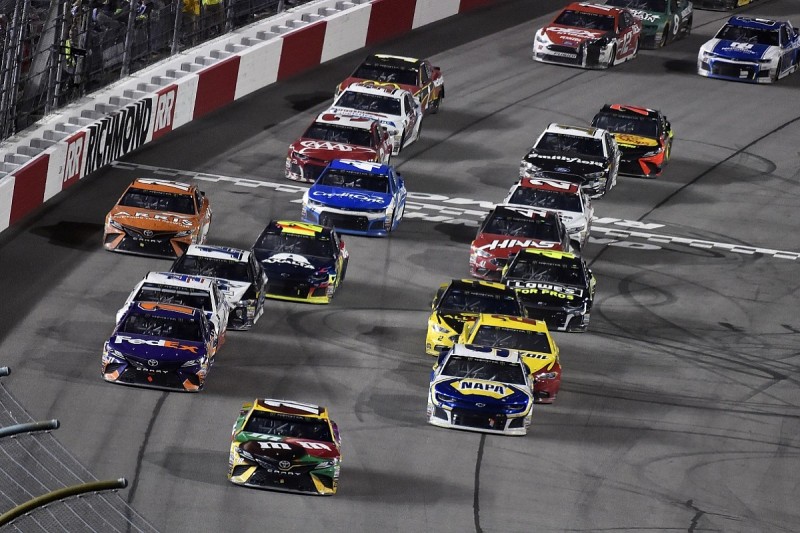 Busch's team-mate Denny Hamlin was third ahead of long-time pacesetter Logano, who fell back in the late cautions.

Harvick was fifth having returned to the fore following a pitlane infraction for equipment going over the pitwall that sent him to the rear of the field.

Seven-time Cup champion Jimmie Johnson finished sixth after contact with the outside wall earlier in the race while working his way up from 17th on the grid.

Truex mistimed his final pitstop and fell to 14th while Kurt Busch also dropped out of winning contention to 11th.