New Chip Ganassi Racing recruit Matt Kenseth is "excited" to make his NASCAR Cup return at this weekend's Darlington round, as he replaces Kyle Larson at the team

Kenseth was drafted into the #42 car after Larson was released from his Ganassi contract for using a racial slur during a NASCAR-sanctioned iRacing event.

Having last raced in NASCAR in 2018 during a bit-part campaign for Roush Fenway Racing, it will have been over two years since Kenseth was last behind the wheel of a Cup car.

To make the learning curve even more challenging for the veteran driver, he will enter Darlington with no practice or qualifying; his first lap back will be the opening lap of the race.

Although estimating that he has only run "about fifteen minutes" on the simulator, Kenseth is confident in his ability to adapt to the situation.

"Nobody has been in a car in a while; certainly, it's been longer for me," said Kenseth.

"I think the biggest difference for me, also, is that I haven't driven these race cars or for this team.

"So, there are a few more unknowns. I'm not sure how exactly everything is going to feel and all that kind of stuff.

"There is certainly a little bit of anxiety for those first few corners to kind of get rolling and get used to things. 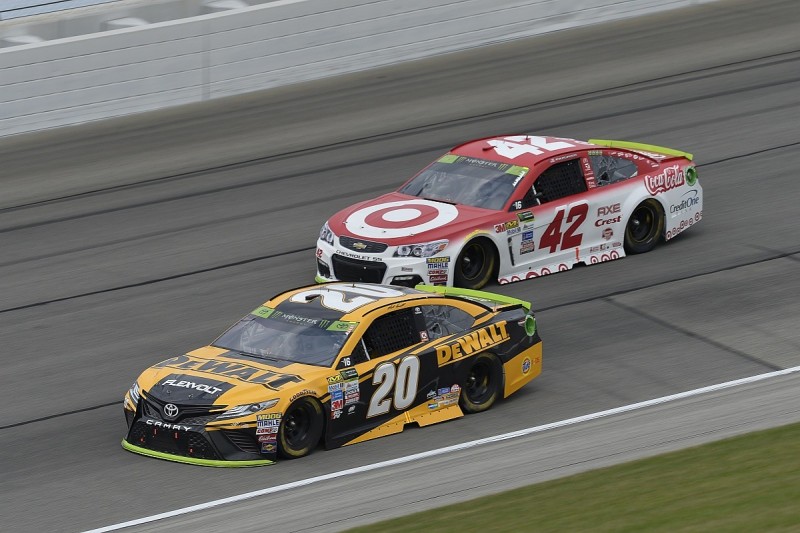 "At the same time, everybody is going to be ready to pounce.

"Restarts are very important, track position is very important; I don't expect people to be taking it real easy or maybe giving you a bunch of extra room or anything like that.

Kenseth will also have to adapt to NASCAR's new-for-2020 aero package, and learn to work with a new team at one of the most challenging tracks on the schedule with no track time.

The 48-year-old will be running the remainder of the 2020 season with Ganassi and has been granted a waiver from NASCAR, making him eligible for the playoffs should he make the 16-driver field.

"Right now, I'm not really looking too far beyond Sunday, to be totally honest with you," he said.

"Certainly, the learning curve is going to be steep, and I know being out of the car that long, starting with a different team and piling on top of not being able to practice for the foreseeable future, or testing and anything like that, is going to be very challenging.

"But, I'm really excited. I have to admit, I'm just as excited as I've been to go racing in many, many years.

"I'm really looking forward to the opportunity, I just know that it's going to be a big challenge.

"You know everyone is going to be out there ready to pounce on whatever spot they can, so you just have to be smart.

"Especially for me, just be smart and get through those first bunch of laps to get in a rhythm, get a little bit of room to move around, breath, get kind of acclimated, and go from there."