Busch in the #1 Chip Ganassi Chevrolet had not followed the leading pack, headed by Denny Hamlin, in pitting midway through the final stage, and benefited when Jimmie Johnson's car shed its right rear Goodyear tyre, bringing out the caution flags.

While Hamlin and the rest of the leading gaggle, including Alex Bowman who undercut Hamlin during these stops by pitting on lap 232, dropped to a lap down, Busch - the sole driver in Playoff contention who did not pit - was able to take his stop and restart in second place, behind Wood Brothers Racing's Matt DiBenedetto.

Busch took the lap 243 restart on the inside line and muscled past the #21 of DiBenedetto to take the lead, before a John Hunter Nemechek spin seven laps later once again neutralised the race on the 1.5-mile oval circuit.

Hamlin, who was running in 11th place then led a charge to pitroad of those who had lost out under the Johnson caution, with the likes of Kevin Harvick, Martin Truex Jr, Alex Bowman, and Chase Elliott followed the #11 Joe Gibbs Toyota for fresh rubber.

Bowman and Hamlin quickly began to carve through the field, before a final caution for William Byron's spin after Christopher Bell's car suffered a tyre failure. This sent the race into overtime, with none of the leaders opting to pit ahead of the two-lap shootout.

Busch took the restart ahead of DiBenedetto, Ryan Blaney, Bowman and Hamlin, and quickly dropped the chasing pack, whilst Hamlin tried to fight his way past Blaney. 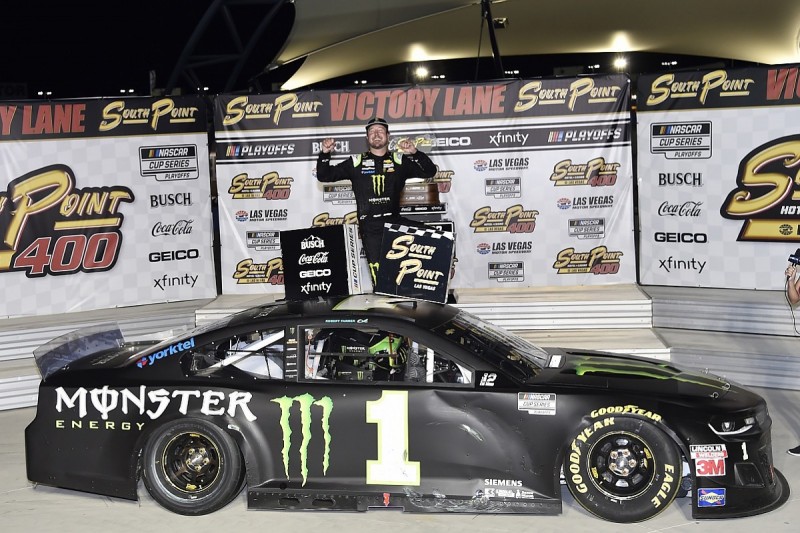 Busch, who took 16th and 17th respectively in stages one and two, was untroubled throughout the overtime period, allowing the 2004 Cup champion to record his first win of 2020, 33rd of his career, first since Kentucky in July 2019, and ensure his place in the Round of 8 of the Playoffs.

DiBenedetto equalled his best result of the season with second in his Ford, which also came at Las Vegas in February, ahead of stage two winner Hamlin, who scored his first top 10 finish since the Daytona road course race.

Erik Jones followed up third last time out at Bristol with eighth for JGR, ahead of Chris Buescher and Harvick - who recorded his 25th top 10 result of 2020 in an otherwise quiet afternoon for the polesitter in his #4 machine.

Seven-time champion Jimmie Johnson was hit with a pitlane speeding penalty midway through the 268-lapper, but fought back well to claim 11th, ahead of Penske duo Brad Keselowski (13th) and Joey Logano (14th). Logano had been a lap down for a majority of the race following lap 88 contact with Kyle Busch left the #22 with minor damage.

Elliott had looked comfortable out in front during periods of stage one, which the #9 Hendrick driver claimed ahead of Hamlin, but struggled in the latter stages, coming home 22nd.

Austin Dillon, who had been the star of the Playoffs with a strong Round of 16 looked set to continue his good form in his #3 Richard Childress machine, banking a pair of sixth place finishes in the two 80-lap segments.

However, a suspected piece of debris damaged belts inside the engine of his Camaro, which led to a power steering failure, and left the #3 seven laps down in 32nd position at the flag.