Busch was leading with 31 laps remaining, ahead of championship rivals Martin Truex Jr of Furniture Row Racing and Stewart-Haas Racing's Kevin Harvick, having stopped for fuel and tyres after Derrike Cope caused a caution.

But on lap 139 of 160, a caution caused by debris led to Busch's crew calling him into a stop while Truex and Harvick remained on track.

He restarted the race in eighth before climbing to the rear of the second-placed car of Chip Ganassi Racing's Kyle Larson, but remained third as Truex won.

Busch believed he was "damned" either way on strategy, having lost at Pocono last year by remaining on old tyres in favour of staying in clean air, which was the opposite of his 2018 call.

"We came back down for tyres and I don't know what it was [that prevented similar early race pace]," he said.

"I don't know if it was the clouds or different tyres, but those tyres didn't mean anything.

"We couldn't get back up through there for anything back up to those guys. It [pitting] didn't give any advantage. That was frustrating and disappointing. 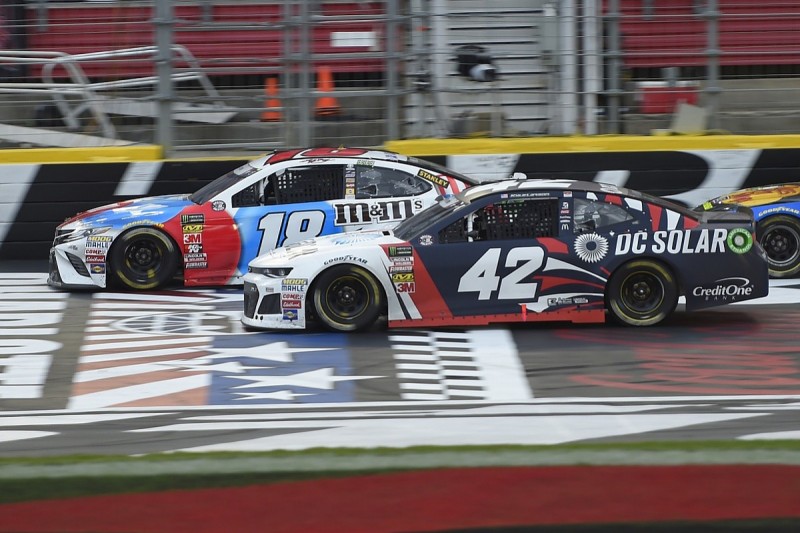 Busch joked that he hoped Larson would have helped his momentum on the final restart.

"I thought Larson and I had a pretty good run there on that final restart where I pushed him back up to the back of the #78," he said.

"He [Larson] didn't hit him enough in order to get him [Truex] up the track a little farther so I could squeak on under there and have a three-wide battle and probably a whole bunch of fire and flames and parts on the outside of the racetrack in Turn 2. Maybe next time."

Busch now holds an 87 point lead over Harvick in the regular season standings.