Reigning NASCAR Cup champion Martin Truex Jr believes he was "too nice" in Saturday night's Bristol race, where he was taken out by Kyle Busch in the closing stages

Though Truex was involved in a multi-car pile-up - started by Busch spinning - on only the second lap of the race, he recovered to battle Clint Bowyer for the race lead going into the final 70 laps of the 500-lap event.

But his race ended when Busch tapped him into a spin, during which Truex hit both the inside and outside barriers and was collected by JJ Yeley's Premium Chevrolet.

"I just got hit in the left rear. Pretty simple. It's a shame," said Truex.

"We had a good night going. Started off rough. Battled hard and got the car pretty good there."

Asked if he thought the contact was intentional, Truex replied "I couldn't tell you".

He suggested Busch might have been affected by the resin treatment on the track surface wearing out, and admitted had he raced Bowyer harder and got away he could have avoided the incident.

"I'm sure he hit one of them. Probably didn't obviously do it on purpose, but it's hard Bristol racing.

"Half his fault, half my fault for following [Bowyer] so long.

"I should've knocked his butt out of the way because he held me up for 15 to 20 laps and I burnt my front tyres off screwing with him.

"Played too nice and got the crappy end of the stick.

"I feel like I probably should've taken the lead there and I wouldn't have been in that position.

"Sometimes you're the nice guy and you get knocked out of the way."

Busch said he had not intended to take Truex out of the race.

"Hopefully, he's alright and everything is OK there," he said.

"I hated that I clipped him. I know he could have had a good shot to win the race too." 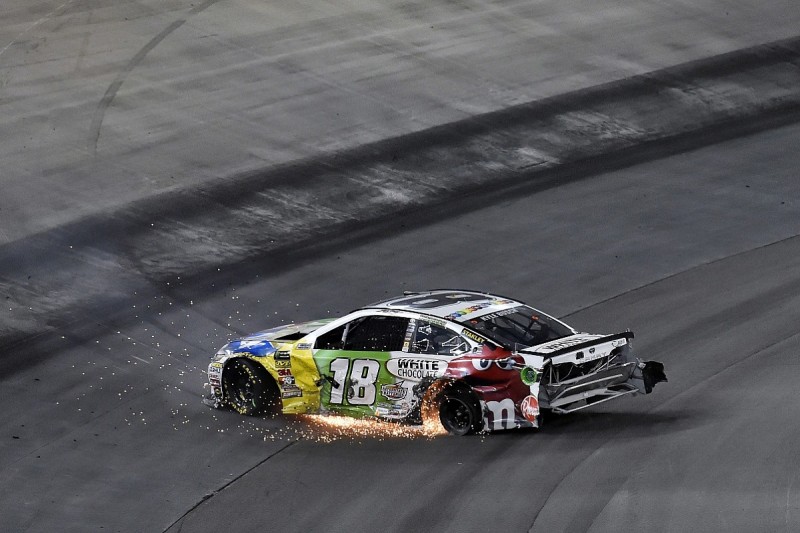 Busch continued after the Truex clash but ended up only 20th having cut a tyre in what he called "stupid circumstances" with Chris Buescher and Jimmie Johnson in the closing laps.

"Even torn up and wrecked and everything else, it was fast," said Busch of his Joe Gibbs Toyota.

"It just wasn't meant for us this weekend, I guess."

He was also baffled by the crash he had triggered at the start of the race.

"I wasn't even pushing that hard, I was just trying to maintain [position] and not get hit and I ended up sliding up the racetrack and spinning myself out," Busch explained.