Busch was first across the line in the final 10-lap, fourth segment of the race after three previous 20-lap stages, to claim his first victory at Charlotte.

He made a smart move on the final restart after the end of stage three and ran out the eventual winner, having fended off the baying Larson and Jimmie Johnson.

The final stage consisted of Busch, previous stage winners Larson (stages one and two) and Johnson (stage three) and seven other drivers with the highest average finish in the first three stages.

Brad Keselowski led on the final restart, but only after he had run out of allocated tyre sets and didn't enter the pitlane in the caution after stage three.

Larson bumped him out of the way immediately on the restart but, as Keselowski fell to ninth, Joe Gibbs Racing's Busch took advantage instantly as both Larson and Johnson had to avoid a suddenly slowing Keselowski.

Chip Ganassi Racing driver Larson made an overtake late on, sliding underneath Johnson's car to cap off another solid performance, but could not catch Busch and had to settle for runner-up spot for a second year running - missing out narrowly as he had done in 2016. 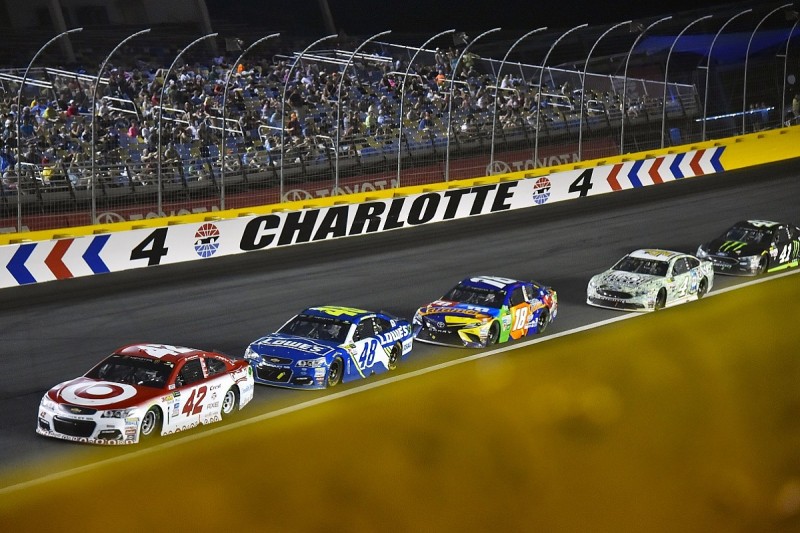 Kurt Busch and Jamie McMurray were unmoved from their stage three finishes ending up fourth and fifth in the final respectively, ahead of Kevin Harvick as the final 10 laps offered little time to overtake.

Chase Elliott qualified for the All-Star Race after winning the online fan vote for a second consecutive year.

He finished seventh in the final, having finished eighth in stage three.

Team Penske drivers Keselowski and Joey Logano struggled for pace in the final 10 laps and finished eighth and ninth, while Denny Hamlin was last in the final having suffered damage as a tyre was rubbing against the JGR Toyota's body.

Each team was given one set of faster 'option' tyres to use at anytime during the 70-lap race, but if they chose to use them in the final stage then its driver would start at the back - a gamble no one ultimately sided with.

Only four sets of tyres were available for the whole race, making it compulsory to use the faster but rapidly-wearing soft compounds at some point.

Controversially, Clint Bowyer and Ryan Blaney, who by the third stage had average finishes over 10th place, took only two tyres and restarted in the lead for the third stage in a desperate dash for the final shootout.

Their crew chiefs found a loophole in the rules that made no specification for mixing used tyres and new tyres but with soft tyres on the left-hand sides of their Fords and hards on the right, they slowed to mid-pack and were eliminated for the last sprint.