Bowyer had run within the top 10 throughout the race. He was third in the opening stage and finished stage two in second place behind his SHR team-mate Kevin Harvick.

Rain had initially delayed the start of the race by over two hours. With the threat of rain returning, Bowyer's team opted to fit only right-side tyres at the pitstop phase at the start of the final stage. With Harvick and the rest of the frontrunners taking four tyres, Bowyer took the lead.

He successfully defended first place in a close battle with Harvick during the four laps that actually ran in the final segment before Ricky Stenhouse Jr was pitched into the wall after a nudge from Kasey Kahne.

The resulting caution for Stenhouse's spin turned into a red flag as the rain returned.

With 67 laps of the 200 remaining, the race was ended. Bowyer's victory was confirmed and full points awarded with the race having passed the end of stage two. 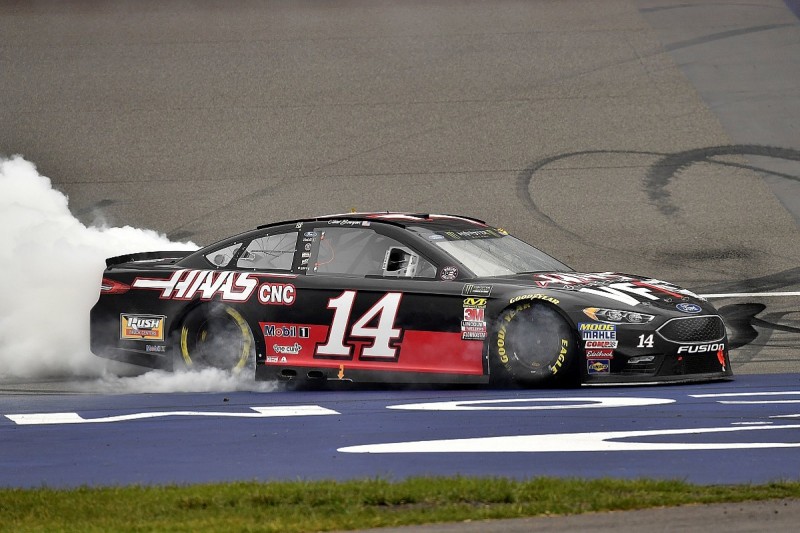 Harvick's stage two win was his eighth of the season en route to second place. In third was his SHR team-mate Kurt Busch, who led the opening 46 laps of the race having started on pole but slipped down the order after losing ground on restarts.

His brother Kyle Busch ended up in fourth place. Busch was one of three Joe Gibbs Racing Toyotas to be sent to the back of the field to start the race following an issue with their splitters during pre-race inspection.

Busch had climbed to 12th by the end of stage one and made further progress through stage two, only narrowly missing out on third after battling with brother Kurt prior to the red flag.

Paul Menard finished in fifth place. He was propelled into contention during a lap 85 caution after Chip Ganassi Racing's Kyle Larson spun out of eighth place.

Menard, who was running outside the top 10, chose not to pit under the caution that followed and cycled to the front.

He successfully managed his fuel to the end of stage two, finishing in fifth and retaining the place until the finish.

Blaney won the opening stage. He lost ground during the restart to open stage two and then dropped further down the order along with Keselowski when the pair opted to take four tyres rather than two during the lap 85 caution.

Chase Elliott ended the race in ninth place, despite being demoted to the rear of the field after making a pitstop before the pitlane was open during a lap 56 caution. His recovery resulted in him finishing as the top Chevrolet.