A caution was brought out just six laps before the chequered flag when Ross Chastain, filling in for Ryan Newman, spun the #6 Roush Fenway Ford.

All but seven cars came into the pits for fresh tyres for the sprint to the flag, with Logano leading William Byron, Ricky Stenhouse Jr, and DiBenedetto among the pack that stayed out when the race resumed with two laps remaining.

Logano held onto the race lead while DiBenedetto pushed past Stenhouse and Byron to take second, and was close behind the Team Penske Ford driver when Logano began the final lap.

Behind the leaders, a handful of mistakes in the crowded pack led to a multi-car accident, which involved Byron and long-time race leader Kyle Blaney and led to the caution being thrown as a number of drivers spun or ran wide to avoid other cars.

As Logano had already taken the white flag, the final lap was called and the race ended under caution.

He therefore took the win half a second ahead of DiBenedetto, who had spent most of the race in the bottom half of the top 10, and Stenhouse.

Austin Dillon and Bubba Wallace also benefitted from not pitting before the final restart.

Neither driver had featured towards the front of the field for much of the race, but found themselves sixth and seventh with just two laps remaining.

Both managed to avoid the drama at the start of the last lap to finish fourth and sixth, with Jimmie Johnson splitting the pair. 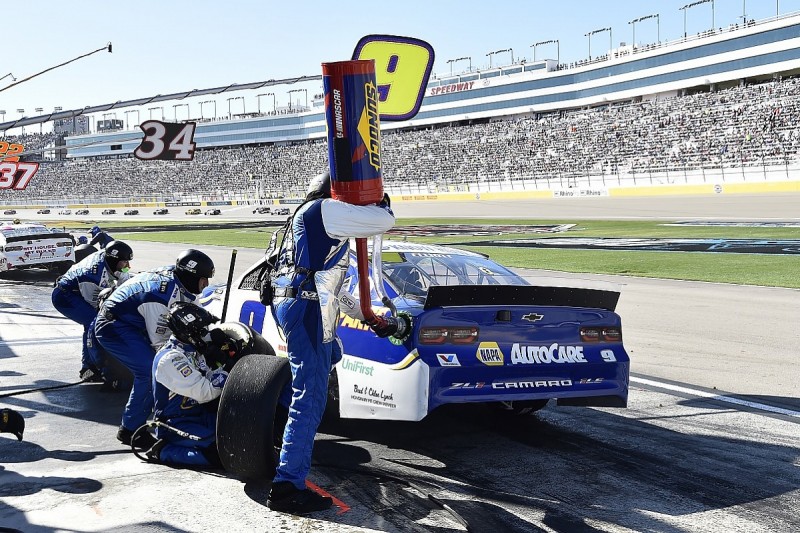 Chase Elliott won the first two stages, and the Hendrick Motorsports driver controlled the first half of the race.

Though Logano and Blaney briefly claimed the race lead early in each stage, Elliott was the fastest driver on track throughout the first two stages.

Throughout the first half of the race, he was kept under pressure from Martin Truex Jr, but things came undone for Truex in the final stage.

He was forced to come into the pits at the start of the final 107-lap stage as the wheel lugs had not been tightened during his previous stop.

He then suffered a puncture, dropping him towards the back of the field.

Elliott continued to fight at the front of the field, though the pitstop cycle had shuffled him back to eighth when a flat tyre sent him into a spin 47 laps before the finish.

Kyle Busch, who should have started on pole after Saturday qualifying was rained off, started the race from the back of the grid, along with Joe Gibbs Racing team-mate Denny Hamlin, due to unapproved body modifications.

Both made good progress through the field, with Busch briefly running inside the top 10 in the closing stages of the race. They took the chequered flag in 14th and 17th respectively.

Brad Keslowski picked up seventh, having benefitted from running an alternate pit strategy early in the race.