Stenhouse caused a 20-car pile-up at Daytona when he spun the blocked Penske car of Brad Keselowski into oncoming traffic, and he was then involved in several incidents later in the race.

Reigning champion Martin Truex Jr said that the multiple incidents, some without Stenhouse's influence, were "desperate" and down to drivers "winging it".

Ahead of this weekend's Kentucky race, Busch was asked if Stenhouse had reached out to him after the Roush Fenway Racing driver ended his race in a crash.

"He [Stenhouse] did not reach out," Busch said. "I am disappointed that he did not.

"He wiped out half the field. Pretty sure there would be a pretty busy Monday for him, but there wasn't, so apparently he just doesn't care." 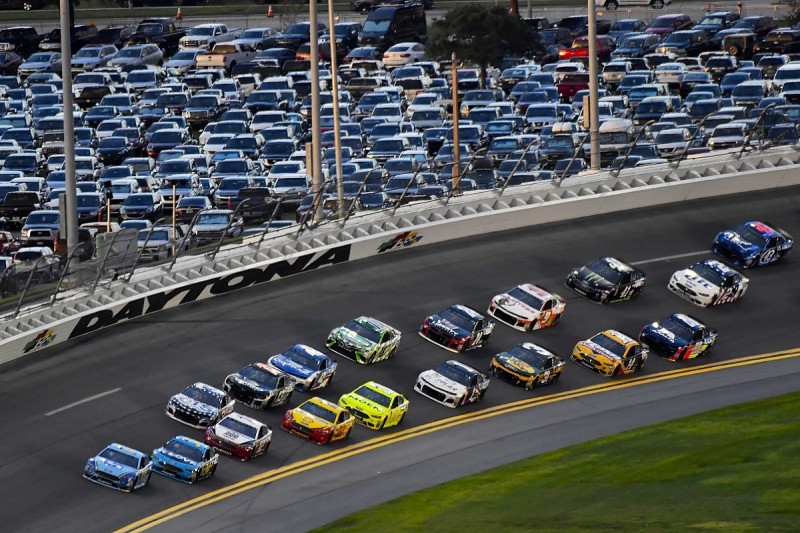 When asked if Stenhouse's driving would force him to alter his approach, Busch added: "I can't worry about people that far back in the field.

"But if you actually have some remorse and you're apologetic, or you need to be, then I tend to reach out when I make mistakes or when I do things I feel like hinder other drivers.

"I always reach out and say something like: 'Hey, man, I hated that I got into you. I'm sorry'.

"Whatever. It's not going to change the fact, but at least take that step [to apologise], that's just my mindset. Other drivers have different mindsets."

Stenhouse, whose best finish this year is fourth at Bristol and lies 16th in the standings, then explained his talk with Busch to broadcaster NBCSN.

"I felt like he ran his mouth enough on his radio and then after the race that I didn't really have anything to say to him.

"I normally do reach out to people when I make mistakes and I clearly made a mistake, but with him running his mouth, I just felt like I don't really need to call him, so I just let him know that."

When Busch's comments about running further up the field was put to him, Stenhouse said: "I told him you're right, you do run a lot further up front, but pick and choose your battles wisely.

"You will have to deal with me sometime whether you're lapping me or we get our cars better and we're up there racing with you.

"I told him if he wanted to keep running his mouth, he can come over and do it around me and I'll stop it for him, for myself."

Busch will start the race in fifth, nine places ahead of Stenhouse, with pole taken by Truex.