Busch was eventual winner Martin Truex Jr's biggest championship threat in the closing laps, despite an attempt to deploy an alternative strategy being hurt by elder brother Kurt Busch spinning and bringing out a caution.

Kyle Busch then found himself jumped by Logano at the final restart and spent several laps struggling to find a way past the Penske Ford so he could attack title rivals Kevin Harvick and Truex ahead.

"I was battling with the #22 [Logano] and just wasting too much time with him. He held me up," said Busch.

"He was blocking me every single chance he got, so Truex had a real buddy there."

Busch added that increased tyre wear incurred battling with Logano left him ill-equipped to challenge Truex when he caught the leader.

"It came down in the end to not having enough tyres left when I got to Truex, so I over-used my stuff," said Busch.

"I knew I'd over-used it when I was running with Logano, trying to get by him and just overworked everything.

"It wasn't quite what we wanted there at the end."

Busch conceded that Truex was a deserving winner of the championship title, but said he had the quicker car in the race.

"They deserved it, probably like any other race, but today I thought we were better," said Busch.

"It doesn't matter, though, as they were out front when it mattered most.

"It's just unfortunate for us that the caution came out and ruined our race strategy.

"We couldn't get back to where we needed to be." 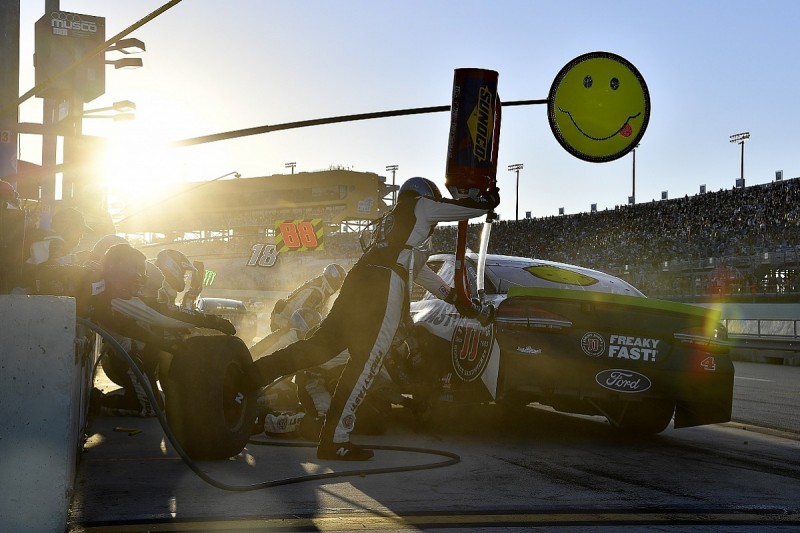 Harvick had made into the final four thanks to a surprise win at Texas and believed his and Stewart-Haas's efforts were championship worthy.

"It was great to have a chance. We were in the mix all day," Harvick said.

"We didn't quite have what we needed at the end.

"I think when you look at it from the inside out and all the work that everybody went through, the preparation that we went through to get to these playoffs was second to none.

"It was a championship effort. We just came up a little bit short. Congratulations to Martin.

"Those guys have been the dominant car all year.

"To go win the race and make it happen at the end, they were able to get their car better and win the championship."